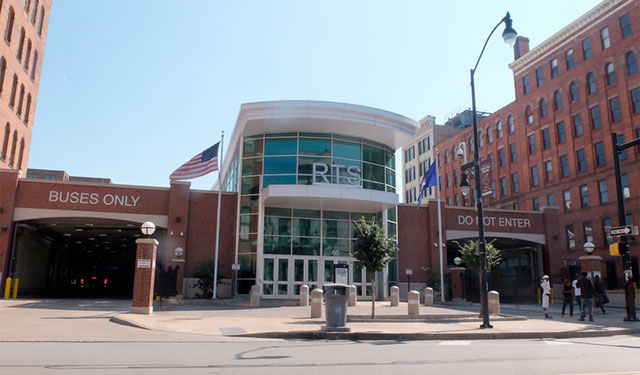 ROCHESTER — The Regional Transit Service has completed the first phase of the “Reimagine RTS” overhaul of its bus-route system.

“We still have a lot of work to do before we announce what the entire system will look like … (but) it aligns with the resources we have and our new reality,” noted RTS Chief Executive Officer Bill Carpenter during an Aug. 2 press conference at the company’s offices on East Main Street.

The redesign was needed at this time because the public transit system was designed decades ago, according to Carpenter. Since that time, the area’s demographics and locations of employment centers have changed, and RTS is trying to better meet the needs of business owners, senior citizens, millennials, individuals with disabilities, and those working to transition from poverty to prosperity, according to reimagine.myrts.com.

The Reimagine process began last fall with the hiring Transportation Management & Design (TMD), a transit consulting firm based in California, to examine the existing routes to recommend a redesign of the fixed-route system, he explained.

TMD began with a review of ridership data and how frequently routes are used.

“The city represents the majority of our ridership,” Velázquez said.

Additionally, RTS conducted three community surveys that elicited 14,000 responses, and also hosted 150 public meetings throughout the area and at pop-up events at the Rochester Public Market or the RTS Transit Center in downtown Rochester. In May, TMD provided draft recommendations that were modified, and a final report issued in July, Carpenter noted.

The consultant’s recommendations include:

• Implementing a new fixed-route system with 30 routes that run seven days a week, up from the current five days a week. The redesign will include 10 new frequent-use routes to offer service every 15 minutes on weekdays from 6 a.m. to 6 p.m.

• Offering seven community mobility zones to provide bus access to the 5 percent of current customers — largely in Rochester — who are not within walking distance of the fixed-route system. Options include using shuttle-size buses to be more efficient for routes with fewer riders in these zones vs. the current use of buses that are 40 to 60 feet in length.

• Creating 10 connection hubs throughout the proposed system in Monroe County where multiple routes come together. The hubs would facilitate connections with multiple transportation modes, such as ride-sharing services, in community mobility zones and allow for transfers between the fixed system and community mobility routes yet to be designed.

In addition to offering a better design for the fixed-route system in the community, TMD’s recommendations align with the Rochester-Monroe Anti-Poverty Initiative recommendation of high-frequency cross-town transportation, Carpenter noted.

The proposed routes would provide bus service within walking distance of the homes of 95 percent of current customers, he added, and an additional one-third of all jobs in the Rochester area will be at locations accessible by bus.

“These are big improvements,” he said.

Any questions and concerns about the proposals in the TMD report will be answered in upcoming sessions over the next year, during which RTS also will work on improving its service to those with disabilities, Carpenter said. Filling in gaps identified by the community will be part of the company’s next steps, Velázquez noted.

“Nothing will take effect or change for at least two years,” Velázquez said, adding that RTS’ goal is to have a new system in place by summer 2020.

Stephanie Townsend, a Pittsford Town Board member, has concerns about the proposed elimination of fixed routes to the suburbs. While RTS riders may largely live in the city, many employment opportunities are found in the suburbs, she said. Connecting city residents to those opportunities must be at the forefront as RTS fleshes out the details of the community mobility zones, she noted.

Additionally, there are town residents who depend solely on RTS for transportation, she said, noting that she also has concerns about private partnerships RTS is developing to provide transportation to certain employers outside the city.

“I fully understand the need to reimagine public transportation for the 21st century that doesn’t meet people’s needs today,” she said. “But we have to make sure the public transit stays public and suburbs are not excluded from that.”

The proposed bus route changes would have a negative effect on Rochester resident Marie Meza’s plans to go back to school, as she relies on the bus service for her job as a grant writer, she said after an Aug. 14 community session to gather feedback on the report.

She’ll likely have to move closer to the college she had planned to attend, Meza said.

“They need to talk more to the people instead of a consultant,” she added. “They should talk to the people who are vulnerable and need (bus) transportation. … We should have all the say.”

Juanita Ball of Rochester said she worries about the proposals that would require use of a smartphone to make certain connections to other services, like car sharing.

“A lot of us can’t afford to do that kind of thing,” she said.

EDITOR’S NOTE: For more information and to provide feedback about the Reimagine RTS plan, visit https://reimagine.myrts.com/transit-plan.