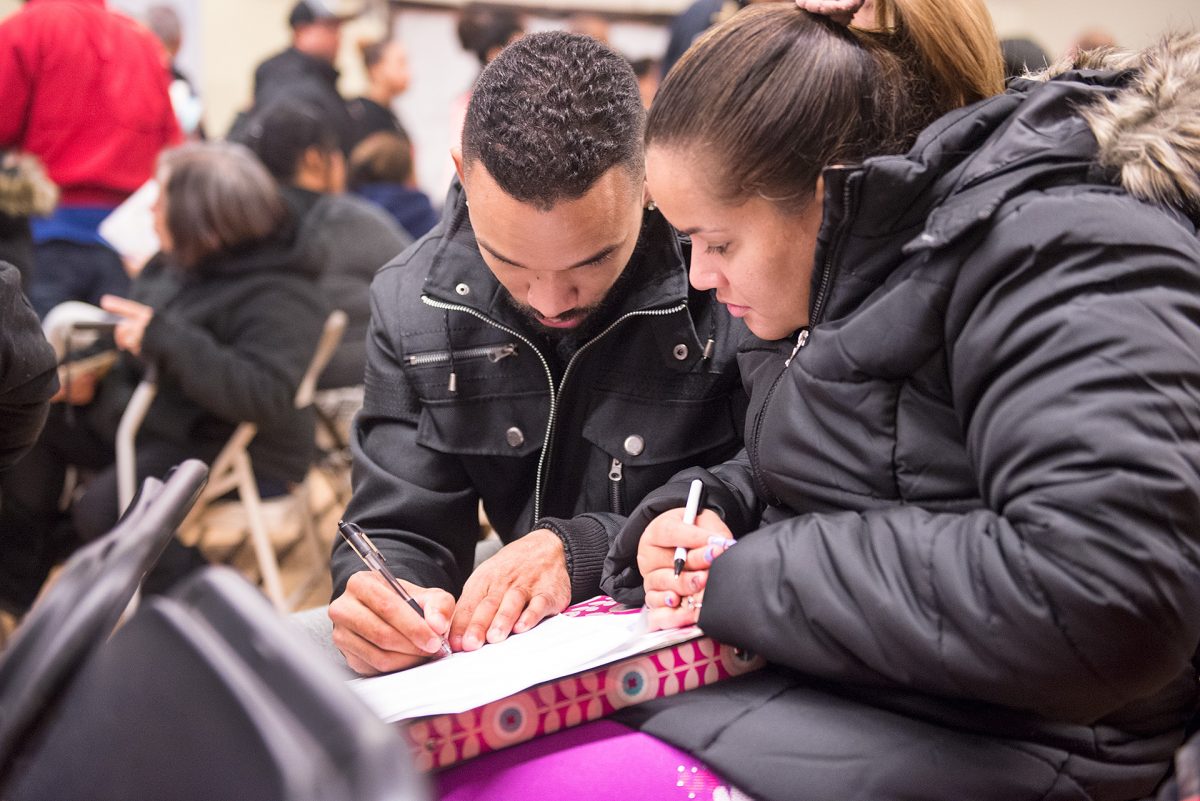 “The sound was horrible,” Berrios said. “It sounded like a monster. I can still hear the sound in my head, that is how horrible it was. I thought the house would fall in on itself.”

Berrios recounted her story to El Mensajero Católico Oct. 28 as she ate lunch with her daughters during the fifth-annual Latino Parent Conference at the David Gantt Recreation Center. Relatives had given Berrios the money she needed to bring her family to Rochester, she said, noting that she has friends who live in the area. Her 19-year-old daughter is due to have a baby Nov. 24, and they wanted her to be able to deliver in a safe place.

Prior to leaving Puerto Rico, she said her family had no access to water or food. Their flight was cancelled several times before they were able to arrive in Rochester on Oct. 16. At first, the family stayed in a shelter but now have an apartment, Berrios added. And her younger daughter, who is 15, is now enrolled at Joseph C. Wilson Magnet High School.

She has not made any decisions about returning to the island.

Berrios was among the nearly 200 participants at the Latino conference, many of whom are relatives or guardians of the more than 150 students from Puerto Rico who have enrolled in city schools following the hurricane, noted Superintendent Barbara Deane-Williams. The district also expects to hire needed bilingual staff and employees from Puerto Rico, she said.

In addition to a meal, the event offered guidance on navigating the district and information from community agencies. Keynote speaker Ida Peréz encouraged parents to remain active in their children’s education. Families also received free books, clothing and children’s coats.

“We recognize many of you have been impacted directly or indirectly by Hurricane Maria,” Deane-Williams said to the conference participants. “We want to say unequivocally you are welcome here.”

Last month, Maria Rodríguez welcomed her 12-year-old goddaughter, Yamilete González, to Rochester. Yamilete’s mother had asked Rodríguez to take the child in, as the family was concerned that classes in Puerto Rico may not resume on a regular basis for some time, Rodriguez explained. The only way her friend could reach her to make the request was through Facebook Messenger after traveling 45 minutes from Fajardo to Carolina for an Internet signal, she added.

“She’s a little girl and (her mother) didn’t want her missing school and going through all this,” with no power or other resources, Rodriguez said.

Thirteen-year-old Joealexis Davila said his family also lacked basic necessities on the island. He and his 9-year-old sister, Amanda, flew to Rochester Oct. 4 to live with their older sister, Nayrovis Davila. Their mother hopes to join them next month, he said.

“Conditions are difficult,” Joealexis said. “We couldn’t do anything. My mother decided we could longer stay there without food, water, with nothing. … It’s a disaster.”

To help the new arrivals learn what resources and services are available in their new home, more than a dozen community and government agencies have joined together to create a welcome center at 938 Clifford Ave. in Rochester. A reception was held for families on Nov. 9, explained Patricia Cruz-Irving, Ibero-American Action League’s director of development and communications.

“The idea is to offer one location that people can go to for their needs, questions, … so they don’t have to be going from one building to another,” added Cruz-Irving.

Hilda Rosario-Escher, Ibero’s executive director and CEO, announced the center’s opening during a press conference at Ibero’s Early Childhood Education Center on Oct. 16. Representatives from the City of Rochester, the American Red Cross’ Greater Rochester chapter and the city school district spoke about their programs to provide hurricane relief. The director of Rochester Housing Authority and Monroe County Executive Cheryl DiNolfo outlined services available to provide families with housing and other basic necessities.

After the press conference, Nicole Roque spoke about moving to Rochester three days before the hurricane hit at the urging of her mother, who remains on the island. She and her husband, Michael Lozano, have an 8-month-old baby and a 2-year-old child.

“I can’t imagine what my mother went through” during the hurricane, she said. “It makes me sad.”

She said Ibero and Catholic Family Center representatives helped her find a place to live after initially being in a shelter and have provided diapers for her babies as well as vouchers to obtain clothing for the family. Her goal now is to learn English and eventually return to her nursing studies.

“It’s difficult to move to a new place without knowing the language,” Roque said. “(But) I like it here and will probably stay.”