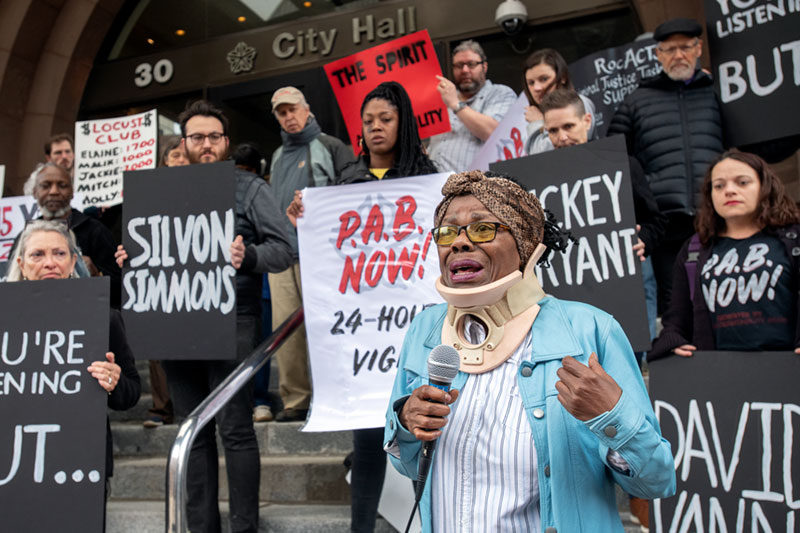 Phyllis Harmon speaks during a press conference and 24-hour vigil supporting an all civilian Police Accountability Board outside of Rochester City Hall May 2.

ROCHESTER — This fall, Rochester residents will be asked to vote on legislation that would establish an independent board to investigate cases of alleged police misconduct.

In a unanimous vote May 21, the Rochester City Council passed legislation to create a Police Accountability Board, which would be the first of its kind in the city’s history, since it would be civilian run, noted City Council President Loretta C. Scott.

“It’s been 50 years, but I believe we finally got it right,” Scott said May 21. “I am honored to vote to pass this legislation today.”

The legislation, called Local Law Police Accountability Board, must be approved by voters and will appear on the Nov. 5 ballot.

Also during the May 21 meeting, Scott said that the legislation passed by the city council includes all “five pillars” that a community coalition, the Police Accountability Board Alliance, had advocated for.

According to the five pillars, the Police Accountability Board would:

1. be an agency separate from the Rochester Police Department;

2. have power to independently investigate complaints of alleged police misconduct;

3. have power to subpoena evidence and witnesses;

4. have power to discipline members of the RPD; and

5. have power to review and evaluate RPD patterns and policies.

“The legislation is not a be-all and end-all solution, not exactly what we have been advocating for, and may not work in the same way that we imagined it would. However, the legislation is a good step toward substantive police accountability,” the Police Accountability Board Alliance said in a May 22 statement. “It is absolutely vital that the people of this city go out and vote in favor of the proposed PAB legislation on November 5.”

The alliance’s statement echoed Council Member Michael A. Patterson’s comments during the May 21 city council meeting.

“This is the beginning of the middle of the struggle, not the end,” he remarked.