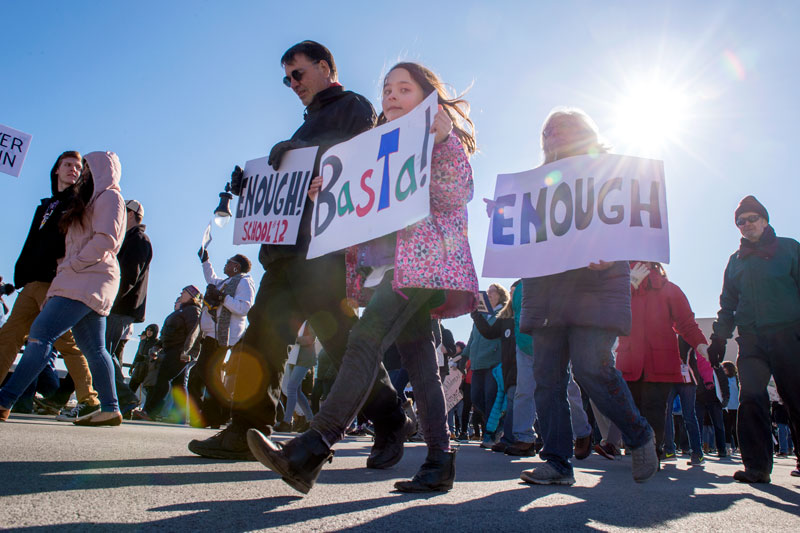 Elianna Renfrew (center) walks with Jim Renfrew (left) and Melissa Marquez (right) during the March for Our Lives protest March 24 in Rochester.

ROCHESTER — Was the March for Our Lives a moment in time or a movement in a new direction for the United States?

That was the question posed by the mother of Johnny “JR” Johnson, who was one of three young men murdered in front of the Boys & Girls Club of Rochester in August 2015. Lentory Johnson spoke at the end of a March 24 rally in that was held before 5,000 people marched through downtown Rochester as part of March for Our Lives, a national protest calling for gun control legislation as a means to end school violence.

PHOTO GALLERY: Thousands gather in Rochester for March for Our Lives protest

The Rochester march was one of 800 youth-led marches that took place across the country to coincide with the national rally that took place in Washington, D.C. The national protest rally was organized by students from Marjory Stoneman Douglas High School in Parkland, Fla., where a shooter killed 17 people Feb. 14.

“If it’s a moment, it’s all right because you have done something a lot of kids have not done,” Johnson said. “You have awareness. You care.”

Working to end violence, however, is something she has done every day since her son’s death, Johnson noted. It takes time, dedication and commitment, she said.

“When the time comes, don’t just get registered (to vote). Vote,” Johnson said. “Know how to do guerrilla warfare.”

She encouraged the entire community to be proud of the young people who came out to march for their lives.

“Support them. Hashtag: Theywanttolive,” Johnson said, referring to one of the Twitter handles used for the March for Our Lives.

Dylan Holcomb, a senior from Brighton High School who spent about a month organizing the Rochester march with School of the Arts students Grace Myers and Xzavien Jackson, said he was encouraged by the response from students representing school districts across the region. After the march, Holcomb said he was dedicating his continued efforts to the Black Lives Matter movement. The work of that movement’s leaders often goes ignored by the general public, he said, but police brutality is just as much of a public crisis as school shootings.

“I just hope people realize this is not a single march,” Holcomb said. “We’re trying to include all perspectives in the local community, such as the violence that the City of Rochester experiences. … Gun violence doesn’t discriminate.”

In addition to Johnson and Holcomb, speakers during the rally included Rochester Mayor Lovely Warren, members of Teen Empowerment, and students from School of the Arts, Geneseo, Brighton and SUNY Brockport.

SUNY Brockport sophomore Rebecca Oberstadt spoke of being a sophomore at Newtown High School in Connecticut in 2012 when the Sandy Hook Elementary School shooting happened and how it changed her hometown. She recalled how she hid under a counter in her biology classroom, heard police sirens and helicopters, and saw via her phone the news of the shooting at the elementary school.

“It wasn’t until 20 beautiful and innocent children and six brave educators lost heir lives in my hometown in Connecticut that I was confronted with the pain of a school shooting,” she said. “I watched my community break within a matter of seconds. Over the last five years, I have felt us all break time and time again with the news of another shooting and the lack of legislative action following more innocent lives taken.”

With every school shooting since Sandy Hook, the news vans and reporters, hashtags and discussions pop up about taking action to stop the next one but then another shooting happens, Oberstadt said.

“Why is our pain and grief only relevant when another shooting happens?” she said. “Why do we wait until more students and teachers lose their lives to remember the last time we said, ‘Enough is enough,’ and ‘We need to do something?’”

She is not ashamed to have her town’s name spoken in the same breath as Columbine, Virginia Tech and Parkland but is ashamed that little has changed since all of those shootings.

“I’m not ashamed of the voice that we here are amplifying,” she said. “I’m not ashamed (that) we as a generation are spearheading this movement and saying what too many adults are too afraid to say. … It is time for our legislators to resume their duty and protect our rights and our lives.”

Arming teachers and installing metal detectors and bulletproof glass is not the answer, but gun-control legislation banning such weapons as assault rifles is, Oberstadt said.

“We are here to make sure this does not end, to stand up for … the countless other children that will be killed if we do not take action,” she said. “The victims of these horrific shootings cannot fight for their lives anymore, but we can.”

Julio Morales said he can’t bear any more school shootings at the hands of people who have been able to purchase the military-style weapons used in most of the cases.

“It’s time for (legislation) to regulate these type of guns,” said Morales, who marched with Sandy Morales of Rochester and their 15-year-old daughter, Nadia. “Every time another shooting happens, it’s so sad. … It’s happening so often. It’s heartbreaking.”

Nadia said that at her school, Rochester’s School of the Arts, students not only encouraged participation in the march but have been registering eligible students to vote.

“We want more awareness and policy change (through) public presence and public outcry,” she added.

Teresa Garcia, a sophomore at Lansing High School in Tompkins County, said she was inspired by the thousands of people who marched across the country. She attended the march in Washington with a group of about 30 parishioners from St. Catherine of Siena Church in Ithaca.

“It was incredibly empowering,” she told El Mensajero Católico in an e-mail describing her participation in the national march. “Every speaker was under the age of 18, and every single one had hundreds of thousands of people cheering, laughing, crying, and clapping. The stories these youth told were unforgettable. From a girl threatened at gunpoint in her neighborhood, to a boy who lost his brother, his best friend, the speakers all shared different experiences, but they all delivered the exact same message: this has to stop, and the way that (it) is going to happen is with more gun control. … I will most certainly remain active in the movement. I have already written to my senators and representative, and will continue to do so until this issue is no longer existent.”