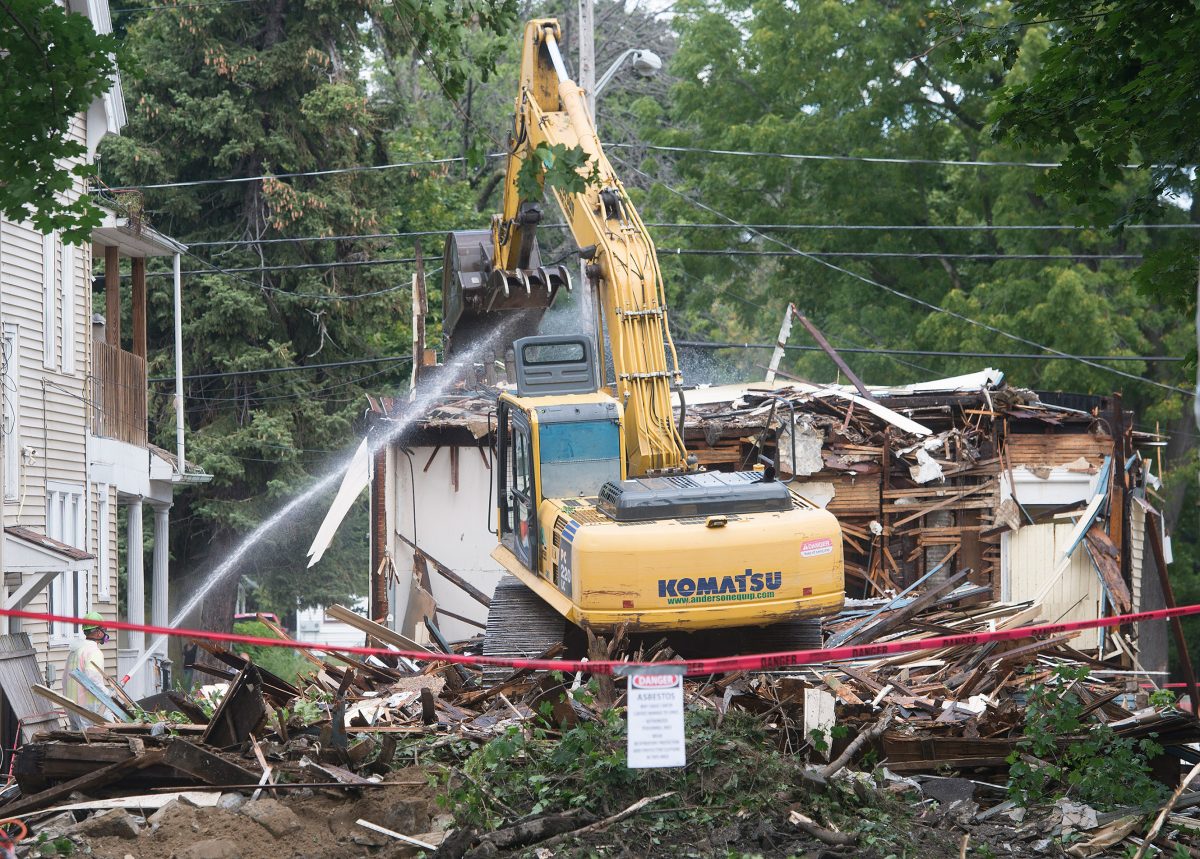 Crew work to bring down a house at 525 Clifford Ave. in the city of Rochester on Sept. 13. A 175 vacant properties throughout the city will be razed to improve the quality of life. El Mensajero Photo by John Haeger

ROCHESTER — The city has introduced a new program through which blighted properties around Rochester will be turned into vacant lots that can be redeveloped to help stabilize city neighborhoods and make them more secure.

Mayor Lovely Warren introduced the program Sept. 5 during a news conference in front of an Ames Street house that had deteriorated during six years of vacancy. She said that the city planned to demolish a total of 175 houses by the end of the fiscal year in June 2018.

“The houses on the demolition list are beyond repair, are unsafe and often contaminated with asbestos and lead,” Warren said. “They are a magnet for drug users and crimes.”

Some of the properties to be razed came under city control when the owners stop paying taxes, explained Johanna Santiago, the city’s manager of contract services who oversees that component of the program. Others were seized for becoming nuisances in their neighborhoods because they were vacant for long periods of time, Santiago said.

The demolition work is being completed by contractors that were hired following a request for proposals process, Santiago noted. Rochester City Council originally budgeted $1.45 million for the work, according to information at cityofrochester.gov, and Warren said an additional $1.2 million has been allocated for the project.

Once demolition work is complete, the city will work with local neighborhood associations, developers and such community agencies as Ibero-American Action League and PathStone Corp. to develop the vacant lots, Warren said.

“Neighbors get frustrated when see a house sitting for three, four, five years and nothing happens,” he said. “This (demolition program) is a good thing.”

In addition to demolishing vacant homes that are beyond repair, the program also will rehabilitate homes that “are not too far gone,” Warren said during the Sept. 5 news conference. The city plans to renovate five homes to sell to first-time homebuyers, she said.

“With a little TLC (tender loving care), these can be a great home for many of our citizens starting to live the American dream and own their own home,” Warren said.

The rehabilitation process begins with the Rochester Land Bank Corp., a separate city organization created in 2013, said Paul Scuderi, the organization’s executive director. Its operations are funded through a state grant program initiated by mortgage settlements with large banks after the national housing crisis, he said.

Since its inception, the Rochester Land Bank has received $5 million used to build six new homes, rehabilitate 86 houses and sell 16 blighted properties to developers or owner-occupants, according to information provided by city officials.

It then works with the Greater Rochester Housing Partnership to complete renovations that often include new roofs, windows and other mechanical work.

“It’s a nice start for these folks who’ve never owned a house,” Scuderi noted. “(The program) really has worked out well. Looking back over the statistics, it does a nice job of identifying people who are able to make good on their loans.”