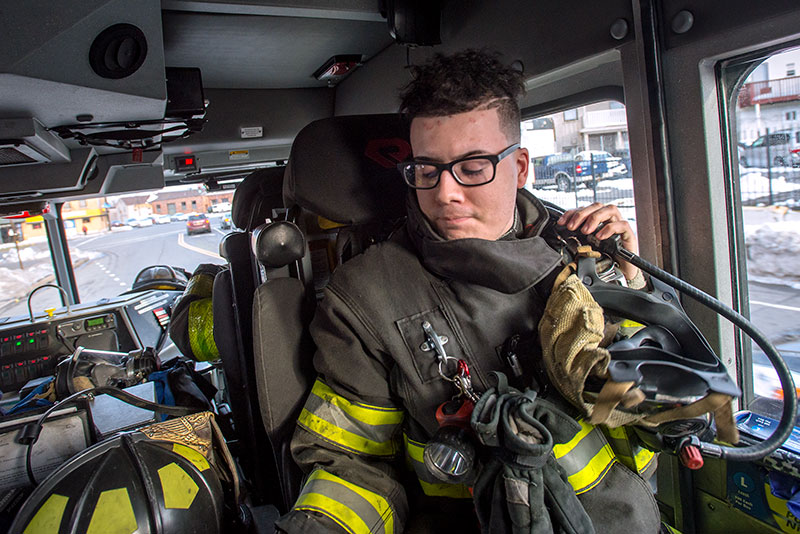 Rochester Fireman Jonathan Quinones of the Engine 5 Firehouse straps on his oxygen tank while en route to a call on Lake Ave in Rochester March 8.

ROCHESTER — Eddie Santiago had never considered becoming a firefighter until he worked as an intern with the Rochester Fire Department while at East High School.

He joined the department 23 years ago right after graduation and never looked back, said Santiago, president of the Rochester Fire Fighters Association Local No. 1071.

“I didn’t know anything about firefighting until I was exposed to it,” he said during a March 2 interview with El Mensajero Católico. “I can tell you right now, I don’t regret it one bit.”

To provide that kind of exposure and greater outreach to other Latinos and people of color regarding opportunities available across all law enforcement agencies is the goal of the newly formed coalition, Latino Advancement in Public Safety (LAPS).

The coalition of community leaders and Latino public safety officials kicked off in January with an inaugural meeting to gauge interest in its goal to boost diversity in the law enforcement ranks, explained City Councilwoman Jackie Ortiz.

During the initial gathering, Ortiz presented statistics she said illustrate the importance of the group’s efforts:

• Of the 478 members of the Rochester Fire Department, only 10.8 percent are Latinos and only one is a Latina, when 16 percent of city residents are Latino.

• Among the 748 staff members of the Rochester Police Department, Latinos represent 11.7 percent of staff members.

• Of the Monroe County Sheriff’s Department 270 officers, only 1.85 percent are Latino, even though Latinos make up 8.5 percent of the county population.

More than 100 people attended the Jan. 19 event at the Rochester Fire Union Hall on Hudson Avenue, and many signed up to assist with the two initial focus areas — recruitment and advocacy, she said.

Ortiz is spearheading the initiative with representatives from the fire department, the Rochester Police Department, the Monroe County Sheriff’s office, the New York State Police and several suburban police departments, including Gates.

The idea to develop a systematic approach to overcoming barriers to diversity began forming nearly a year ago, she said following a Feb. 9 planning meeting.

The diversity issue also had been discussed by members of La Cumbre, an ad hoc advocacy group, said Anthony Plonczynski, a member of the La Cumbre education committee.

“Latinos haven’t really organized” on law enforcement diversity, Plonczynski added. “It’s about time to come together and see it happen all over the county.”

At the city level, diversity has been rising slowly through concerted efforts by city officials, but more needs to be done to mirror the population, Ortiz said.

“Our long-term goal is to have Latino officers and firefighters in every town of Monroe County,” noted RPD Sgt. Agustin González.

Latinos offer a unique skill set that includes translation and cultural sensitivity that is valuable to police work, he said.

“If you don’t have any knowledge of anyone who is of Latino or African descent, it may make a difference in how you’re dealing with them,” he explained. “You may make a mistake not knowing those cultures. There could definitely be a misunderstanding. We want to avoid that.”

Thus far, the group has the support of the heads of police and fire departments from around the county who will be directing their staffs to get involved and assist LAPS, González said. They also will seek out assistance from area colleges, churches and community groups and agencies such as Ibero-American Action League and plan to take part in upcoming festivals and go out to any community event they’re invited to, he said.

“We’ll kind of be (engaging) in a full-court press,” Gonzalez said. “We want to be visible, known and approachable.”

Part of its outreach will need to include education on the exam process for law enforcement and offering preparation and guidance for the written and physical portions, said González and Santiago.

As president of the firefighters’ association, Santiago said that he is walking a fine line when it comes to this effort, because he doesn’t want to come across as biased toward Latinos. When his good friend Ortiz approached him about helping out with LAPS, though, he could not say no, he added.

“At the end of the day, I want to see the city succeed, and some serious dialogue needs to be had (about diversity),” he said. “The workforce should reflect the communities we serve in.”

Creating LAPS is a good start to having such dialogue, which also needs to include discussion about making exams available more frequently, he said. The firefighter exam is only offered once every three years.

“A lot of it (recruitment) is going to be education, letting Latinos know these jobs exist and how to apply for them,” González added. “There will also be some mentorship involved. … A bunch of things have to happen before you become a police officer. It may take nine to 12 months. You have to understand it’s not going to happen overnight.”

The process to become a police officer includes background checks and psychological evaluations to ensure officers have integrity and good moral character, he said.

“The most important thing is we bring in more Latinos to … more accurately reflect populations of towns and the city of Rochester,” Gonzalez said.