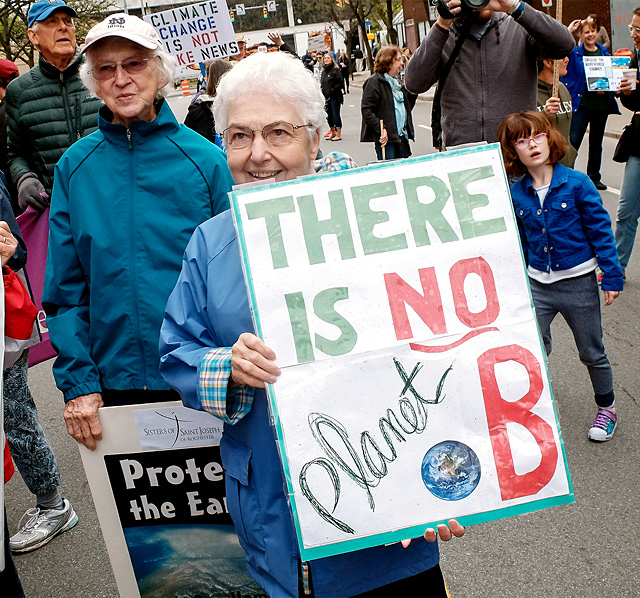 As thousands walked in climate marches across the country last month — including in downtown Rochester — to support policies to address climate change, the city of Rochester has been developing its own plan to reduce greenhouse emissions and become more energy efficient.

Hundreds of people participated in the April 29 march and rally from Rochester City Hall to Washington Square Park that was organized by the Rochester People’s Climate Coalition.

Linda Isaacson Fedele, a liaison with the coalition, said she hopes the city moves quickly to make its climate plan a reality.

"We’re happy they’re doing something, although we feel it doesn’t go far enough," she said.

People take to the streets of Rochester as they take part in the climate march on April 29.

The goal of the city’s Climate Action Plan, which city officials expect to begin implementing this year, is to reduce greenhouse gases by 40 percent by 2030, explained Anne Spaulding, energy and sustainability manager for the city’s Division of Environmental Quality.

The city first began making changes in 2007, however, when it focused on reducing emissions from its facilities and operations and adopted a municipal climate plan in 2013, she said. Changes have included putting in solar panels in city buildings, installing rain gardens and green roofs where possible, and replacing standard light bulbs with LEDs in city properties and streetlights, according to the city’s Climate Action Plan proposal at http://bit.ly/2qJqpnx.

"Then, we started working outwards and what we can do to address climate in the entire community," Spaulding said. "This is not just a single-entity issue. It’s a global issue, a regional issue."

To create a community plan, the city received a $100,000 grant in 2014 through the New York State Energy Research and Development Authority (NYSERDA), she explained. Officials chose four focus areas: energy use and supply, transportation, waste management, clean water and land use, according to the proposal.

The initial steps in creating a plan also included taking an inventory of greenhouse gas emissions to develop a baseline from which to measure progress, Spaulding said.

City staff then measured the use of gas and electricity, road and plane travel, methane emissions from landfill waste, and emissions from community wastewater and septic systems. It was determined that Rochester’s total emissions in 2014 were 1.8 million Metric Tonne Carbon Dioxide Equivalent (MTCO2), which is the equivalent of 380,000 passenger vehicles being driven in any given year or the energy used by 190,000 homes for one year, according to the climate plan.

"The city can’t really do it on its own," Spaulding noted.

Following an open house last November at City Hall to inform residents about the plan, Spaulding’s staff and city officials began incorporating some of the feedback into the plan and hope to moved forward soon as other cities have done, including Minneapolis and Cincinnati.

"One of the biggest things that we can do is energy efficiency," she added. "Both residents and businesses and institutions can upgrade facilities with LED lighting and efficient heating. Because if you don’t use energy in the first place, that’s the best way to reduce emissions."

Finding renewable energy alternatives is more of a financial stretch for a municipality, city officials say, but Abigail McHugh-Grifa said other cities are moving in that direction. A city resident for the last nine years, McHugh-Grifa was invited by Spaulding to serve on the climate advisory committee because of her interest in addressing climate change.

McHugh-Grifa cited the Sierra Club’s "Mayor Ready for 100 % Clean Energy" campaign to transition U.S. cities into only using such clean and renewable energy sources as wind and solar, according to information at http://bit.ly/2oxWlyy. Many of the cities participating in the campaign are in California but also include municipalities in Florida, Michigan, Vermont and New Jersey.

She said a Stanford University professor has even come up with individual approaches for every state to only use clean energy relying on wind, water and solar (http://bit.ly/1hzPA5E).

"It’s totally possible using technology that exists now," noted McHugh-Grifa, a teacher at the Eastman Community Music School who accepted Spaulding’s invitation to serve on the advisory committee because of her children.

"When I had kids, my sense of urgency surrounding these issues ramped up considerably," she added. "I have to protect them. That’s my job. To me, clearly this issue threatens their future the most."

One of parts of the city’s plan that she is most excited about is Community Choice Aggregation. The municipal energy procurement model would make the city the default supplier of electricity for homes and small businesses, according to the proposal. By pooling demand, communities are able to choose cleaner energy sources and negotiate lower rates with private suppliers.

"That (provision) could make a huge difference … and is a great way to make renewable energy more affordable," McHugh-Grifa said.

Encouraging residents to choose renewable energy for their own properties, Spaulding noted, is difficult because of the initial investment involved. She encourages others to put solar panels on their roofs if feasible, as she did, she added.

"Depending on the time of year, they can generate 80 percent of the energy for my particular house," Spaulding said of solar panels. "But I know not everyone can do that, as they may not have a sun-facing roof or the finances."

Other steps residents can take instead are installing LED lights in their homes, which can save electricity use by 75 percent, she said. Rochester General Hospital recently undertook a project to replace all of its outdoor lighting with LED lights, she added.

Shandan Jones, a Vertus High School junior who spoke during the April 29 climate rally, said transportation is another key issue.

"Our method of transportation matters," said Shandan, who is part of an organization called Dream Bikes. "We need to walk, bike, take public transportation and make the best choice for our planet."