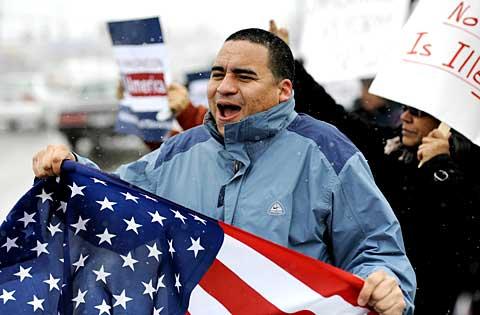 Some of her family members are undocumented immigrants, said Jaramillo of Guilford, N.Y., who traveled across the state last month in a caravan that was part of the "New York Road Trip for our Future." The event — aimed at calling attention to the need for comprehensive U.S. immigration reform — was organized by the national Reform Immigration for America campaign, the New York Immigration Coalition and various New York activist groups.

"Deportation is not an option for us," Jaramillo told the Catholic Courier during the event. "We can’t lose people close to us. And my story is one of millions," added Jaramillo, who also is the grassroots organizer for the Reform Immigration for America campaign.

On Feb. 17 Jaramillo and 30 other local immigrant advocates and caravan members stood in bitter cold winds and temperatures at two Monroe County rallies to demand immigration reform. The rallies were held at the offices of Congressman Eric Massa in Pittsford and Congressman Chris Lee in Greece.

Also that day, more than 80 people rallied at the caravan’s stop at St. John’s Episcopal Church in Sodus, which included statements in support of reform not only from workers and farmers but also from a representative of the Wayne County sheriff’s department and staff members from Catholic Charities of Wayne County, said rally participant Dr. John "Lory" Ghertner. The caravan’s last area stop on Feb. 17 was the Federal Immigration Detention Center in Batavia.

The Batavia stop was an especially important one to raise awareness that such a detention center operates in Western New York, said Gabriela Villareal, policy coordinator for the New York Immigration Coalition, speaking from the final caravan stop Feb. 19 at the Arab Muslim American Federation in Brooklyn.

"It’s where hundreds of immigrants and asylum speakers are detained," she added about the Batavia center. "It’s part of a federal detention center that continues to operate without any government accountability or transparency."

During the caravan’s Feb. 17 stops at Massa and Lee’s offices Gary Pudup, director of the Genesee Valley Chapter of the New York Civil Liberties Union, presented a letter from the organization to the congressmen’s representatives. Pudup said about 12 million to 15 million undocumented immigrants currently live in the United States.

"Congress must take action to adopt practical solutions to fix our nation’s broken immigration system and uphold the values that all Americans hold dear," he stated.

Although Massa and Lee were not on hand at the Monroe County rallies, their staff members met with advocates to talk about the possibility of reform legislation.

Jared Smith, Massa’s communications director, said that most of the congressman’s energies right now are focused on economic stimulus and health care, although Massa wants to see immigration legislation proposed.

"We’ve heard from constituents; it’s an emotional and difficult issue," Smith told the Catholic Courier. "We’re united that something needs to be done. What that is? We’re not at that point yet."

Staff members at Lee’s office referred questions to the congressman’s communications director, Andrea Bozek, who provided the Catholic Courier with a Feb. 18 statement from Lee.

"I appreciate the group taking the time to discuss their concerns with my office," Lee said in his statement. "I believe that our immigration policy should be based on the rule of law and those who are in our country illegally should not be rewarded with taxpayers funded benefits. I look forward to working to strengthen and improve our immigration and border policies to uphold the rule of law and protect Western New York’s economy and agricultural sector."

Ami Kadar of Albion’s Centro Independiente de Trabajadores Agricolas (CITA) said that if comprehensive immigration reform included an option for immigrant workers to become legal residents or citizens, those workers would pay additional taxes that would help the country’s economic recovery. Kadar also was part of training sessions held in Washington and New York where the caravan idea developed.

"The state of affairs as it is now is untenable," she added. "We can’t leave it (U.S. immigration laws) as it is."

Saul Linares of Hempstead, N.Y., said that more than 100 people met up with the caravan during its first two stops in Carmel and Syracuse on Feb. 15 and 16, respectively. The caravan took off from New York City on Feb. 15.

As he held up an American flag in front of Massa’s office, Linares noted that the groups that have joined the caravan organizers’ efforts have included religious leaders as well as migrant workers.

"This is the time to send a strong message with unity to our representatives … for immigration reform," said Linares, a native of El Salvador.

With the caravan movement complete, attention will now turn to a national mobilization planned for March 21 in Washington D.C., said Villareal and Kadar. The Reform Immigration for America campaign is leading the effort and hopes that more than 100,000 supporters will participate.

"New York state has a history of being a gateway for immigrants around the world," Villareal noted. "New York continues to be a home for new Americans. We think New York should strongly represent at this (national) event."

The New York advocacy groups also will look to one of their senators, U.S. Sen. Charles Schumer, who is chairman of the Senate subcommittee on immigration, border security and citizenship, to present reform legislation at some time this year, Villareal added. According to www.immigrationreport.org, Sen. Schumer has been working behind this scenes in recent months to garner bipartisan support for a bill.

"His constituents … really want him to use his political leadership to get this done," Villareal said.

Peter Mares, an outreach worker for Catholic Charities of Wayne County and manager of La Casa — a temporary-housing program for migrants in Sodus — said the caravan campaign served as an important method to highlight that the U.S. immigration system needs to change as soon as possible.

"Even President (Barack) Obama said the system is broken, so why are we using it?" Mares asked. "What happened to all the (campaign) promises to fix it?"

EDITOR’S NOTE: For more information or to arrange to be part of a local delegation planning to participate in the March 21 rally in Washington, D.C., call Ami Kadar at 585-615-9860.