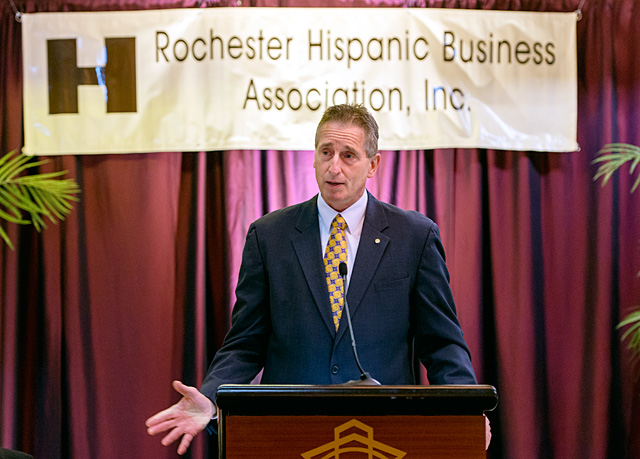 ROCHESTER — This year’s Hispanic Business Person of the Year found success by turning any "no" she encountered into a "yes."

Librada "Zury" Brown received her award during the 26th-annual Rochester Hispanic Business Association’s luncheon gala. She is the owner of El Pilón Criollo and became the first Hispanic woman to build a restaurant from the ground up on North Clinton Avenue, said Lisa Martínez-DeVinney, RHBA’s treasurer.

"Fear can sometimes hold you back," Brown said. "And the answer to many of our questions and needs is a ‘no.’ You have to make that ‘no’ into a ‘yes.’ I guess that’s what I do."

The community can support small business owners like Brown in a very simple way, said Robert Duffy, president of the Rochester Business Alliance, who served as keynote speaker during the luncheon.

"The best way to help business is by spending money and patronizing them," he said. "We need to support them, not just with words but with dollars."

And small businesses are at the core of the economy, spending countless hours trying to figure out how to cover their payroll costs and meet the many regulations they must adhere to, Duffy added.

"Thank you for investing your money and your time," he said to the business owners. "Hopefully, we’ll be doing some things … that will make your jobs a little easier."

Rochester is in the midst of great change and opportunity, Duffy said, with the state’s designation of the area as a photonics hub having the potential to add 5,000 to 7,000 news jobs. Such an influx affects everybody from restaurants to shops and other related companies, he added.

The region also is competing for another economic development grant from the state that could mean an additional $500 million investment in such areas as agriculture, technology and manufacturing.

"We need more Zurys in our city"

"Think about it, we could see $1 billion in a year," Duffy remarked. "We won’t see that kind of investment in a long, long time."

These opportunities also provide a challenge for the area in developing a workforce to meet the demands of these investments, he noted.

"Young people who are willing to work, who want to learn, have the opportunity to make a great living," he said. "If we can’t provide the workforce, (those) new companies are going to go elsewhere."

He cited the example of a local company he recently met with, Thermo Fisher Scientific in Penfield, which was forced to hire workers from Monterey, Mexico, because of a local shortage of manufacturing help.

Improving education so that more young people are career or college ready helps the entire community, he said, and helps address the poverty crisis the community must address.

"We can’t miss this opportunity for the future," he said. "Everybody will benefit."

Increasing access to such opportunities for RHBA members also is the goal of Vilma Burgos Torres, the second woman to be named RHBA’s chairperson.

She said that her goal also is to continue the work of her predecessors at the RHBA and "find better and more benefits for our members and our community."

Burgos Torres also announced the creation of a new business section that will appear in El Mensajero Católico to provide additional coverage on different aspects of economic development in the Hispanic community. The new section will appear under the banner "El Mural de la Comunidad" and was developed in collaboration with La Cumbre, she said. RHBA, Ibero-American Action League and the Rochester Latino Rotary Club also are partners in this endeavor.

"Get involved," Burgos Torres urged the business leaders in the audience.