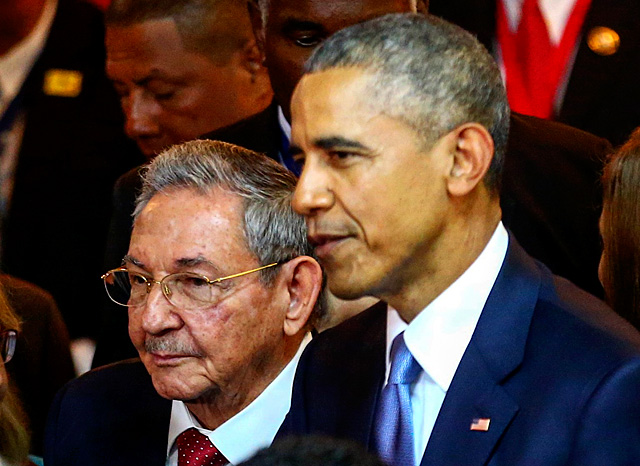 Cuba's President Raul Castro stands with U.S. President Barack Obama before the inauguration of the seventh Summit of the Americas in Panama City April 10. Obama and Castro, who shook hands at the summit, seek to restore ties between the Cold War foes. (CNS photo/Peru Presidency, handout via Reuters) See PANAMA-CUBA April 13, 2015.

Reactions are mixed among area natives of Cuba as to whether the lifting of certain U.S. economic sanctions will benefit the people of their island homeland.

Since President John F. Kennedy declared it in 1962, United States has maintained a comprehensive economic embargo on Cuban trade, according to the U.S. Department of State (see http://bit.ly/1Mun8OD).

Last month, however, President Barack Obama announced that the United States will permit the import of some Cuban products — including cigars and rum — and allow collaboration with Cubans on scientific research, according to information offered by the Department of the Treasury at http://bit.ly/2dYD7gg.

The changes to the U.S.-Cuba policy also include authorizing certain transactions related to joint medical research and pharmaceuticals originating in Cuba; expanding existing authorizations for grants and humanitarian-related services; and increasing people-to-people contact in Cuba through authorized travel and commerce, according to information at http://bit.ly/2dYD7gg.

Yet to truly improve the economic reality of the Cuban people, local observers said the next president should press more than Obama did to loosen the grip of the communist Castro regime.

"It is essential … to press the Cuban government for humanitarian reform in exchange for increased trade opportunities," said Juan Rodríguez, a Monroe Community College professor. "Obama’s Cuba policy should have been enacted decades ago. The embargo has been Castro’s crutch, his excuse, his weapon. And the victims have been the Cubans on the island."

For Luis Martínez, a local business consultant who as a child moved to Miami from Cuba with his parents, the changes represent a failure on the part of Obama to negotiate terms that would benefit the Cuban people.

"The people living there are subsisting on misery and poverty and rationed food," he said.

Martínez said the U.S. embargo did not stop Cuba from trading with the rest of the globe, yet the island lacks private enterprise.

"If you go to Havana, can you find Chinese or French restaurants?" he said. "Where are all the Fiats, Hondas, Toyotas? (Cubans) are so poor because of communism, not because of the (U.S.) embargo."

Until the Castro regime allows for private enterprise on the island, residents’ economic futures remain in the hands of the government, he said. However, he said changes in U.S. policy may help in terms of attracting tourists. He suggested that anyone traveling to Cuba pack such extra items as adhesive bandages, soap, pens and tape to dole out to the local Cubans they encounter. He said those people in turn would use the items to barter and care for their families’ needs. He did not recommend staying at chain hotels, whose profits are shared with a government that still dictates where people can work or study, he added.

Elena Goldfeder, a playwright and Spanish professor who also is a former director of La Casa Hispana at Nazareth College, acknowledged that challenges remain for the Cuban people as their government continues to claim partial ownership of all properties owned by outside entities. But Obama’s actions provide an important step not only for normalizing relations, but also setting the stage for additional economic negotiations, she noted.

"A ‘capitalist’ socialism will prevail with Raúl (Castro) continuing the policies of the revolution, but with more opportunities for entrepreneurship among the population and a more "open" philosophy as to outside information that comes in," Goldfeder said. "I know that the people of Cuba want the U.S. there."

Goldfeder said her cousin, who still lives on the island, also hopes that the next president will continue to pressure the Castros to permit some private business.

Martínez said allowing private enterprise is how China evolved from a communist nation into an economic powerhouse even as it remains under one-party rule.

"That is why there are billionaires in China, but not in Cuba," he said.

Unfettered capitalism, however, is not a "magic bullet," noted Rodríguez, who moved to Rochester from Miami a decade ago.

"Many have been lifted out of poverty," he said of people in China. "And, by and large, the Chinese people are better off today than they were under the beloved Chairman Mao. … But, capitalism has left many worse off. Many have been left behind. Many have been crushed. If capitalism is not regulated and applied with humanity at heart, it can be a destructive force, which only benefits the few. In our own good old (United States), we are drifting, flirting with such possibilities."