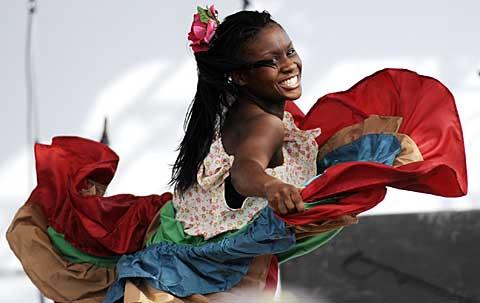 ROCHESTER — Organizers of the 41st-annual Puerto Rican Festival have been working throughout the year to promote a positive image and hope festivalgoers will respond in kind.

The three-day festival will again take place at Frontier Field’s VIP parking lot beginning July 30. This year’s theme is "Celebrating our Generations," with musical artists that will span different genres from folkloric bomba and plena to bachata.

After years of negative publicity due to the actions of festival attendees who have engaged in fights and other incidents after the event, the festival’s board of directors has taken a proactive approach. Since last year’s festival the board has met every few months with Rochester police officials to talk about preventive measures and will reach out to local media outlets to ask them to cover the festival as a whole and not just focus on the actions of a few.

"We want to make people aware that these things are not going to be tolerated," said Orlando Ortiz, festival president. "At the end of the day, we’re all the same community. We need to help each other out."

As part of its efforts to encourage the well-being of the community, the festival partnered with Lifetime Care, one of the festival’s sponsors, which will offer a health fair on July 31. That event will include on-site health screenings and workshops on conditions that affect Latinos such as diabetes and high-blood pressure, said Alfredo González, Lifetime’s cultural-diversity manager. Earlier this year, organizers of a race formerly held in the 1990s approached Ortiz to bring back the event as a 5K run-walk as another way for the community to undertake healthy activities. The organizers were given the green light, said Dan "Tito" Antonetty.

"We want to promote health, that’s the main thing," said Antonetty, who is coordinating the race with Al Burgos, owner of Burgos Income Tax Services. "We have so many problems with health, such as diabetes. If I can just get somebody who’s not doing anything to walk out there the day of the race … that’s something positive."

The race will begin at 9 a.m. in front of the stadium on Plymouth Avenue and continue through surrounding neighborhoods to end back on Plymouth. Proceeds from the race will benefit the Latino Rotary of Rochester’s literacy programs.

"Again, the intent is to draw a different pool of people and add to the whole weekend," Ortiz added.

Antonetty said the race will be completed in time for the start of the Puerto Rican parade, which will begin at 11 a.m. at Liberty Pole Way on East Main Street and end at the festival site.

Ortiz noted that the festival board also hosted events throughout the year as a means to create a yearlong association with the festival, not just see it as a one-time summer event. Those events have included dances at Christmas time and a wine pairing featuring local Latino restaurants.

"That way, people won’t hesitate to come to the festival," Ortiz said. "They’ll understand that the event itself is an organized, professional, family-oriented event."

To cater more to families, the board also decided to expand the children’s area at the festival. Eventually, Ortiz said that he would like to offer carnival rides as did festivals of the past.

"That’s our long-term vision," he said.