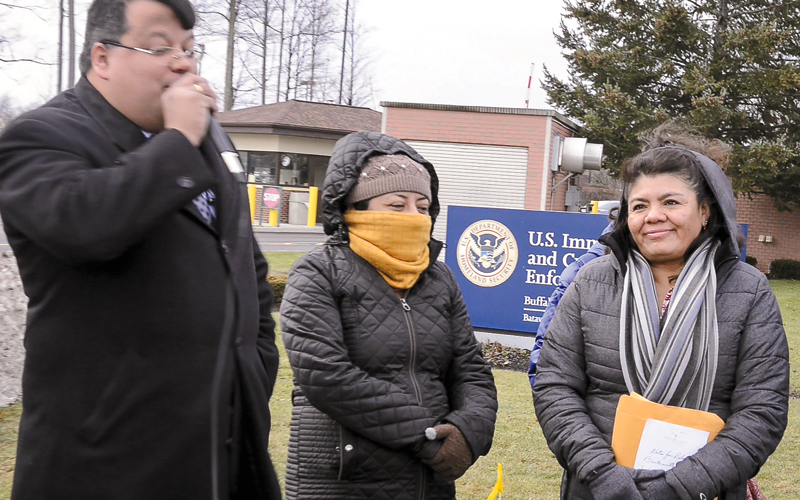 More than 20 protesters seeking an end to the deportation of immigrants braved a fierce, cold wind last month to rally in front of the Buffalo Federal Detention Center in Batavia in support of a local woman.

Dolores Bustamante, who lives in Wayne County and has been in this country since 2005, had a Dec. 19 trial date in the immigration court at the detention center. The trial was in regard to a 2014 incident in which Bustamante had been a passenger in a carstopped by a state trooper for a traffic violation. She was subsequently turned over to immigration authorities, according to a press release from the Workers’ Justice Center of Central New York, the Greater Rochester Coalition for Immigration Justice and theWorker Justice Center of New York.

Bustamante’s attorney, José Peréz, said he argued in immigration court Dec. 19 that the trooper’s action was a “prejudicial and racist detention.”

Peréz’s motion to dismiss Bustamante’s case on the basis that her detention violated her constitutional rights was not heard because her previous attorney had admitted that she was in this country illegally, he said.

The judge ultimately decided to continue Bustamante’s trial to May 8 because the court interpreter was ill, and the interpreter could not speak loudly enough during the proceeding to be heard by the judge or Bustamante, he added.

Peréz said he plans to file an application for asylum on Bustamante’s behalf based on threats of domestic violence and gang activity in her hometown of Morelos, Mexico. Her son was killed in a gang shooting in October, and Peréz said she was not able to returnto Mexico because of her ongoing immigration court proceedings, Peréz said.