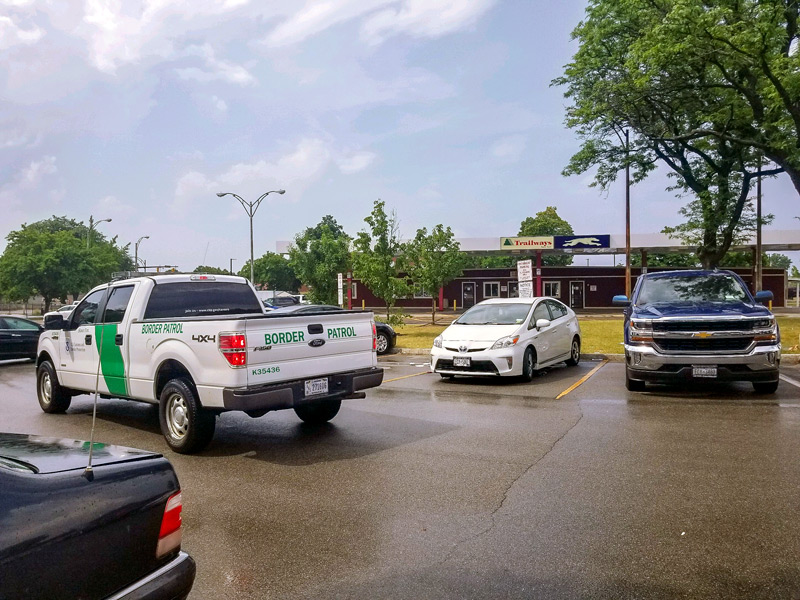 HENRIETTA — The future remains uncertain for a Mexican couple at the center of local protests against U.S. Custom and Border Protection officers boarding buses and interrogating passengers.

José and Teresa who asked that their last name not be used, are from Michoacan and now live in Newburgh, N.Y. José said he and his wife were traveling on a Greyhound bus from Newburgh to Chicago in January when their bus stopped at the New York Trailways station on Cumberland Street in Rochester to pick up additional passengers.

José said CBP agents boarded the bus and asked about their citizenship, and he told the agents that he and his wife were from Mexico and had their passports. The couple was then removed from the bus, taken to the CBP station on Pattonwood Drive and transferred to the Buffalo Federal Detention Center in Batavia, where they were held for two months, José said.

Teresa said family members had warned them to be careful before the fateful bus trip. But they had felt assured all would go smoothly, as had been the case any other time they had made the trip, she said.

The couple was back in the Rochester area on May 16 for what they thought was a hearing in their case. Unbeknownst to them, a change of venue had been approved for the case to be heard in New York City, closer to where they live, instead of Buffalo. No one had communicated the information to the couple, who are both 65 years old, explained Paul Flansburg, a volunteer with the Rochester Rapid Response Network (RRRN) who hosted the couple’s stay in Rochester in May.

Since Greyhound buses travel through Trailways stations, RRRN members took part in a March 22 protest and a July 5 prayer vigil at Rochester’s Trailways station to support the American Civil Liberties Union’s call for bus companies to protect their passengers by ceasing cooperation with CBP officers. The protesters referenced a letter the ACLU sent on behalf of its affiliates in California, Washington, Vermont, New York, New Hampshire, Michigan, Florida, Maine, Texas and Arizona to national representatives of Greyhound Lines. The letter states that the company’s practice of permitting CBP agents to board its buses to inquire about passengers’ citizenship and immigration status has led to passenger arrests.

In a June 7 e-mail to El Mensajero Católico, Greyhound spokesperson Crystal Booker said that the company has continued conversations with Border Patrol that began after the initial protests to determine if there is anything that can be done.

“We have also been in contact with the ACLU for the past few months in order to work towards a solution,” Booker added. “While we are required to comply with the law by allowing Border Patrol agents to board our buses when they ask to do so, we do not support or coordinate these searches, nor are we happy about them.”

Greyhound is a private company caught in the middle of an issue beyond its control, she said.

“Our drivers face arrest and fines for obstructing these agents, and we would not want to put their safety, or the safety of our passengers, at risk by attempting to physically stop a federal agent from boarding,” Booker stated.

Anne Noonan, a spokeswoman for New York Trailways, said that the company supports a policy statement from the American Bus Association on this issue.

According to the policy statement, the association “will not ask our drivers to resist warrantless vehicle searches that are authorized by federal statute. Intercity bus drivers do not have the legal training or background to determine when a warrant might or might not be required, or whether the officer has probable cause or reasonable suspicion to enter the vehicle. Our drivers’ primary obligation is to ensure that all passengers are transported safely and efficiently to their destinations. Individual passengers, of course, retain their rights to resist questioning or requests for documents by CBP officers under the Fourth Amendment and laws of the United States.”

Sara Curtis with the Worker Justice Center in Rochester said immigration advocates are remaining vigilant and are still in discussions with the two bus companies regarding the situation. She noted that the companies are not legally required to comply with what she called racial profiling tactics. She also said that the RRRN members are creating a database of incidences in which officers board buses and detain passengers to determine patterns that they can use to schedule volunteers to serve as advocates for anyone being questioned, Curtis added.

RRRN members also plan to present the data to city officials, since the bus station is located in Rochester, which is a “sanctuary city” for immigrants, Curtis said.

Meanwhile, José and Teresa are awaiting their next court date on Sept. 25. They have no idea what will happen to them after living in the New York City area for more than two decades. José has worked various jobs but had stopped working recently because of his diabetes. Teresa was still working as a maid at a hotel but was told that she could not work while the case is pending, she said.

“I don’t want anyone else to go through what we have,” she said. “The laws must be fixed, look for another solution. … We are not bad people. What wrong have we done?”