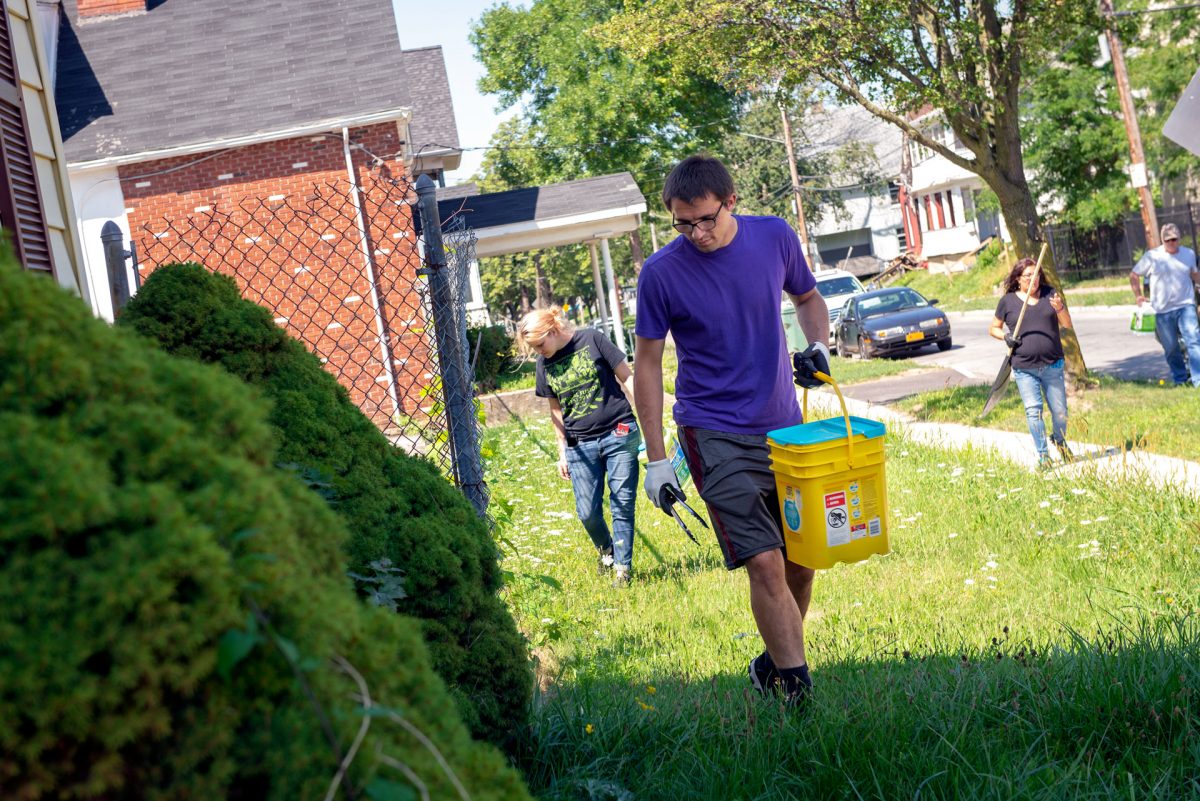 Jason Perrone searches for needles outside of a vacant home on Berlin St. in Rochester.

ROCHESTER — Heroin users have trespassed through Laurie Bogmis’ property on a street off North Clinton Avenue near St. Michael Church for their illicit activity.

“Sometimes, I find needles in my back yard, and I see people freely walking through my driveway to the back yard (who go) sit at my picnic table and shoot up,” she said.

Other times, they stop in front of her house just after getting their drugs because they are so anxious to use them, Bogmis told the Catholic Courier Aug. 20.

“I walk right up to them and ask them not to do that in front of my house,” she added. “The majority of the time, they respect my request. But if I’m not here, it’s a different story. Thank God my children are grown.”

Bogmis, who has lived in her house 26 years, said she supports the efforts by Project CLEAN (Community, Law Enforcement and Assistance Network) to address the problem for residents and businesses. The project, which is a partnership of the Rochester Police Department, the Ibero-American Development Corp.’s Project HOPE and Rochester Institute of Technology’s Center for Public Safety Initiatives, is in the first phase of collecting data on opioid overdoses, vacant properties and calls for service, said steering committee members. The three-year project is being funded by a nearly $1 million grant from the U.S. Department of Justice, said Kristen Cushman-Smith, Project CLEAN coordinator.

Project CLEAN is an outgrowth of Project HOPE’s work over the last several years to improve the quality of life for northeast Rochester residents, said Miguel Meléndez, Project HOPE coordinator and a member of the Project CLEAN steering committee. City and Monroe County law enforcement departments, community groups and agencies are also part of the committee, he added.

“The residents are fed up, frustrated and struggling to deal with the problem that has become progressively worse over time,” he said.

Part of the steering committee’s data collection revolves around gathering input from community organizations, treatment providers, residents and businesses to develop strategies to purge the area of its heroin crisis, she said.

“Project CLEAN is an important part of the solution (to) the problem,” said Roberto Burgos, who owns a multi-use building next door to the Father Tracy Health & Wellness Center at 821 N. Clinton Ave., which provides services to anyone who walks in its doors, including referrals to treatment clinics for substance users.

“I want my property to be a safe and clean and welcoming place for tenants, customers and visitors,” Burgos said. “Having an open-air drug market where outsiders … come in daily to buy, sell and use illegal drugs has a negative impact to the everyday quality of life.”

The RPD’s Clinton Section that patrols the North Clinton area has been working with the Project CLEAN team on developing its initial steps to respond to the heroin crisis, which will include deploying random foot patrols in a targeted area near North Clinton and Clifford avenues, said Captain Jeff Koehne.

“We hope that the additional presence and the close interactions between police and citizens/businesses that foot patrols provide will produce positive results,” Koehne said in an Aug. 21 e-mail to the Catholic Courier. “We are optimistic about making a difference. While the opioid crisis isn’t confined to one area in our county, there’s no doubt that the high concentration of activity in the North Clinton Avenue neighborhood requires our diligent effort to bring some relief to all of those affected in the area.”

Janelle Duda-Banwar from RIT said heroin has been sold in the area since the late 1960s but grew rampant in the 1970s, with increased use in the Puerto Rican community in the area because it was being trafficked through the island. Currently, about 70 percent of users who overdose from opioids are white men who take advantage of the neighborhood’s proximity to several expressways and the Inner Loop, Meléndez and Duda-Banwar said. Data has shown that users have driven from as far as four hours away to buy drugs in the area, said Cushman-Smith.

The increased use has led to fatal overdoses, which have multiplied from 11 in 2011 to 220 in 2017 in Monroe County, Duda-Banwar said. Increasingly, users are shooting up in the open — a dramatic shift noticed by federal officials when they came to visit as part of the grant, Meléndez added, noting that the officials said Rochester had one of the worst problems they had witnessed.

“That is the reality we are (facing),” he remarked.

Several factors have created conditions for rampant use in the North Clinton Avenue corridor, said Cushman-Smith. Those factors include a concentration of vacant land and lots that offer safe harbors for users, a loss of residents to act as neighborhood guardians due to those vacancies and Rochester’s well-known reputation as a drug market, she added.

Steps already taken by city officials to beautify the area are helping curb use, noted Bogmis, such as removing shrubbery that can hide drug use, installing fences to keep users from trespassing and cleaning up vacant lots. Speed bumps were installed on Scrantom Street, Meléndez said, since some drug users were speeding through neighborhoods once they secured their drugs.

Bogmis said she has hope that Project CLEAN will be successful.

“We are getting there,” she added. “The more people willing to participate and come up with solutions to the problems rather than staying behind closed doors and hoping problem goes away … that has all helped.”