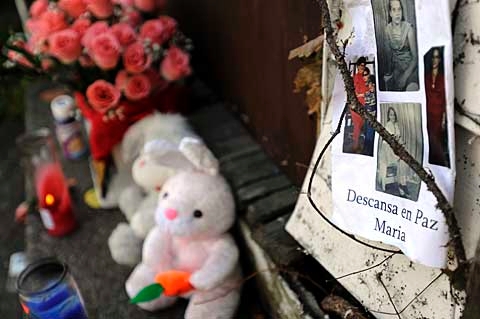 That’s because the native of Humacao, Puerto Rico, spent the later years of her life wandering along North Clinton Avenue in search of her next fix. She slept in an abandoned house on one of its corners.

Viera was a heroin addict whose life was cut tragically short when she died Sept. 2 at the age of 53 while in custody at Monroe County Jail following an arrest for criminal possession of drugs. The Monroe County Medical Examiner’s office has yet to release autopsy results, according to her daughter, Sandra Martínez-Viera.

Those are not the memories that her daughter will carry with her, however. She remembers a mother who was kind and loving and full of life. Viera enjoyed being the life of the party, said Martínez-Viera. But she also dressed impeccably, kept the many apartments that she rented well-kept and clean. Viera believed in God and sang like an angel, Martínez-Viera said during a recent interview at her Brooklyn Street home. Wrapped in a white blanket, she sobbed as she spoke about her mother.

Once Viera became addicted to alcohol and drugs, her daughter said, nothing helped shake that monkey off her back. Even so, Martínez-Viera never gave up finding treatments for her mother — even placing her in programs in Buffalo and Syracuse to remove her from her familiar haunts. Following these attempts, Viera would stay clean for a while. But it never lasted.

"She was killing herself slowly," Martínez-Viera remarked. "Probably for a lifetime, I watched her do that."

There are images and moments of despair that Martínez-Viera does wish she could forget: The time her mother held a knife to her throat and begged her young daughter to cure her. The time Martínez-Viera sold a gold necklace to buy drugs for her mother, whom she had found lying on the couch in their apartment violently shaking and vomiting from withdrawal.

"I didn’t want to do this," shouted Martínez-Viera, physically shaking at the memory. "But you have to because it’s your mother."

Lillian Ayala knew Viera and was sad to hear her life had come to such a tragic end. But as a counselor, Ayala said that she believes there is always hope for the people who seek treatment at Esperanza Latina, which provides outpatient and group-therapy services. But the addict has to believe in that hope too, she noted.

"There has to be a willingness. Maria never had the willingness," said Ayala, a clinical supervisor. "That was such a tragedy."

Substance abuse — and especially alcoholism — is not always viewed as a serious disease by Latinos, especially since drinking plays such a prominent role in Latino celebrations, Ayala noted.

According to a national survey’s results released earlier this year by the Substance Abuse and Mental Health Services Administration, 55 percent of non-Hispanic U.S. adults use alcohol and 8 percent use drugs, as compared to 46 percent and 6.5 percent rates of use, respectively, for Hispanic Americans. Also, past-month binge-alcohol use is higher among Hispanics than the national average. (The survey may be found at www.oas.samhsa.gov/2k10/184/HispanicAdults.htm.)

"In our culture, we hear, "Shameless,’ " she added. "The most damage is done when the family offers no support."

Latino women who become addicts face negative societal attitudes about their behavior, which makes it more difficult for a woman to seek out treatment.

"More than anything, it is a great stigma for the women … and they are scared to seek help," said Charol Rios, Latino program supervisor for outpatient services with Catholic Family Center’s Restart program, which currently serves 75 clients — mainly men — who are mostly referred by the legal or social services systems.

Latinas also face a double standard because it is seen as culturally acceptable for men to drink and even get drunk, said Luisa Baars, who helped create the Esperanza Latina program during her tenure at the Health Association. The program started out in a former diocesan building at the intersection of North Clinton and Clifford avenues in the 1990s and currently operates under the Huther-Doyle umbrella at 325 N. Clinton Ave.

"It’s OK for a man to drink and do these things but never for the woman," she said. "It’s our number one problem."

For many women, the addiction is a result of some trauma, whether it be physical, sexual or mental abuse or if they are caught in a domestic-violence situation, noted Rios, a Puerto Rico native.

For those clients whose addiction stems from mental-health issues, both Esperanza Latina and Restart refer them to such programs as Lazos Fuertes run by the University of Rochester Medical Center or to Unity Healthy System, St. Mary’s Hospital or Rochester Mental Health Center. Unfortunately, Ayala said, most of those programs have few Spanish-speaking therapists, which presents another barrier to treatment.

Despite her outwardly vivacious nature, Viera was filled with a sadness she could not shake, which took her on a cycle of addiction that she could not break, Martínez-Viera said.

While Martínez-Viera never gave up hope that her mother could change, she said that the rest of her family did wash their hands of her mother after seeing her through unsuccessful treatments, a situation that Father Laurence Tracy said is common. That is why he held an outdoor memorial service for Viera on the very street corner where she had lived.

"I did this service … for her street family," he said. "Chemical dependency is recognized as a (disease), not a vice. The only vice is not to try and get help. But she did try. The rehab just didn’t work, which is also very common. There is no magic cure."

Baars said that the feelings of guilt and shame that create these vicious cycles also lead an addict to self-medication and self destruction, as Viera did.

"For Latinos, woman are the backbone of the house," Baars remarked. "The more they blame themselves (for their addictions), the more they turn to drugs and alcohol to escape those feelings. … And if she’s in need of help, who’s there to provide the help?"