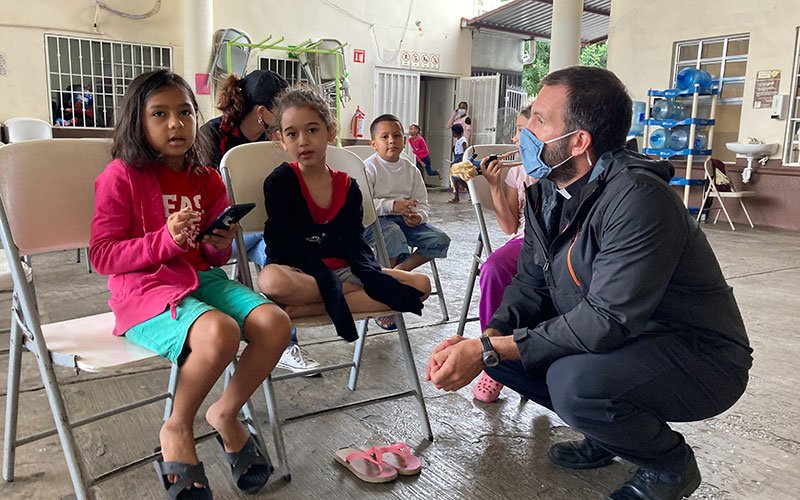 REYNOSA, Mexico (CNS) — In a homily delivered at a Mass for migrants disappointed that U.S.-imposed border restrictions would remain in place, Jesuit Father Brian Strassburger told them: Title 42 is not God’s plan.

“You’re not alone,” he said May 24 at the diocesan migrant shelter in Reynosa, which borders McAllen, Texas. “We’re all brothers and sisters in Christ.”

Title 42 is a pandemic health provision, which facilitated the rapid expulsion of nearly 1.9 million migrants and asylum-seekers back to Mexico — often to dangerous border cities controlled by drug cartels. President Joe Biden’s administration planned to lift Title 42 on May 23, but a federal judge in Louisiana ordered that it remain in place.

Migrants converged on the borderlands in advance of its scheduled lifting, joining the thousands of potential asylum-seekers already waiting in cities such as Reynosa for the opportunity to present their petitions to U.S. officials.

Father Strassburger called delaying the lifting of Title 42, “upsetting and unjust, but not surprising.” In the city of Tijuana, Scalabrinian Father Pat Murphy said, “it’s been a frustrating experience.”

He called the eventual lifting of Title 42, “A return to normalcy. (People) kind of forget what normal was like, that there was a system of asylum. It (was) always backlogged, but now they promise to be better prepared.”

Migrants, meanwhile, arrived in Mexican border cities in advance of May 23, though some said they had no idea Title 42 even existed prior to leaving their countries of origin.

Marleny, a 35-year-old native of El Salvador, said smugglers told her in 2021 that mothers with children would be admitted to the United States. But she was turned back after attempting to enter with her 8-year-old son. She had hoped to join her husband, who fled El Salvador in 2017 after receiving threats and is currently living in Los Angeles.

She told Catholic News Service that U.S. immigration officials did not tell her she was being returned to Mexico and used the geolocation in WhatsApp messages with her husband to discover she was in Reynosa, where drug cartels prey upon migrants and control access to crossing the Rio Grande River.

An estimated 2,000 migrants lived for months in a tent camp in the center of Reynosa near the international border bridge. Her son fell ill with diarrhea in the camp’s squalid conditions as residents endured heat waves and cold snaps and a lack of sanitation. They depended on donations of food and supplies from church groups and kindhearted Americans. Criminals and cops alike raided the camp to kidnap and rob migrants.

Reynosa officials cleared the camp in May, forcing residents to relocate to migrant shelters, provided space was available.

“The heat waves are the most difficult thing here,” said Rosabla Peralta, a Honduran who fled violence and was returned to Reynosa. “There’s (also) depression that you can’t endure. You feel so stressed that sometimes you get sick from so much worry.”

In December, she paid smugglers $1,400 to take her son across the river, where he was left for border patrol agents to collect and eventually be reunited with his father. CBS News, citing government documents, found 12,212 re-entries by migrant minors previously expelled under Title 42.

“What I would like to legally cross one day and that they give me the opportunities to fix my paperwork there and request asylum,” Marleny said in April. “We’re all here with the same dream, the same hopes.”

Rules for Title 42 can apply somewhat capriciously, according to migrant activists. In the months leading to the scheduled May 23 lifting of the restrictions, “20 to 30 families” were admitted under “humanitarian parole” provisions — which considers factors such as hardships and illness — through the Reynosa port of entry, according to Father Strassburger.

Advocates in other border cities reported similar cases of humanitarian parole, including 20,000 Ukrainians fleeing conflict. Nicaraguans, Cubans and Venezuelans also were exempt from Title 42 — given their governments’ poor relations with the United States — though Mexico recently agreed to accept a limited number of returned Nicaraguans.

“It’s totalitarian,” said Lisbeth Pastán, a Nicaraguan admitted into the U.S. A bank manager and owner of a small coffee farm, Pastán said her brother was killed in 2018 by paramilitaries for protesting the government.

Father Strassburger and a Jesuit colleague, Father Louis Hotop, serve in the Diocese of Brownsville, Texas, and cross into Reynosa twice weekly to celebrate Mass and visit migrant shelters.

Some of the migrants hold a Bible study after Mass. Father Strassburger also convened camp residents under a tarp to speak about the synod — which, he said, responded to a request from Bishop Daniel E. Flores of Brownsville “to capture the voice of migrants, even in some small way.”

At a Mass celebrated in one of the tent camp kitchens April 7, Father Hotop prayed, “That governments and nations will respect human rights,” and, “that we won’t be more concerned with building walls than building bridges.”

But he said of the migrants, “They’re not waiting in vain. … There’s going to be a fight over Title 42 being lifted. We’re nervous about that (and) we don’t want to give people false hope about what lies ahead.”