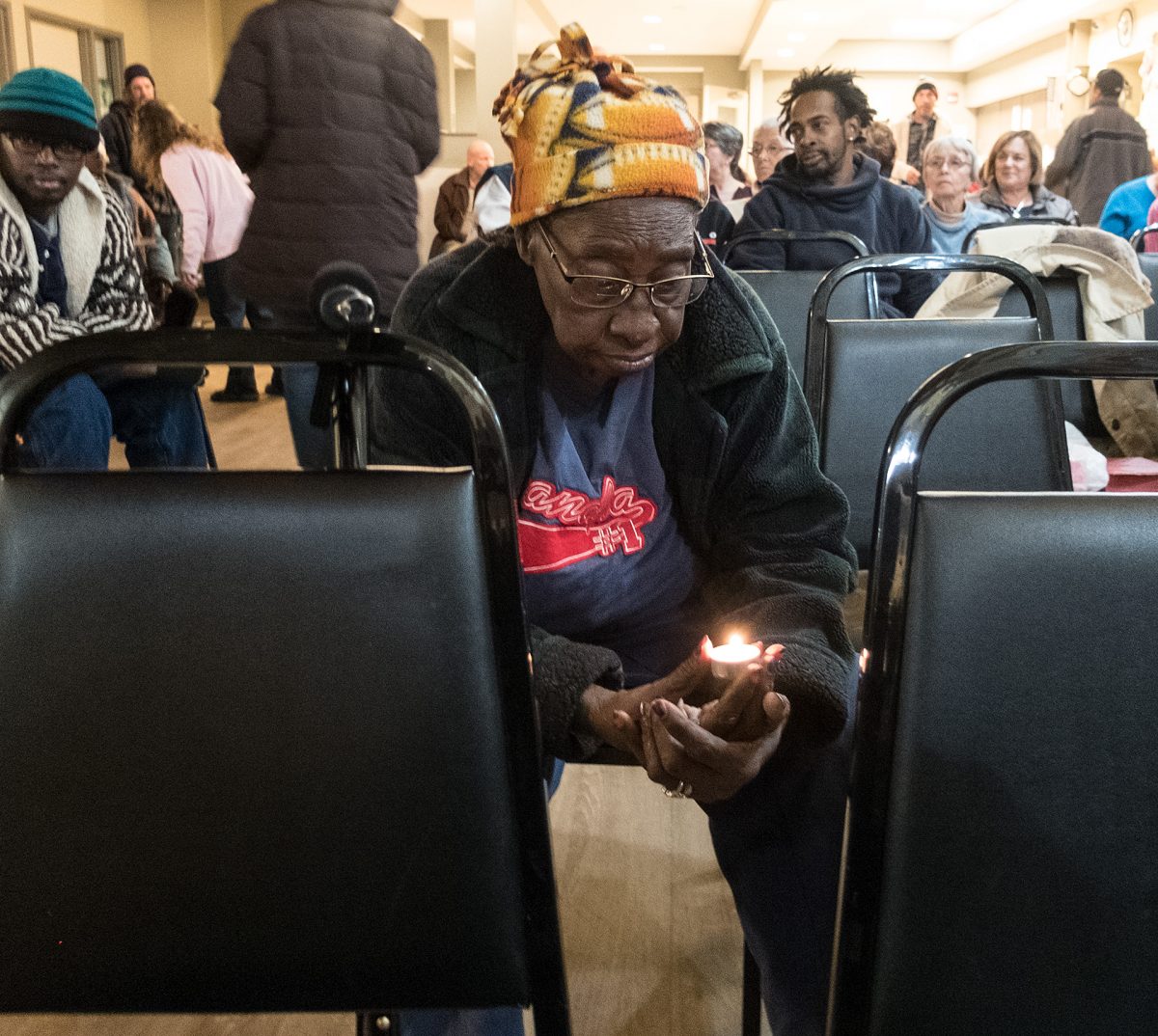 Betty Hall prays while holding a candle during the Interfaith Prayer Service for an End to Poverty at the House of Mercy on Nov. 15. The service is part of a weeklong events leading up to the Day of the Poor. Courier Photo by John Haeger.

ROCHESTER — Despite communitywide efforts to better meet the needs of the homeless, social-justice advocates and shelter directors say the number of people who lack housing is on the rise due in part to the city’s extreme poverty and the opioid crisis.

A count of homeless individuals conducted in January of 2016 and 2017 found about 50 people sleeping on the streets because nearby shelters were full, said the Rev. Peter Peters, chairman of the Rochester Emergency Action Committee for the Homeless (REACH).

While that number is high, the actual amount is probably more, noted Andy Carey of MC Collaborative, a care-management agency that offers a variety of support services for individual struggling economically or emotionally. Carey said the homeless censuses Rev. Peters referred to represent a significant under count since they are conducted with a limited number of volunteers on a single day during the coldest month of the year. The volunteers are not allowed to trespass, and the cold drives homeless individuals into places that may be difficult to find, he added.

“We are trying to get better at it, but oftentimes our volunteers fill out the surveys incorrectly,” Carey added. “So many people are not counted.”

Rev. Peters said the number of displaced families coming to Rochester from Puerto Rico after Hurricane Maria also could drive up the numbers of homeless. Hilda Rosario Escher, executive director and CEO of Ibero-American Action League, said finding housing for these families is among the top priorities for the government and community agencies working with Ibero to help them. Many have been staying at hotels and shelters when they first arrive as well as with relatives, she said.

Only a few years ago, Carey noted that local social-justice advocates seemed to feel that the homeless issue would be solved with the planned expansion of the House of Mercy shelter, which opened its new 82-bed facility earlier this year at 285 Ormond St.

“Then the reality on the ground is there were more homeless,” he said, adding that he is working with a lot of new people who have lost their homes because of drug addiction or mental illness.

Kelly Finnigan, operations director at the House of Mercy, said the shelter has been near or at capacity since its doors opened March 20. Additionally, the 19 spots at St. Joseph’s House of Hospitality have been full every night in recent months, said James Murphy, a Catholic Worker at St. Joseph’s.

Finnigan said the House of Mercy’s capacity situation is a result of the city’s rate of extreme poverty — defined as less than half of the federal poverty line — which increased from 16.4 percent to 17 percent from 2014 to 2017, making Rochester the fourth poorest city in the United States among the top 75 metropolitan areas, according to the U.S. Census Bureau’s five-year estimates (census.gov).

“If you have extreme poverty, in a year or two or three, it’s going to lead to increased rates of homelessness,” Finnigan said. “Because as folks get poorer and poorer, the last thing they get rid of is housing.”

In response to local shelters being at capacity, REACH has opened a temporary shelter for the third year in a row, Rev. Peters said. The shelter is located at 102 N. Union St. and is being operated in collaboration with Dimitri House, which owns the property, he said. The shelter, which will house up to 24 men and women, opened Nov. 22 and will be available through mid-April.

The opening of the REACH shelter provides a good opportunity for county officials, shelter operators and homeless advocates to reassess Rochester’s emergency housing system, Finnigan noted. Improved communication between Monroe’s 211 call center, the county and shelter operators is needed, because during peak times in the winter months, the process to assess and place a homeless individual can take up to two hours, he said. In addition, individuals who have been “sanctioned” by the county Department of Human Services for such violations as missing an appointment with the department or a potential landlord are not allowed to be placed in county-funded shelters. Finnigan noted that the House of Mercy — which is not county funded — is sometimes chastised by other shelter operators or government officials for being too lenient about who they allow into the shelter.

Since a shelter like the House of Mercy does not rely on public funds for its operation, it can be more flexible in who it serves, said Erica King, clinical supervisor for Catholic Family Center’s Community Resource Services. CFC’s Francis Center shelter tries to provide hospitality to as many homeless individuals referred there as best as possible, she said, but it faces restrictions due to county funding and staffing requirements.

King noted that many of the individuals who have been sanctioned by DHS for seemingly small infractions have faced traumas that make it difficult for them to concentrate and reorganize their lives as expected. In light of that, she said the system should provide a cushion to allow such individuals to make mistakes and overcome them without penalty.

“I wish that on whatever level, (our system) would be more trauma-informed,” she said. “For some folks, they are going to need more time to work on things.”

Like all social-service districts in New York, Monroe County is mandated to comply with the Gov. Andrew Cuomo’s executive order to shield the homeless from inclement winter weather, said Monroe County spokesman Jesse Sleezer. The order requires that all individuals found homeless and at risk due to cold conditions will be eligible for placement at local shelters, regardless of sanction status, he said.

As winter weather approaches, DHS staff have begun conducting outreach at known homeless encampments and will offer placements to those discovered during these contacts through March, at a minimum, Sleezer said. The County spends about $5 million annually to provide beds for the homeless at nearly 20 temporary housing facilities, he added.

Finding a way to provide more time and support and also address the factors causing Rochester’s rise in homelessness will require a community conversation and working with government officials for permanent solutions, such as appropriate housing options for high-needs tenants, Finnigan said.

“A shelter should be a temporary solution for housing in a crisis,” he said. “Creating more (shelter) beds is not the answer. … None of us like shelter beds. We want permanent housing.”

Finding the right permanent housing fit for the homeless population is tough, Finnigan noted, because shelter operators are working with individuals who are not only really poor, but also often have a host of other challenges, including mental-health and substance-abuse issues.

“To rent to our folks is not easy,” he said, noting that they need a place that’s more forgiving and understanding about their struggles with drug and alcohol abuse.

Murphy noted that new affordable-housing projects have yet to accept chronically homeless individuals who have been referred by St. Joseph’s House of Hospitality, even though they have vouchers from U.S. Housing and Urban Development.

“Access to (permanent) housing is a real problem,” he remarked.