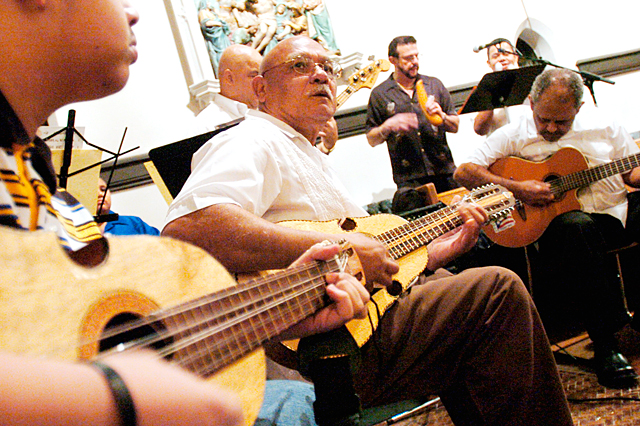 Pedro Nuñez, a pioneer in folkloric music and the Hispanic faith community of Rochester, died May 1, 2016. He was 80 years old.

Mr. Nuñez was born in Cayey, Puerto Rico, and moved to Rochester in 1955 with his wife, Flora Pérez. They were married for 58 years.

"Just like everybody else, he worked on the farms and came (to Rochester) for a better life," said Ida Pérez, his niece and goddaughter.

Mr. Nuñez also worked at a factory, Federal Stampings Inc., for a few years before joining the United Way of Greater Rochester, she added. He worked for the agency for 30 years, retiring as head custodian several years ago, Pérez said.

Mr. Nuñez also formed one of the first Latin music groups in Rochester in 1955, she noted. The group, Jacagua, opened for many American music bands at the era’s well-known country clubs, including the Rochester Club.

"After that (though), he dedicated his music to playing for family and church," remarked Father Laurence Tracy, who concelebrated the funeral Mass for Mr. Nuñez on May 6, 2016, at Holy Apostles Church.

In 1963, Mr. Nuñez founded at Our Lady of Mt. Carmel Church the Fiesta Jibara, an annual Christmas time event that continues to this day at Our Lady of the Americas Church, said Pérez. Prior to that, he also had helped start a Spanish-language Mass at Mt. Carmel, she said.

"He kind of mentored me into the Puerto Rican community when I was a newly ordained young priest," said Father Tracy. "He talked about the music, the values of our community, family values. … We were on opposite ends of the spectrum in terms of politics, but in terms of being a close-knit family and love of community, we were very close together."

His love for family and community was evident in the choice by Mr. Nuñez not to pursue a career playing the cuatro guitar, a traditional Puerto Rican 10-stringed instrument, Pérez and Father Tracy concurred. A famous cuatrista, Maso Rivera, once declared Nuñez "the Maso Rivera of Rochester," noted Father Tracy.

"He could have been famous worldwide," Pérez added. "But he loved his community here. He loved his church here and the people here. … He was happy here."

Forty-five years ago, he did form another band, Pedro Nuñez y su Conjunto Típico, which played at many church and community functions, including the first Puerto Rican Festival in 1969. Pérez noted that Mr. Nuñez and Belen Colón also founded Rosarios de Cruz, a recitation of the rosary with traditional music that is celebrated every May as part of the Feast of the Cross.

"The biggest role Pedro played in the community was keeping ‘la música tradicional’ (folkloric music) of Puerto Rico alive," she said. "For the many people who have never been to Puerto Rico and never had experiences there, he brought a little bit of that here with his music."

Mr. Nuñez was an artisan who carved cuatros as doorbells and other mementos of the island, she said. He even fashioned his own cuatro guitar out of a sardine can and some wire when he was 6 years old, Pérez said, when he decided he wanted to play the instrument like his older brother, Ismael.

"He taught himself," she said. "After a couple of years, he mastered it and bypassed his brother."

A copy of an album that he recorded with his group, "Rochester Se Puertorriqueñiza," is held in the arts archives of Niagara University, Pérez added.

In addition to his wife, Mr. Nuñez is survived by his son and daughter-in-law, Orlando and Yolanda Nuñez, and daughter and son-in-law, Milagro and Frank Gúzman; five grandchildren; six great-grandchildren; and several nieces and nephews.