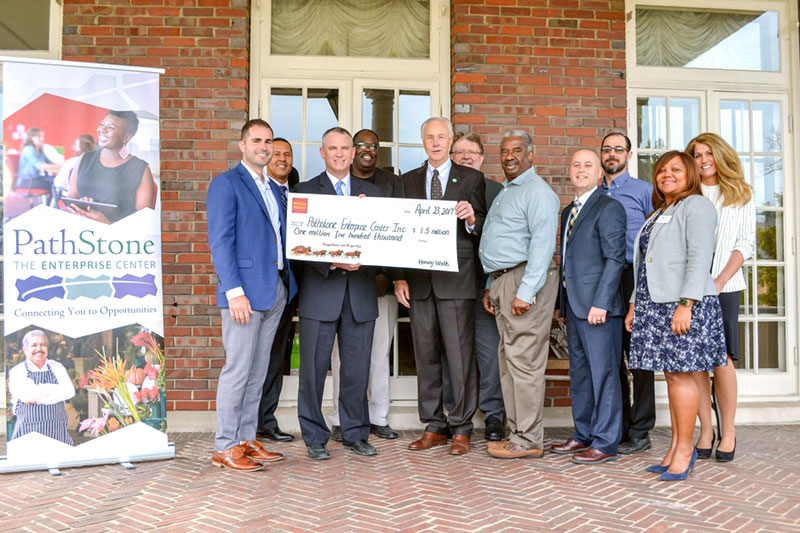 PathStone Enterprise Center, an affiliate of PathStone Corp. in Rochester, recently received a $1.5 million grant that it will use to help small businesses in Puerto Rico that are still struggling to recover from the devastation of Hurricane Maria in 2017.

The enterprise center is one of nine Community Development Financial Institutions from around the country to share in $18.5 million in funds from the Wells Fargo Works for Small Business: Diverse Community Capital program. CDFIs provide credit and financial services to underserved markets and populations.

Hubert Van Tol, president of the enterprise center, said half of the organization’s grant was distributed to loan funds used to help small businesses; a portion was used to manage operations at the center’s office in Ponce, Puerto Rico; and the remainder is being used to further help existing recovery efforts in Puerto Rico.

At the time the hurricane hit, PathStone was owed $1 million worth of loans from around 50 businesses in Puerto Rico, said Van Tol, who explained that the loans had to be restructured as a result.

“When the island had first been devastated by Maria, the enterprise center charged a few of their loans off, restructured other existing loans and received a grant to help small businesses by providing an average of $5,000 grants to 15 different businesses,” he said.

Van Tol noted that PathStone plans to establish a loan fund with more flexible terms to help stabilize small businesses in Puerto Rico due to the economic challenges they are currently facing. The center has just approved its sixth small business loan funded by the Wells Fargo grant, he said.

Van Tol said that the center also is looking to focus on helping Puerto Rico’s agricultural industry, which was significantly affected by Hurricane Maria. He said PathStone hopes to assist with irrigation and sustainability efforts throughout the island.

In addition to helping small businesses in Puerto Rico, PathStone also has funded businesses that want to help with recovery efforts on the island.

For example, in 2018, Van Tol said the enterprise center invested a quarter of a million dollars in inverSOL, which David Rodríguez founded in Rochester in April of that year. inverSOL is a subsidiary of the Rochester telecommunications engineering company Council Rock, of which Rodríguez is president.

inverSOL was born of Rodríguez’s concern for his family in Puerto Rico.

Originally from Patillas, Puerto Rico, Rodríguez still owns a house and office on the island but was not able to visit to check on his property or family until December 2017, nearly three months after Hurricane Maria had hit.

“I was trying to get back for a whole bunch of stuff,” said Rodríguez. “I needed to check on my property and also my family, as well as, my wife’s, since there was no way to communicate with them.”

When he was finally able to visit, he found that his uncle, who is in his 80s, was running a gas generator within his home to power essential household items. According to Rodríguez, his uncle could not fit the generator through the back door and did not want to leave it on the front porch for fear of theft in desperate times.

Rodríguez said he thought such use of a gas-powered generator was a dangerous solution to the power outages on the island after Hurricane Maria. With the funding he received from PathStone, he said he founded inverSOL and developed a solar-powered generator that can be used to power such basic appliances as refrigerators, televisions and smartphones.