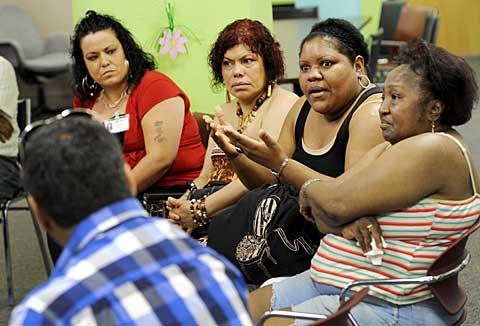 ROCHESTER — A forum about mayoral control of city schools — and what impact Mayor Robert Duffy’s bid for lieutenant governor will have on that proposal — turned into a discussion on how the Latino community needs to do a better job communicating with the school district.

Because Latino families need guidance on how to navigate the district, José Cruz — a school board commissioner and city employee who facilitated the May 27 forum — promised to make the forum a monthly occurrence.

But Cruz asked the 15 people gathered at the initial forum at the Puerto Rican Youth Development and Resource Center to commit to bringing one more person to the next meeting — a pattern that he said he hoped would continue at each subsequent meeting. The May 27 forum was held in coordination with Ibero-American Action League.

"If you start to have 100 people every month, then you have an impact," Cruz said.

Most of the people at the May 27 forum said that they were opposed to the idea of mayoral control of the school district.

The governor presented a bill outlining mayoral governance of Rochester schools to the state legislature on June 9, according to a press release.

The "City of Rochester School District Governance Reform Act" calls for a five-year trial period, according to the governor’s statement. The legislation would enable the Education Commission, in consultation with four Community Schools Advisory Councils, to develop policy changes. The mayor would appoint five non-paid members to a newly created Education Commission, with City Council adding four members.The leglislation would hold the mayor accountable for producing results.

Duffy first announced his intention to seek governance of the school district during his inauguration speech this year. He has subsequently released details of his plan, which includes a "family navigator" in schools to provide guidance on services available from the school, city, county, state and other agencies. The plan also calls for consolidation of school and city services such as maintenance, finance and security. His proposal would replace the current board with a panel for education, which would be appointed by the mayor and city council.

The governor presented a bill outlining mayoral governance of Rochester schools to the state legislature on June 9, according to a press release.

Julio López said that control should stay with the current school board structure, with decisions being made by the commissioners who know the issues best. His youngest of three daughters currently attends James Monroe High School.

"I don’t want (the district) under government control," he added.

Fred López, whose grandchildren attend city schools, said that he also does not support the mayoral governance model. But he added that he wonders what will become of the proposal if the mayor becomes lieutenant governor.

Duffy has said he remains hopeful that the mayoral-control initiative will continue even if he is not at the helm in Rochester, he stated during the May 26 press conference announcing his selection as Attorney General Andrew Cuomo’s running mate.

"It’s a systemic change that needs to be done," Duffy said, who added that 70 percent of crimes in Rochester are committed by high-school dropouts. "My hope is to push for a bill (allowing mayoral control of Rochester’s schools) … for every minute I’m in office."

In a statement, Superintendent Jean-Claude Brizard said that Duffy’s announcement to run for lieutenant governor does not change the work the school district is doing on a daily basis.

"Our work is based on effective practices that we have gleaned from the best schools and districts across the country — including those with mayoral control and those without — and this work will continue regardless of who governs the district, be it the board of education or the mayor," Brizard stated. "Fundamentally, the most important work is what our teachers do in the classroom."

If mayoral-control legislation for Rochester — which Gov. David Paterson’s office is currently working on — does emerge, Brizard said that his expectation is it will create sustainable governance no matter who is mayor or superintendent.

Fred López said that he remains unconvinced that mayoral control is a panacea for the district’s ills while acknowledging change is needed.

"Something needs to be done in our school system," he added, noting that he thinks the superintendent’s strategic plan can make a difference.

Cruz said that he remains neutral on the mayoral-control model but emphasized how complicated an issue it is for Rochester. He explained that the mayor put forth his proposal because of his frustration over the continually low graduation rate — now at 46 percent. For Hispanics, the rate is 39 percent. Mayoral control would allow Duffy to make changes to improve those scores, he added.

At this point, the matter is out of the city’s hands as the Assembly considers the governor’s proposal, Cruz remarked.

"If legislation passes, control moves to the mayor July 1, no matter who it is (in the mayor’s office)," Cruz explained. "The Assembly votes, not us."

Following the discussion of the mayoral-control issue, a few of the community members at the forum expressed frustration with Latino families not receiving information about services available at the schools and the lack of bilingual services for their children.

Yohaira Volcy of the Dominican Republic explained how her son, upon being enrolled at school, was expected to do English homework without any kind of language support.

Fred López added that he had similar experiences as a student in the city schools, but that was decades ago. However, he had teachers who did take a personal interest in his schooling, which made all the difference, he added.

Cruz said that Hispanic families, who culturally do not question the authority of teachers and school officials, need to start speaking up to ensure their children receive the education they deserve. In a district where 7,000 Hispanic students comprise the 31,000-student population, Cruz said that Hispanic parents could be a powerful bloc.

"As a commissioner, I’ve seen things that have left me speechless," he said.

For example, he said that after being newly elected as a school commissioner, he sought Hispanic nominations for the board’s search for a community member representative on each of its committees.

"We didn’t receive a single application," he said. "That’s the problem with us. We have not lived up to our responsibility as a community."