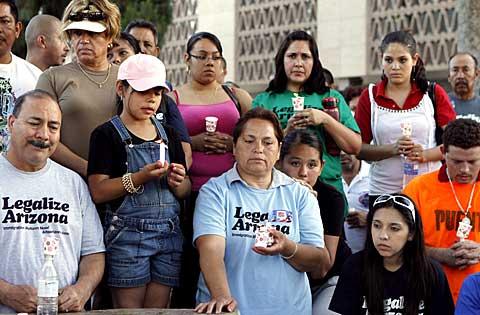 The government said July 6 that its immigration-enforcement policy "targets … dangerous aliens," including violent criminals, gang members, drug traffickers and others "who pose a danger to the national security and a risk to public safety" while the Arizona law would force federal officials to cope with a flood of illegal immigrants who pose no danger.

The lawsuit urges a federal judge in Phoenix to block Arizona’s law from taking effect later this month. It adds new weight on the side of the pending suits by immigrants-rights advocates, who say Arizona’s stepped-up enforcement would lead to racial profiling and harassment of Latinos.

The move raises the political stakes for the White House. President Barack Obama made no public statement upon the filing of the lawsuit, but Attorney General Eric Holder and Homeland Security Secretary Janet Napolitano — a former Arizona governor — said the state was out of line.

"Setting immigration policy and enforcing immigration law is a national responsibility," Holder said. "A patchwork of state laws will only create more problems than it solves."

Republican leaders, reacting quickly, said Washington and the administration deserve the blame for failing to enforce the immigration laws over many years.

"Suing the people of Arizona for attempting to do a job the federal government has utterly failed to execute will not help secure our borders," said Sen. Mitch McConnell, R-Ky., the Republican leader of the Senate.

In April, the Arizona Legislature voted to "discourage and deter" illegal immigrants from staying in the state by authorizing the police to question immigrants under some circumstances. When an officer has "reasonable suspicion" that a person is not a legal resident, he is to ask questions and can take into custody those who cannot show they are legal residents. These illegal residents could be convicted of a state crime and then turned over to federal immigration agents.

But the administration officials said Arizona’s policy "disrupts the national enforcement regime." Its legal brief explains what U.S. immigration officials have long acknowledged: They do not wish to arrest or deport the vast majority of the 11 million illegal immigrants living in the United States.

The U.S. Immigration and Customs Enforcement Agency said it is on track to deport about 400,000 people this year. But the agency said last week it does not seek to deport illegal immigrants who were brought to the U.S. as children or who are caring for children or close relatives.

The administration’s lawsuit rests on the Constitution and its declaration that the laws of the United States are the "supreme law of the land." State laws that conflict with federal law are deemed to be "pre-empted."

"A state may not establish its own immigration policy," the Justice Department argued. The state’s law should be struck down because immigration "remains the exclusive province of the federal government." If the Arizona law were to be put into effect, the government said, it would "disrupt" the federal efforts and upset the "careful balance of immigration enforcement priorities."

The lawsuit was cheered by a Latino community that has grown increasingly disillusioned with the Obama administration over the failure to revamp the immigration system. A Gallup poll showed that Obama’s approval rating among Latinos dropped from 69 percent in January to 57 percent in May. While Latino voters are unlikely to swing to the Republican Party in great numbers, they could damage the prospects of Democratic candidates in the midterm elections in November by staying home. Over the past week, the Obama administration has taken steps to re-energize grassroots Latino voters.

But nationwide polls also have found that from 50 percent to 60 percent of Americans support Arizona’s effort to arrest more illegal immigrants, and politicians elsewhere have proposed similar provisions in their states.

As of June 30, similar bills had been introduced in five other states, according to the National Council of State Legislatures: South Carolina, Pennsylvania, Minnesota, Rhode Island and Michigan.

In Florida, Rick Scott, a Naples multimillionaire who has made illegal immigration a centerpiece of his campaign to be the Republican candidate for governor, recently issued a television ad blasting his primary opponent, Attorney General Bill McCollum, over the Arizona law. McCollum says he supports it, but adds it’s not needed in Florida.

"Rick Scott backs Arizona’s law. He’ll bring it to Florida and let our police check if the people they arrest are here legally," the ad says.

Arizona Gov. Janice Brewer derided Obama’s intervention as "nothing more than a massive waste of taxpayer funds. These funds could be better used against the violent Mexican cartels than the people of Arizona."

She also pledged to defend the measure in court: "The truth is the Arizona law is both reasonable and constitutional. It mirrors substantially what has been federal law in the United States for many decades. Arizona’s law is designed to complement, not supplant, enforcement of federal immigration laws."

The new lawsuit also puts vulnerable Democrats in a difficult spot, given the popularity of Arizona’s tough new law. Rep. Ann Kirkpatrick, D-Ariz., who is in a tough re-election fight, issued a statement July 6 calling the lawsuit "a sideshow distracting us from the real task at hand."

The legal battle may be decided on a fast track. U.S. District Judge Susan Bolton has set a hearing for July 22 in Phoenix to hear arguments on whether to block the law from going into effect on July 28. If she issues a temporary injunction, the state can immediately appeal to the 9th U.S. Circuit Court of Appeals in San Francisco, and from there, to the U.S. Supreme Court.

(Contributing to this story were Ken Dilanian and Peter Nicholas in the Tribune Washington Bureau and Los Angeles Times staff writer Nicholas Riccardi in Denver.)