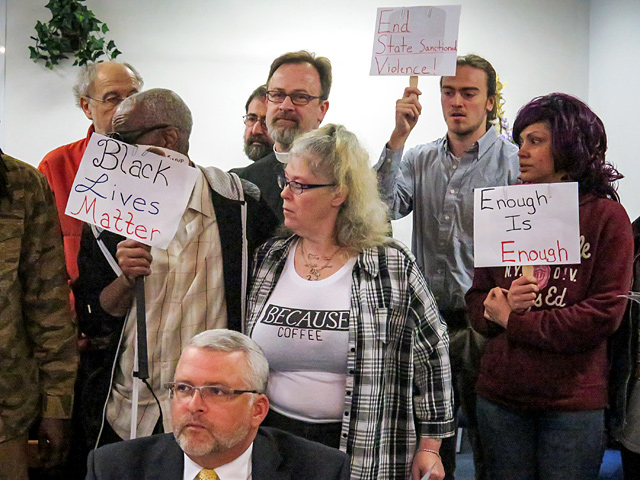 Local faith leaders and city residents stand behind attorney Charles Burwit during an April 11 press conference at Inner Faith Gospel Tabernacle church in Rochester to call for improved police accountability. During the press conference, advocacy groups Rochester Coalition for Police Reform and Enough is Enough presented a proposal to revamp the review process for cases where police abuse is alleged.

ROCHESTER — A group of activists and residents is calling for an overhaul of the process used to review allegations of police abuse.

During an April 11 press conference at Inner Faith Gospel Tabernacle in Rochester, city residents as well as members of Enough is Enough, the Coalition for Police Reform and several faith groups presented a proposal for the city to establish a Police Accountability Board to replace the current Civilian Review Board.

In addition to the call for greater transparency and accountability, Enough is Enough and the Rochester Coalition for Police Reform also produced a 111-page report (http://bit.ly/2phUcDo) on allegations of excessive use of force during the period 2002 to 2015. These allegations were investigated by the RPD and the Civilian Review Board that was created by city council in 1992.

The report’s authors, Barbara Lacker-Ware and Ted Forsyth of Enough is Enough, said the group formed in 2013 to respond to what they asserted was a growing number of allegations of police abuse.

Lacker-Ware said the RPD’s current process for handling a civilian complaint against one or more officers begins with an interview of the civilian by the RPD’s Professional Standards Section (PSS), which serves as the department’s Internal Affairs division. She said findings of PSS are turned over to the Civilian Review Board (CRB), which comprises a variable number of city residents, who then review case information from the PSS findings and recommendations.

But according to information from RPD’s Chief Michael Ciminelli, CRB members have access to all evidence generated through the PSS investigation, including reports and other documentation, photographs, videos, and statements by all parties involved; the CRB also can direct PSS to conduct additional investigation if members consider it necessary.

Depending on their findings, PSS and CRB may independently determine that the officers are exonerated or that allegations against them are either unprovable or sustained, the latter meaning that misconduct has been established, Lacker-Ware added. The CRB also may make training and policy recommendations, according to information from Ciminelli.

Based on recommendations from PSS and the CRB, the police chief then determines whether to dismiss or sustain a complaint, according to Lacker-Ware. If the complaint is sustained, the chief may initiate disciplinary action, which she said has been a rare occurrance.

According to an e-mail from Ciminelli, a letter from his office is sent to the civilian who filed the complaint, informing him or her of the results of the investigation. But Lacker-Ware said the civilian does not get an opportunity to appeal the decision or learn about any disciplinary action.

Ciminelli declined to comment about calls for changes to the current review process.

In their report, Enough is Enough and the Rochester Coalition for Police Reform assert that there is "a lack of accountability and transparency within the RPD, resulting in continued occurrences of police officer misconduct."

"(The process) involves the police investigating themselves, and there is no independent review of police misconduct that calls officers to account for their actions or enacts appropriate discipline that would deter the misconduct," according to the report.

* From 2002 to 2015, 2 percent of 1,173 civilian complaints were sustained by the Rochester chief of police, and 5 percent by the Civilian Review Board. By contrast, the report found that the city of Syracuse’s Civilian Review Board sustained 23 percent of 26 cases in 2015. The report, notes that a 2012 restructuring of Syracuse’s civilian review system resulted in a drop in civilian complaints as well as higher percentages of sustain rates.

* From 2008 to 2013, Rochester’s Professional Standards Section did not sustain any civilian complaints about unnecessary use of force. Lacker-Ware said this finding shows that "time after time, police officers who have engaged in unnecessary use of force against civilians are back on the streets with no visible consequences for their behavior."

* The harshest penalties handed out for any sustained complaints were six suspensions over a 14-year period.

"The current process of reviewing civilian complaints (against RPD officers) is not fair. It is not just and it must be changed," Lacker-Ware said.

In addition, the report asserts that the 1992 ordinance establishing the current review process wasn’t transparent enough from the outset, said Forsyth.

"The ordinance itself does not address the need for an independent body to provide true accountability and transparency in incidents where civilians are mistreated by the police," Forsyth added. "There is no real opportunity for civilians to have their complaints heard in a just and fair process outside of RPD control, short of filing a lawsuit, which is often not realistic due to cost and other factors."

In response to calls for greater police accountability, Rochester City Council President Loretta Scott said the council has approved a resolution to conduct its own investigation into an Aug. 8, 2016, alleged incident of excessive use of force involving the RPD and city resident Ricky Bryant.

The United Christian Leadership Ministry joined with the Bryant family in calling for an independent investigation of the incident, which they say escalated from a case of mistaken identity and ended with officers allegedly beating Bryant and leaving him with a fractured eye socket and other injuries. Bryant’s family held a press conference April 12 to condemn the chief’s decision to sustain only complaints related to officers’ use of pepper spray and failure to properly use body cameras.

According to information from the council office, the city charter empowers city council to investigate city departments, including the review of correspondence, witness statements and material relevant to the topic. The charter also gives the council president the authority to issue a subpoena for this purpose, Scott said.

She added that the council is taking the unprecedented action of mounting its own investigation due to a public perception that there is a need for change in the civilian review process.

"There’s a lack of credibility," Scott noted. "Even if the current process is faultless, if people don’t believe it, there’s a problem."

She said the council also has met with groups that have proposed creating a new Police Accountability Board and will consider that option as well.

"Transparency, accountability and credibility are key," she said in regard to improving relations between police and the community. "We have to move in a direction that will get us there."

If the city were to adopt the proposal presented by Enough is Enough and the Rochester Coalition for Police Reform for an 11-member Police Accountability Board, Forsyth said its members would have subpoena power and would interview their own witnesses. More than 40 community organizations and faith groups — including the Greater Rochester Community of Churches, Rochester ACTS and Ibero-American Action League — have endorsed the creation of a new accountability board.

"I think the Police Accountability Board is going to help to curb excessive use of force by police officers," added attorney Charles Burkwit, who is representing Bryant’s family. "Police officers will think before they act … knowing their actions will be investigated by an independent agency."