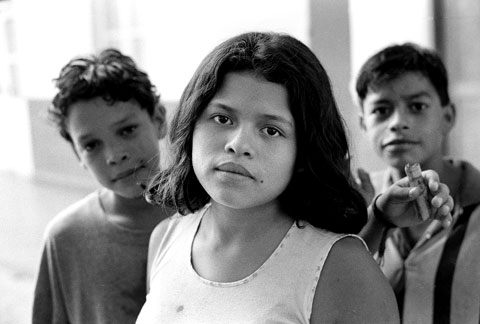 The Diocese of Rochester is teaming up with other local groups to combat the tragedy of human trafficking, which has persisted in the United States long after the country’s abolition of slavery.

And when the diocesan Public Policy Committee decided to work toward eradication of this modern-day slavery in the Rochester region, members discovered that the trafficking of women may occur not far from the diocesan Pastoral Center in Gates, said Jann Armantrout, the diocese’s life-issues coordinator.

Once while dining at a nearby restaurant, Armantrout said she glanced at her paper placemat and noticed an ad for a hotel offering half-day services. That’s when she realized she might be too close for comfort to the degradation of women in the form of prostitution, in which women often become unwilling victims due to coercion or drug addiction.

"Every story is horrific," Armantrout said of the research she has been conducting on trafficking. "And it seems so systemic and ingrained in the fabric of our society."

While the work of trying to end trafficking is "emotionally demanding," it is an urgent task that the community must take on, Armantrout said during a public-policy luncheon Sept. 23.

"We want to see what we can do to make our community a safer … place for all of us to live," with dignity for all," she noted.

The diocesan Public Policy Committee will work to increase awareness of the occurrence of human trafficking locally and advocate that such industries as travel and tourism aren’t being used as opportunities to lure victims for such purposes as providing "entertainment" at conferences, for example, Armantrout explained.

"We want to break the cycle of exploitation," she added.

Doing so will involve such traditional partners as the Sisters of St. Joseph, Sisters of Mercy, Feminists for Life, Rochester Area Right to Life, lawmakers at local, state and federal levels, and law-enforcement officials. Surprisingly it also will include working with Planned Parenthood staff members, whom Armantrout invited to provide input at the public-policy luncheon. Because the agency provides rape-crisis services to sexual-assault victims in five counties — Monroe, Livingston, Genesee, Orleans and Wyoming — Planned Parenthood’s health-care providers are on the front lines in screening for trafficking, explained Rick Bartell, the agency’s regional director of education and outreach.

The diocesan campaign to tackle the issue and educate the community about it is part of the Catholic Church’s longstanding commitment to helping such victims of human-trafficking and end slavery in all forms. This commitment, which is rooted in the church’s catechism, was reaffirmed in 1965 during the Second Vatican Council and continues to this day.

"The Catholic Church … in the United States stands ready to work with our government to end this scourge," Miami’s Archbishop Thomas Wenski said in a 2004 report when he served as bishop of Orlando. The report was published by the U.S. Conference of Catholic Bishops’ department of Migration and Refugee Services (www.usccb.org/upload/US-Response-Human-Trafficking-Achievements-and-Challenges-2011.pdf). "We cannot rest until trafficking in human persons is eliminated from the globe."

Human trafficking is defined as the recruiting, transporting, harboring or receiving of people by means of force, fraud or coercion. According to information from the USCCB migration department, trafficking historically has included women and children traded for prostitution or sexual exploitation.

Trafficking can be domestic or international, and may include men and boys as well as such labor victims as farm or construction workers, nannies, nail technicians and massage parlor employees, noted Erie County Sheriff’s Deputy Elizabeth Fildes, head of the Western New York Human Trafficking Task Force.

As law-enforcement officials, members of her office look at a case to see "is it involuntary servitude or debt exchange or bondage or enslavery or sex trade?" she explained. "When we look at all of this as a whole, they (traffickers) must have a process, a means and an end. … Something of value must be exchanged for this person’s work or sex — money or drugs or something of value is given to this victim for it to be trafficking."

Judy Gough, director of migration, refugee and immigration services for Catholic Charities in the Diocese of Hartford, Conn., noted such exchanges arise from traffickers’ warped view of those who become their victims.

"They do not see victims as human beings but as property they can sell over and over," said Gough, who led a webinar (an Internet-based seminar) about trafficking on Sept. 15.

Prior to the 2006 creation of the Western New York Human Trafficking Task Force, Fildes said cases of trafficking were popping up at massage parlors and farms, on website pages such as Craigslist and even during traffic stops. These incidents seemed to suggest trafficking was a prevalent issue in this region.

The task force was created using a $1 million grant from the U.S. Department of Justice, with the money being split between law enforcement and support services provided by the International Institute of Buffalo, Fildes explained. The task force has grown from seven agencies or government offices to 31 groups, including the U.S. Department of Homeland Security, district attorney offices in Buffalo and Rochester, Farmworker Legal Services of New York (FLSNY), and the National Center for Missing and Exploited Children.

Since she began this work, Fildes said the task force has rescued more than 300 victims.

Yet trafficking continues to increase, she said.

"It’s easier to sell a person than it is to sell a gun or drugs," Fildes remarked. "When you look at two people walking down the street, unless you know exactly what’s happening in that relationship, you don’t know if there’s a victim or not. It’s so beneath the surface. It’s hard for law enforcement to find it to discover it to find out what’s going on."

Another startling revelation for most people is that some trafficking victims are U.S. citizens who are lured into the world’s oldest profession, Fildes said. And with the persistence of the current economic downturn, trafficking in the form of prostitution could get even worse, she added.

"Kids that can’t find jobs get desperate," Fildes remarked. "These traffickers know what to ask children. And the victims have low self-esteem. … A lot of times victims don’t feel good about themselves."

She said such girls or boys can easily fall for the charms of a pimp, who showers them with gifts and attention, then asks them to sell their bodies for money to continue buying these gifts. Often, victims don’t realized they’re being coerced because they’re asked to do it "just one time," she added.

Gough agreed that one of the biggest myths in contemporary society is the notion that prostitutes are willing participants.

"They are watched, beaten and drugged to maintain control," she added.

In years past, prostitutes were arrested and prosecuted, but law enforcement since has developed a better understanding of these predatory relationships, Fildes noted.

"At age of 16, it’s kind of crazy to put a person in jail who can’t even consent to sex until 17," Fildes said. "Now, we look at how to prosecute the ‘john’ as a purchaser and the ‘trafficker’ who is the pimp. … These girls can’t keep the money. They don’t make their own decisions. That’s the worse part about this crime."

Sadly, the victims of prostitution keep getting younger, and the Western New York Human Trafficking Task Force has had cases involving girls as young as 12, she added.

"People who work with children need to know about this," Fildes remarked. "These men take away all the freedoms of these girls. She has no choice what to do in her life — where she sleeps or what food she’s going to eat. And when she doesn’t do what she’s told, she gets a beating. In every sense of the definition, she falls into (sex trafficking)."

Gough explained that trafficking victims fall into three categories: bonded labor, forced labor and child labor. Immigrants, she noted, may be found in all three categories.

The U.S. State Department estimates that 14,000 to 17,500 immigrants are brought into this country each year for the purpose of trafficking, Armantrout said, adding that 80 percent of those are women and children.

But federal law enforcement’s emphasis on immigration status during the past decade has created even more opportunities for traffickers to take advantage of migrant workers, asserted Renan Salgado, an investigator and educator with FLSNY’s human-trafficking division.

"Thanks to criminalizing of their documentation status, a lot of (farmworkers) believe they don’t have any rights," he said. "They are being victimized."

Such migrant workers often are smuggled involuntarily into the United States where they are exploited because they don’t have legal status, Gough said, adding that victims come from Asia, Latvia, China, Burma, Cambodia and Russia. In western New York, such victims come primarily from Mexico, Salgado said, and are forced not only to work on farms but also on construction sites, in massage parlors, at hotels, or as nannies or sex workers.

One of the biggest cases illustrating the power traffickers have over migrant workers occurred in 2001, Salgado said. That’s when local law-enforcement officials successfully prosecuted a woman who had contracted with several produce growers in Monroe, Genesee and Orleans counties and kept about 100 workers in indentured service.

"She kept them under strict surveillance with armed guards outside their house," Salgado added. "She chose when to give them money for food or when to feed them. It was pretty much traditional slavery."

The federal Victims of Trafficking and Violence Protection Act was passed around the same time, he noted. The law, which was reauthorized in 2008, provides service agencies such FLSNY with resources and incentives to help these victims.

The legislation also offers protection for migrant workers who come forward while a case against their traffickers is still pending, Salgado explained. Additionally he said, once the criminal case is closed, affected immigrants can apply for temporary residency through U-visas, for immigrants who are victims of criminal activity, and T-visas, which allow certain trafficking victims and immediate family members to temporarily remain and work in the U.S. if they agree to testify against the perpetrators.

Participants at the Sept. 23 public-policy luncheon noted that Congress is discussing whether to continue funding this legislation. The diocesan Public Policy Committee is advocating for reauthorization of the law, per the recommendation of Sister of St. Joseph Beth LeValley, who works for Congresswoman Louise Slaughter.

The law has been a vital tool for agencies such as FLSNY that provide crisis and support services to migrant workers, said Salgado, who also is a member of the Western New York Human Trafficking Task Force. But another task he has taken on is educating law-enforcement officials so that they do not automatically view migrant workers — who potentially are trafficking victims — as criminals because of their undocumented status.

"(Law enforcement’s) approach to stopping someone or choosing to incarcerate or detain, it’s different … when they’re trained," he said.

Migrants who seek a better life should not be penalized or victimized, Armantrout emphasized. That is why the diocesan Public Policy Committee’s effort to educate the community about trafficking is so important, she said, as is providing local agencies with the resources to aid victims.

"We are all created in the image of God," she added. "It’s startling how much slavery there is in our contemporary culture … and how many more victims — women, children and men — are trapped in this lifestyle."