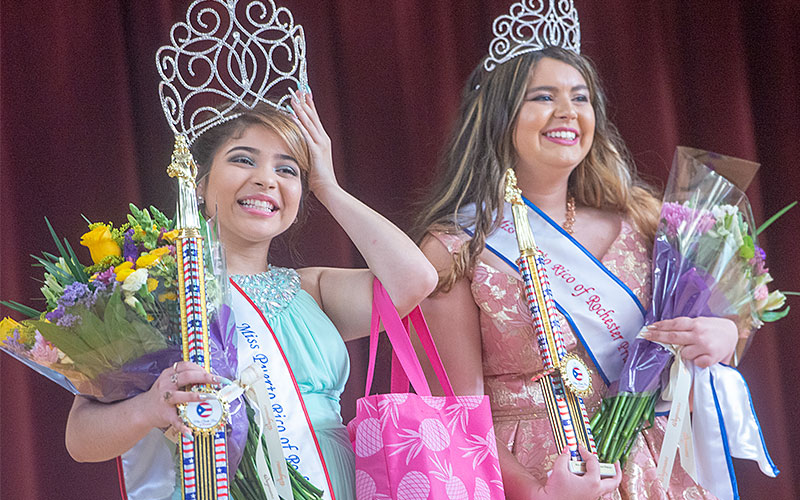 Hosted this year by Ida Pérez, director for Ibero-American Action League’s children and family stability services, the pageant is open to Latina students ages 15 to 17 who are in good academic standing and are at least 50 percent Puerto Rican. The pageant is based on a scale of 100 points; 45 of the points are awarded before the pageant and are based on such personal factors grade-point average.

This year the pageant had four contestants. They were:

• Jadisha Irizarry, a sophomore at James Monroe High School and will be graduating next year. In the future, she hopes to be an art teacher. She represented the town of Maunabo, Puerto Rico.

• Emiliana Martinez-Nobrega, a senior at Our Lady of Mercy School for Young Women in Brighton. She aspires to be a doctor and represented the town of Coamo, Puerto Rico.

• Widalys Robles, a senior at Eugenio Maria de Hostos Charter School. She is an aspiring firefighter who represented the town of Manatí, Puerto Rico.

• Harmonie Shahid Vargas, a senior at the School of the Arts. She hopes to be a medical examiner and represented the town of Ponce, Puerto Rico.

Each contestant was responsible for a cultural performance expressing her Puerto Rican heritage in the form of a song, dance, painting or spoken poem. Additionally, the teens participated in an elegance segment and were required to finish the event by answering a question asked by one of the five judges. Also as part of the pageant process, each contestant over the course of five months was required to participate in a variety of workshops, rehearsals and community activities.

At the end of the pageant, Pérez called three of the four contestants to the front of the stage as she announced the runner-up, Harmonie, who also was the recipient of the Miss Friendly and Miss Photogenic awards.

Martinez-Nobrega was crowned princess and also won awards for Miss Cultural Expression, raising the most funds for the pageant and the $300 Ida Pérez Academic Success Scholarship. Martinez-Nobrega said she will use the scholarship to help pay her tuition at SUNY Geneseo, which she will attend in the fall.

Widalys, last year’s runner-up, was crowned as queen. She also won the award for being recognized by organizers as having made the most progress throughout the pageant training and instruction.

“I am very excited. I am very proud of myself because I made it through. I congratulate everyone who ran, and I am proud of everyone,” Widalys said after being crowned.

The new queen and princess will make their first appearance at the annual Puerto Rican Festival, which will take place Aug. 16-18. (See related story on page 5.)

In addition to performances by the 2019 contestants, the 2018 queen and princess, Elizabeth Medina and Alexis Ortiz, performed together and walked across the stage one last time as part of their farewells.

Since this year marked the 50th anniversary of the pageant, organizers Leslie Rivera and Natalie Rodríguez also resashed 30 past queens and princesses from 1970 to the present.

This is Rivera’s last year organizing the cultural event after five years. Orlando Ortiz, president of the Puerto Rican Parade, made the announcement prior to the crowning and gave a floral arrangement to each organizer.