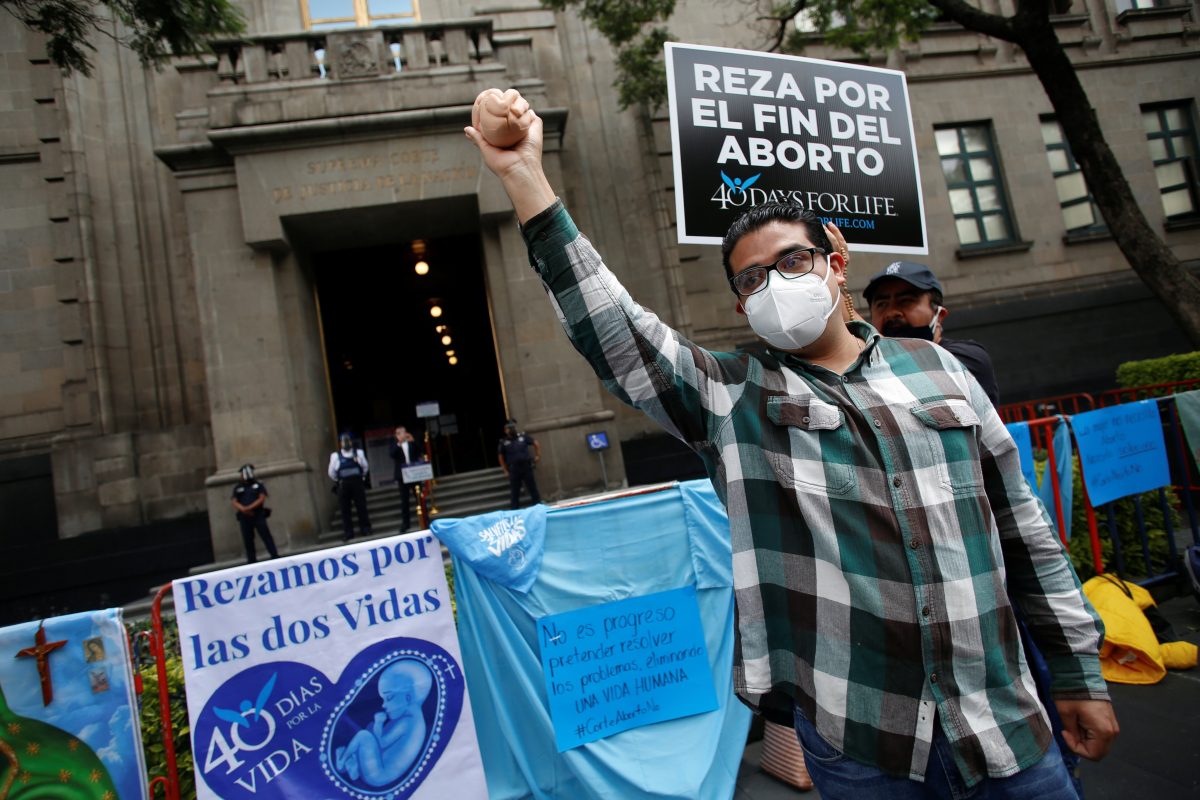 Catholics protest in Mexico City Sept. 7, 2021, after the Mexican Supreme Court's decision that declared the criminalization of abortion is unconstitutional. (CNS photo by Gustavo Graf/Reuters)

MEXICO CITY (CNS) — The Mexican bishops’ conference expressed sorrow over a unanimous Supreme Court decision to decriminalize abortion, while other church leaders called on Catholics to “not to be indifferent” on issues of life.

The court ruled unanimously Sept. 7 to invalidate sections of a law in northern Coahuila state. The law imposed sentences of up to three years in prison for women terminating pregnancies; observers say the court decision sets precedent and will lead to decriminalization across the country. The decision also removed criminal sanctions for abortion providers.

The motion approved in the court, according to Justice Norma Piña Hernández, “concludes there are no public reasons with scientific support that allow equating the embryo with a person with rights.”

She continued, “Prohibiting abortion in these circumstances … implies giving excessive value to the state’s interest in protecting the development of the pregnancy in the face of the intense impact carrying an unwanted pregnancy represents for the autonomy of women when there are not the vital conditions to do so properly.”

After the court decision, the bishops’ conference tweeted, quoting from a conference document published Aug. 12: “Those of us convinced of the value of life have no need for a murderous law such as the one that is being approved … We hope that your option for life is not conditional on an ideology, rather is motivated by faith, hope and love.”

Bishop Jesús José Herrera Quiñonez of Nuevo Casas Grandes, president of the bishops’ life ministry, said in a Sept. 5 statement, “We remember that human dignity and fundamental rights are not a question of votes, rather recognition and respect.”

“We remember that the human being, child of a father and a mother, whose life starts at the moment of conception, must be recognized in their dignity in all steps of life and deserves the same protection of the law in the face of actions that could threaten its integrity.”

The court decision in Mexico, the country with the world’s second-highest number of Catholics, continued a trend in Latin America toward the decriminalization of abortion. Women throughout the region have taken to the streets to protest issues of gender violence and abortion access in recent years.

The court is expected to hear a case during September on the constitutionality of a law from the state of Sinaloa, which protects life from conception.

The Supreme Court ruled Mexico City’s law constitutional based on the state being able to set local health policy, according to Rebeca Ramos, director of the nongovernmental Information Group on Reproductive Choice. This time, she said, the court “got the heart of the matter” and ruled on questions pertaining to the right to access abortion.

“Never again should a woman or a gestating person be criminally prosecuted. Today the threat of prison and the stigma that weighs on people who decide to freely interrupt their pregnancy is banished,” said Justice Luis María Aguilar, whose motion to approve decriminalization was debated in the court.

Mexican President Andrés Manuel López Obrador has not pushed for decriminalizing abortion, saying other issues take priority — though members of his Morena party have approved decriminalization bills since 2019 in the states of Oaxaca, Hidalgo and Veracruz. He declined to give an opinion on the court case at his Sept. 7 news conference.

“We have Supreme Court justices, who are more liberal, (and) a broad and active feminist movement,” said Bárbara González, a political analyst in Monterrey. “The justices want to win points with the people,” she added, but also show independence in the face of accusations of submission to pressure from the president.

Polling on abortion shows a generational divide in Mexico, with a slight majority of people under the age of 50 supporting decriminalization. A poll by the newspaper El Financiero found 53% of Mexicans opposed decriminalization, while 45% were in favor.