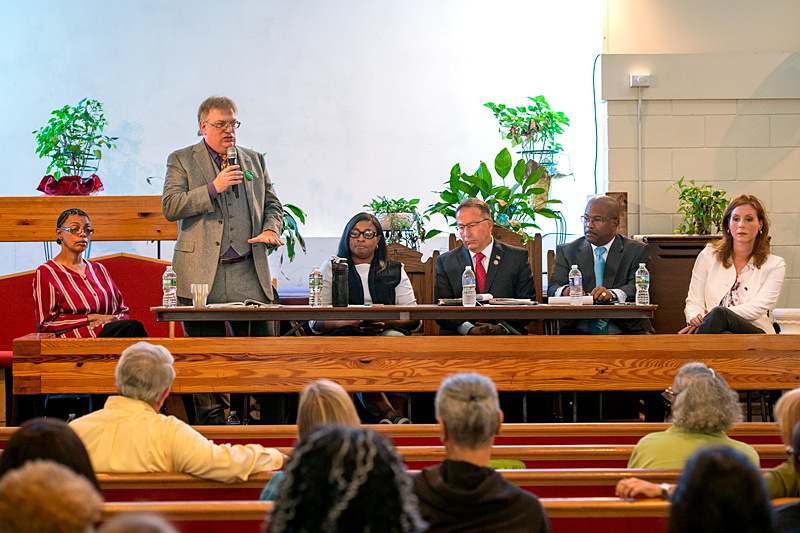 ROCHESTER — Education and the city’s economic outlook were among the topics addressed during a July 20 forum by the six candidates running for mayor of the City of Rochester.

The six candidates are incumbent Mayor Lovely Warren, current county legislator and retired Rochester police chief James Sheppard, and former television journalist Rachel Barnhart, all Democrats; Republican Tony Micciche; Alex White of the Green Party; and Lori Thomas, an independent. Warren, Sheppard and Barnhart will face off in the Democratic primary on Sept. 12, while the others will each have a spot on the November ballot.

The forum was hosted by the United Christian Leadership Ministry at the First Church of God.

During the forum, Barnhart said the city needs to foster job development in city neighborhoods, as less than one-third of residents can get to jobs outside the city within 90 minutes by bus. Additionally, only two-thirds of jobs in the Rochester region are located in places served by buses, she added.

Barnhart asserted that creating a "fiber Internet" network in Rochester — an initiative she envisions funding through a partnership between the city and the Rochester City School District — could attract businesses to provide needed jobs. It would level the educational playing field for the city’s children by providing free Internet access in their homes, she said. She cited a similar, successful model in Chattanooga, Tenn., that could be replicated in Rochester.

"Rochester can do this — we can wire every single home," Barnhart said. "We could put ourselves on the map."

Thomas, a retired teacher, said she plans to address the challenge of transportation by promoting the creation of employee-owned business cooperatives. These cooperatives would provide careers in such industries as technology as well as enable parents to work from home so they would not need to worry about child care. She said she would hold down city spending by putting a cap on administrative salaries, since leaders shouldn’t be making money that would be better spent on the city’s children.

"We must work together as a community to raise ourselves out of the poverty we’ve been ensconced in for decades because of party politics," she said. "If we continue to vote the same way, we’ll have the same results."

White noted that the city gives millions of dollars in tax breaks to developers and funds for projects that many city residents can’t afford.

"The first thing you need to do to solve the problem with poverty is stop giving rich people money," he said.

White also advocated for employee-owned cooperatives that can adapt as technologies changes so that residents aren’t left without job options.

"The economy is changing," he said. "We need to make workers into owners."

Warren noted that Rochester has made strides to improve the economy, as evidenced by the 3 percent drop in the city’s unemployment rate. According to the New York State Labor Department, the rate has dropped from 9 percent to 6 percent in the last three years.

She said she has worked directly with manufacturers to help provide training for the kinds of workers they need and has offered an initiative called Operation Transformation Rochester through which residents learn such "soft skills" as writing resumés and practicing for interviews.

Additionally, she said programs she has brought to City Hall, such as Kiva Rochester, help those who want to be entrepreneurs by giving them access to capital through nontraditional micro loans.

"The best way to help children in our city is to make sure their parents have access to quality, good-paying jobs," Warren said.

Another way to help the city’s children and families is a return to "neighborhood schools" — enrolling children in schools near where they live — so children don’t have to travel across town for school, she said. The school district has begun moving in that direction, with School Nos. 17 and 33 transitioning this fall to enrolling students from nearby neighborhoods instead of busing them in, she said.

Another area of needed improvement in schools is preparing students for real jobs, said Sheppard, who represents the 23rd district (southeast Rochester and part of Brighton) on the Monroe County Legislature.

"There was a time when kids got out of high school and were prepared for jobs," Sheppard said. "Young adults (now) can’t say when they graduate what they’re prepared for. That’s what we need to change."

Sheppard said more programs are needed in schools to train students for jobs in such trades as carpentry, plumbing and heating/cooling. If students have a purpose for going to school, attendance will automatically increase, and graduation rates would likely rise as well, he said. His administration would work with RCSD to replicate and expand existing programs that provide those career pathways, he said.

"That is what the role of the mayor is — to advocate, collaborate and work with the city school district to have programs in place and achieve those goals," he added.

To achieve the goal of improving opportunities for city students, Sheppard and Barnhart support desegregating schools racially and socioeconomically, they said.

While he also would like to see a countywide school district, Sheppard said the area could start with a regional magnet school — a public school that specializes in specific courses or curricula and draws from a diverse geographic area — to set the tone and show the success that is possible.

"Then, people will have the will, the intestinal fortitude to replicate it," he said.

Micciche, a county legislator who represents the 25th district that includes portions of Rochester, Gates and Greece, said fixing Rochester’s schools is the civil rights issue of today.

He said the city could hold in escrow the funds that it is mandated by the state to provide to the school district. When the district could prove it had reached certain benchmarks, such as a minimum 65 percent graduation rate, the funding would continue, he said. He said he also would hire truant officers in every quadrant of the city to address low attendance in city schools.

"What is the biggest motivator? Money," he said. "Why am I going to pay for failure? I’m not."