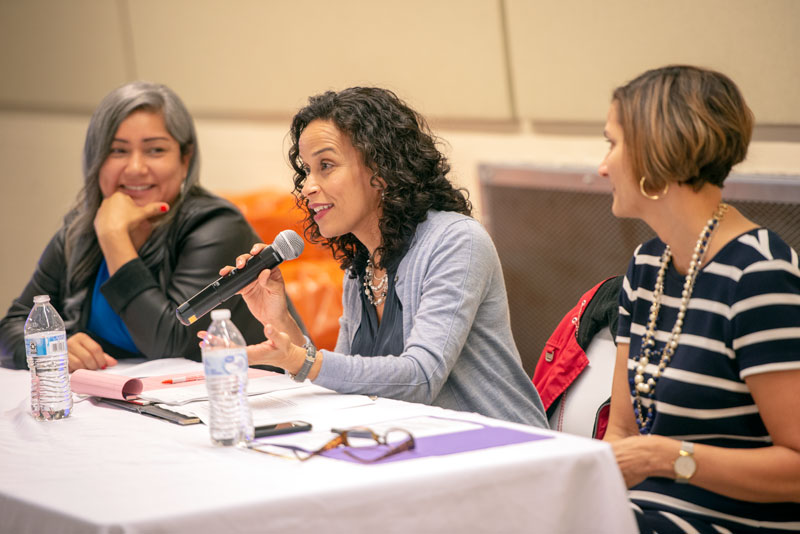 ROCHESTER — Latina women need to “rise up” and demand income equality, as their average salary ranks the lowest compared to other ethnicities and races, say local Latina leaders.

The fourth-annual workshop, which focuses on a different topic every year, was part of the city’s Hispanic Heritage Month events, explained Sylvia Méndez, an event committee member. She said many people are not aware that Latinas made 54 cents on the dollar in 2017 compared to their white, non-Hispanic male counterparts.

“I think it’s a very important topic (that) … we should all take an interest in learning about,” said Méndez, assistant director of the financial aid office at Monroe Community College.

Ortiz said doing research on pay gaps, which apply to a wide variety of occupations, was an eye-opening experience for her. In terms of time, a Hispanic women would have to work one year and 10 months to make the same amount of money that a white, non-Hispanic man would make in a year’s time. That time line is why Latina Equal Pay Day is recognized on Nov. 1, Ortiz added.

This year on Nov. 1, the New York State Council on Women and Girls hosted a panel discussion with women leaders on the pay gap afflicting Latinas in the workplace. Participants explored solutions to expand and extend economic opportunities to all working women, according to information from Gov. Andrew Cuomo’s office.

Also on Nov. 1, a press conference was conducted at Ibero-American Action League in Rochester to raise awareness of pay disparity. Latinas have been at the forefront of the struggle to provide for their families and to provide community leadership but remain underpaid and underrepresented, said Nancy Padilla, one of several current and former elected Latinas who spoke during the press conference.

“We are now bringing our voices together and coming together as a community and saying, ‘Basta ya’ (‘Enough’),” said Padilla, who was the first Hispanic person to win a seat on the Rochester City School District Board of Education in 1981.

One solution would be passage of the Paycheck Fairness Act, which was first introduced in Congress in 1997 but never brought to the floors of the House of Representatives or Senate for a vote, Ortiz noted during the Oct. 11 Rise Up event. The federal legislative proposal, which was submitted for consideration as recently as 2017 by a Washington state Congresswoman Patricia Murray, seeks to close loopholes of the Equal Pay Act (EPA) implemented in 1963, Ortiz explained.

“If this (bill) is never brought to the floor for a vote, this will never happen,” she said. “We have to get it on people’s radar.”

Ortiz outlined the legislative proposal’s key provisions, which include:

• Updating the definition of “work establishment” so an employee who works for a company with multiple locations can compare his/her salary with employees who work at the company’s other area offices.

• Strengthening oversight and enforcement mechanisms, which would allow the federal Department of Labor and other data collection agencies to collect from employers wage data by race, ethnicity and gender.

• Allowing employees to be included in class action lawsuits unless they opt out.

• Boosting remedies in the EPA to deter future violations, such as allowing plaintiffs to recover expenses in legal actions and collect punitive damages from employers.

Increased awareness and pressure on congressional representatives and senators is needed to bring the proposed changes to the EPA up for a vote, Ortiz said.

In addition to advocating for the legislation, women should also be taking the time for self-reflection and consider how often they have asked for a raise or promotion, Ortiz said.

“How many times … have you taken care of your own destiny of where you are in your own workplaces?” she asked. “If you don’t do it, I promise you, no one else is going to do it for you.”

Vilma Patterson, assistant director of student services at MCC, said she learned that lesson the hard way when she was a young mother of three daughters 20 years ago.

She had applied for a position at the college’s counseling office, which required her to move to the downtown campus after working at the Brighton campus for four years. She did ask for more than she was offered and accepted a $500 increase in salary to cover additional parking expenses, Patterson explained.

“I was young and inexperienced,” she said. “I was happy to have the job, so I went with it.”

Five months later, a young man who had just completed his master’s degree was hired at the same salary as Patterson, who had 11 years of experience in higher education, she added.

“This was clearly a pay disparity,” Patterson said.

MCC’s employee unions offer the benefit of a salary equity program, she noted, so an employee can compare salaries with others with the same titles or years of service about every five years.

“I did eventually catch up,” she said. “But as a young mom trying to raise three children on my own, I could have used the money back then.”

Her experience illustrates why Latinas have to be sure to talk to their daughters, nieces and friends so they start out on the right foot, the RISE Up Latina workshop panelists said.

Marcely Pimentel, 16, attended the Oct. 11 workshop after seeing it listed on a Hispanic Heritage Month calendar. The senior at World of Inquiry School No. 58 said she felt motivated to advocate for paycheck fairness and will encourage others to follow the panelists’ words of wisdom to speak up in the workplace.

“That was good advice for me,” she added.