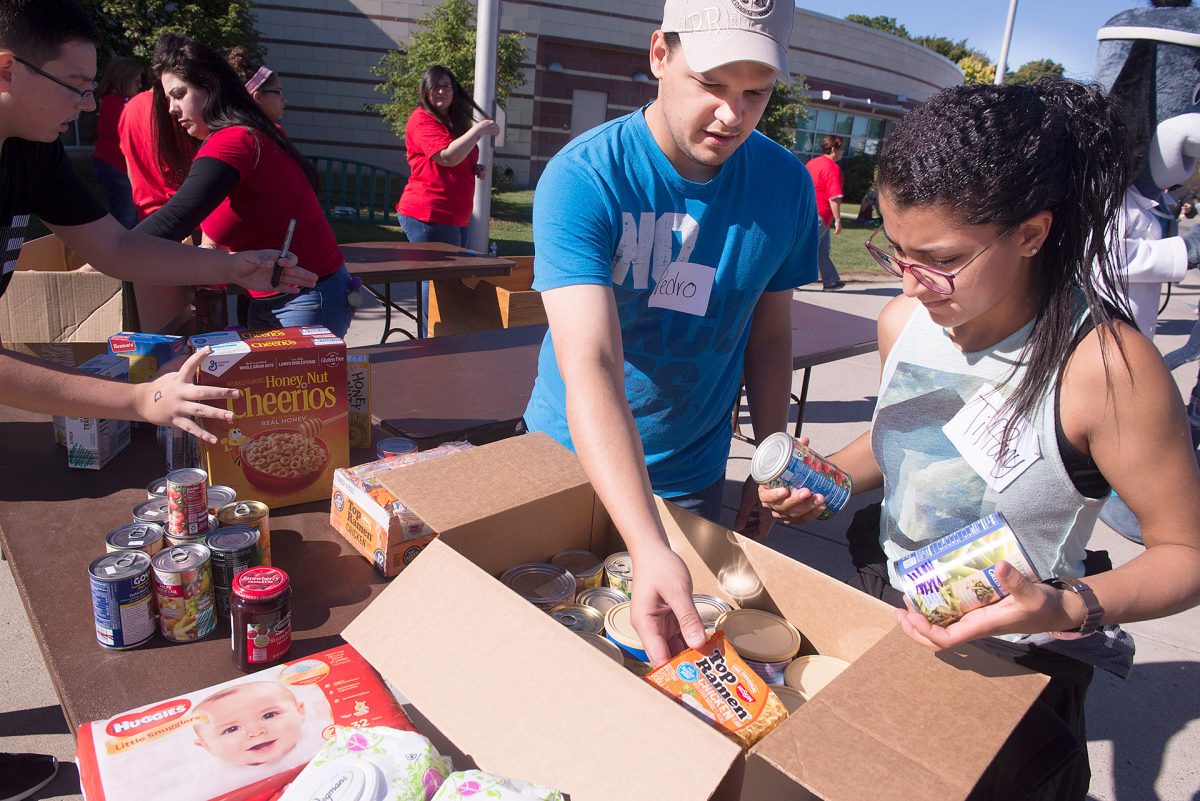 Pedro Centeno and Tiffany Reyes along with other volunteers work to pack boxes of donates item for hurricane relief in Puerto Rico on Oct. 1 at Thomas P. Ryan Center in Rochester during a funraiser.

ROCHESTER — Area organizations and groups are preparing to welcome residents from Puerto Rico who are leaving due to devastation from Hurricane Maria, while money is being raised locally to assist those who have chosen to stay on the island.

Irene Sanchez was the lead organizer for an Oct. 1 “zumbathon” at the Thomas P. Ryan Community Center in Rochester that raised more than $8,500 for hurricane relief efforts. She said not being able to travel to the island after the hurricane was difficult, as her entire family still lives in Puerto Rico. However, two years ago she had started a local group called “Puerto Ricans United in the Distance,” and that network helped her quickly organize the zumbathon, which also collected a large storage container’s worth of food and other necessities, she explained.

“I couldn’t stand on the sidelines and do nothing,” she said of helping Puerto Rico. “I love Rochester. It’s my second home. But my heart always belongs in Puerto Rico.”

It took a long three days for her to connect with her parents and learn that they had survived the hurricane. She usually speaks to her mother every day on her way to work, said Sanchez, who was was close to tears as she spoke.

While she longs to be with family members, she can better serve them from Rochester, she added. She has begun completing online applications on behalf of her family so they can received assistance from the Federal Emergency Management Administration. And her group will continue its efforts to raise money or assist with other benefits, she said.

“Our (work) will keep going until the people of Puerto Rico are doing better,” Sanchez said.

As of early October, most of the island remained without power or Internet service. Until conditions on the island improve, it is likely that many Puerto Rico residents will head to Rochester due to its large Puerto Rican population, noted Rochester city officials. Ray Mayoliz, manager of youth outreach and violence prevention in Rochester, said the city has been discussing the situation with Monroe County social services and such agencies as Ibero-American Action League and PathStone.

“There will be an abundance of goods that people are going to need as they are coming to Rochester either for temporary residency or permanent,” he said. “We are trying to spearhead a relief closet and storage unit for those things.”

The number of residents moving to Rochester could be as low as 200 or as high as 2,000, but Mayoliz said that he already knew of several families who had arrived shortly after the hurricane.

The Rochester City School District also is in the midst of assisting families with children who have already made the move from Puerto Rico to Rochester, and the district also is preparing for the unknown number that may follow, said Carlos Garcia, assistant to the superintendent for communications and community outreach.

“We are looking and preparing for an arbitrary number, thinking approximately 600, if not more, at least initially,” he said.

That kind of influx of students will require more teachers, and potentially more certified bilingual teachers, which they may find in Puerto Rico residents who want to leave the island, Garcia said.

Ibero-American Action League also is in the midst of creating a roster of volunteers to help families overcome language barriers as well as collecting donations to provide them with food, clothes, toiletries and other basic supplies, agency officials said.

Right after the hurricane hit, Ibero took the lead on local fundraising efforts and raised more than $100,000 with the American Red Cross’ Greater Rochester chapter during a daylong telethon Sept. 25. Those funds will assist victims in Puerto Rico as well as victims of the massive Sept. 19 earthquake in Mexico. Following performances of “In the Heights” at Geva Theatre Center, patrons donated more than $70,000 toward hurricane relief efforts through the end of the show’s run on Oct. 8. Several local bands also were to perform during a daylong benefit concert, “Unidos por Puerto Rico,” on Oct. 15 at the Diplomat Banquet Center in Gates.

More than $10,000 in donations and four trucks loaded with supplies were collected during an Oct. 7 event called ROCRelief on an open East Main Street lot known as Parcel 5, said Mayoliz. The Hispanic Heritage Committee of Rochester coordinated the event in collaboration with the Red Cross, PathStone, the Rochester City School District, and the Rochester police and fire departments.

Financial donations collected during ROCRelief were directed to the Red Cross, he said. Donations of water, batteries, flashlights, portable lanterns, diapers, baby wipes and feminine hygiene products were brought to local New York state troopers barracks, who assisted with the collection as part of the Empire State Relief and Recovery Effort for Puerto Rico, Mayoliz said. Those items were going to the U.S. Coast Guard in New York City for transport by ship to the island, he said.

One truck worth of donations, which included clothing from St. Frances Xavier Cabrini Parish’s Matthew’s Closet ministry, went to help the people of Dominica. The Caribbean island southeast of Puerto Rico has not received as much attention even though it was hit by Hurricane Maria as well, explained Mayoliz.

Other nonperishable items collected were taken by a coalition of local churches that raised $9,000 to buy a container to place on a barge for shipment to Puerto Rico, Mayoliz said.

Paul Figueroa-Lippert, a Nazareth College graduate who had recently started a teaching job at Academia Santa Rosa de Lima in Bayamon, said he cried when he heard of all the efforts in Rochester.

Classes resumed Oct. 8, he said through Facebook Messenger. He has been walking an hour to an area that has solar-powered electricity to charge his phone and sit in air-conditioning for respite from the heat.

“We started classes … without water, electricity, textbooks or even a chalkboard,” he said.

He has been writing updates on his Facebook page about what his students endured during the hurricane. Four of his coworkers lost everything, he added.

Figueroa-Lippert said he rode out the storm in the third-floor apartment of a friend. The winds and rain were so strong that he and his friend took off the doors and windows to prevent injury and endured the conditions for 48 hours.

Shortly upon returning to his first-floor apartment, it was flooded after the roof on the house fell in from the weight of water, Lippert-Figueroa said.

His focus now is to help raise money through a group of six churches near San Juan to provide aid to the community there, he said. And he created a GoFundMe page to help his school.

“Everyone has been sharing food, cooking together, playing dominoes together, and drinking together in the streets as one big community,” he said. “I have never been so proud to be Puerto Rican.”

Editor’s Note:  Financial donations are still being accepted by the Red Cross and Ibero, which is collecting such items as toiletries, canned goods and water at all of its locations. For more information, call Ibero at 585-256-8900 or e-mail information@iaal.org.