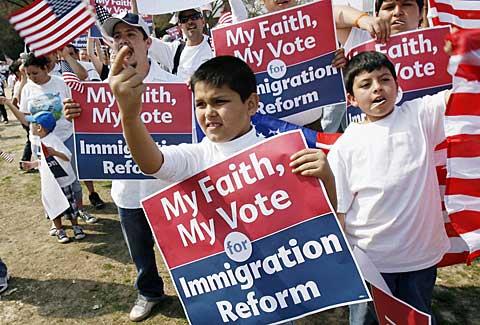 Local activists accompanied farmworkers from the Rochester area as they traveled to Washington, D.C., to join with the estimated 200,000 people who marched on the National Mall March 21 to demand immigration reform.

Although Ami Kadar of Centro Independiente de Trabajadores Agricolas (CITA) said that the trip was incredible, although she felt the event was overshadowed by Congress’ passage of a health-care bill that day. Kadar said that she did appreciate the videotaped message from President Barack Obama that was shown during the massive moblilzation.

"There was an amazing energy," Kadar said of the march. "Everyone was so excited."

Kadar rode down on one of two buses that comprised farmworkers and advocates from Rochester and Buffalo. Kadar noted that she was one of only five nonfarmworkers on her bus that carried 75 people to Washington.

When they returned from the trip, Kadar said that the group immediately talked about its next steps including making calls to push for passage of the legislation expected to be introduced by New York Sen. Charles Schumer and South Carolina Sen. Lindsey Graham.

"They’re ready to help and work for it," Kadar said of the farmworkers who made the trek.

The senators released a framework for reform legislation in an opinion piece that appeared March 19 in The Washington Post( www.washingtonpost.com/wp-dyn/content/article/2010/03/17/AR2010031703115.html).

In the essay, the senators acknowledged that the U.S. immigration system is in urgent need of reform. They noted that the system burdens employers with a complicated system of worker verification and that the government is unable to track the millions of valid visas that are issued.

"Our plan has four pillars: requiring biometric Social Security cards to ensure that illegal workers cannot get jobs; fulfilling and strengthening our commitments on border security and interior enforcement; creating a process for admitting temporary workers; and implementing a tough but fair path to legalization for those already here," the senators wrote.

In a statement at www.whitehouse.gov/the-press-office/statement-president-praising-bipartisan-immigration-reform-framework, President Obama praised the two senators’ bipartisan framework for addressing border security and accountability from workers and employers.