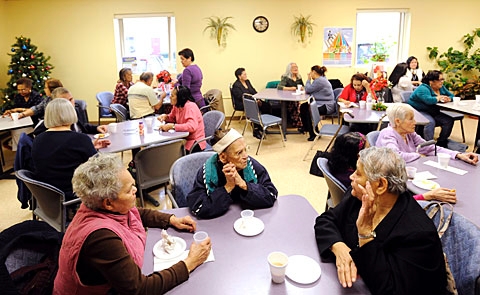 ROCHESTER — Three local agencies have teamed up to help Latino families talk about their end-of-life wishes.

The initiative by Ibero-American Action League, Excellus and The Community Place of Greater Rochester seeks not only to educate Latinos about the importance of discussing end-of-life wishes, but also to ensure that they have written advance directives and designated health-care proxies. Advance directives give patients a say in decisions regarding their medical treatment, even if they are too sick to make those decisions themselves. A health-care proxy is a trusted person appointed to make health-care decisions on an individual’s behalf in the event the individual becomes incapacitated.

The agencies announced the community effort during a health fair for senior citizens — many of them from Ibero’s Centro de Oro — at The Community Place on Parsells Avenue.

Such an outreach is necessary because Latinos generally don’t plan ahead for these decisions and instead put them off, explained Elisa DeJesus, vice president of Ibero’s family-services division.

"Our goal is to raise awareness of advanced-care planning," she added. "So that they can eventually make their own decisions … when that time comes in their lives."

As a women of faith, DeJesus said that she also knows some Latinos feel that they don’t need to have these conversations because of their religious beliefs.

"We have a saying, ‘Que sea lo que Dios quiere’ (God will take care of everything) … including death and dying," she remarked. "But there has to be action as well. Yes, God takes care of everything but we have to move."

The initiative also will include outreach into the faith community, which, as DeJesus noted, plays an important role in the lives of many Latinos locally and nationally, added Dr. Patricia Bomba, Excellus’s vice president and medical director of geriatrics.

"One thing we do know is many individuals really do rely on their faith," she said.

Excellus will provide in-kind support and bilingual educational materials, Bomba explained. Training for agency staff and volunteers who work with older adults also will be provided, she added.

"They will lead by example and expand out to the community," she said.

Materials also will be translated into Russian, as Russians represent another large group that comes to The Community Place, said Katy Allen, director of the organization’s aging-services department.

Providing such translation for older adults is "important in removing barriers by providing information in their own language and culture," she added.

Another essential strategy to spread the word is face-to-face contact, DeJesus explained. That is why Ibero staff members will speak on a small-group basis with the 200 seniors currently enrolled at Centro de Oro and ensure the educational materials reach family members.

"We find that to be most efficient," she said.

Reaching as many families as possible is an important goal for this initiative because end-of-life decisions can affect a person at any stage in life, not just when a person is older, Bomba noted. Outreach programs also are necessary for the entire community because a 2008 Excellus survey revealed that only one in nine Rochester adults indicated that they felt a health-care proxy is important and only half had designated a proxy, she added.

Bomba noted that these decisions should involve the entire family — which is what her own mother did when she was at the end of her life — so the burden doesn’t fall on just one person.

"Anyone can face a life-threatening situation," she said.

Spreading the word will be made easier for staff and volunteers at Ibero and The Community Place because of the bonds they develop with the participants and their families, Allen said.

"We’re family to them," she added. "If we come to them with this information, they know it’s important."

Manuela Padilla already knew about the importance of a proxy and has designated her two daughters as such after the death of her husband in 1993. She moved to Rochester from the Buffalo area five years ago.

"I’m not married," she said. "That is why I talk to my daughters (about this) because you never know what will happen from one day to the next. … And they have to look out for me."

Juan Laza, a Puerto Rico native who lived three decades in New York City before moving to Rochester 11 years ago, said that he didn’t know much about advanced-care directives or choosing a proxy but agreed it’s a good idea.

Death … we don’t know when it will arrive," he added. "You make those plans to help each other out."