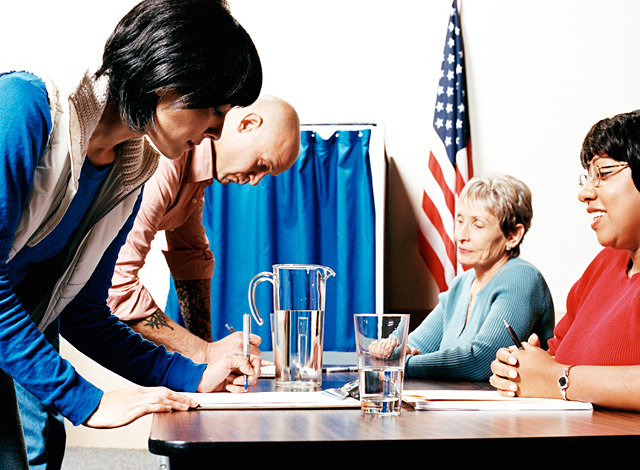 The power of the Latino vote is often referred to as "the sleeping giant."

"There is a lot of talk about how politics will change when nonwhite voters represent the majority of the voting population, with a great deal of focus on the importance of Latinos as the largest nonwhite population," noted Kiku Huckle, a research fellow at the University of Washington. "Unfortunately, less than half (of potential voters) actually turn out to vote. The result is that Latinos are not having the dramatic impact on national elections that they could."

While a report from the Pew Research Center (http://pewrsr.ch/1qAAY5w) found that the economy is the most important issue for Hispanics, followed by immigration, Huckle added that Hispanics are not exercising their political power in order to ensure that their own needs are met and their policy preferences are acknowledged or responded to. She is working on a dissertation at the University of Notre Dame’s Institute of Latino Studies.

There are several reasons why Latinos don’t vote, including a lack of information about candidates and bills they will be voting on; voter identification laws in states with large Latino populations, including Florida and Texas; and lack of awareness about early voting and using absentee ballots, she explained. And that lack of civic engagement persists, even as the Latino population trails the non-Hispanic white population in terms of economic well-being in such areas as employment, income level and wealth accumulation, according to the congressional report.

Anthony Plonczynski, a local Democrat party campaign manager, said he knows anecdotally why more Latinos don’t vote. In their native countries, elections are a big deal for many Latinos and almost take on a festive atmosphere. But in the United States, it is more a passive experience, he said.

Additionally, the Latino community is stricken by higher rates of poverty, which means people are more transient and don’t put down roots and are less invested in election outcomes, Plonczynski said.

And that lack of participation creates a vicious cycle. American campaigns revolve around spending money to target voters, Plonczynski said. But if a potential voter hasn’t participated in the last two or three election cycles, campaigns may stop focusing on those voters and increase their alienation, he explained.

"It’s a double whammy," Plonczynski said. "If you’re disengaged, the political establishment disengages with you. And yet, it’s a demographic that is hugely important and growing."

"(Latinos) are not mobilized in the same way other populations are," she said. "The reason for this is simple. Mobilization and ‘Get Out The Vote’ campaigns are expensive to run, and so they often target ‘likely’ voters in order to generate the greatest impact for their dollars. This means that unlikely voters are not mobilized, and subsequently continue to turn out less."

Political candidates, whether national, state or local, need to do a better job of creating an infrastructure that will reach Latino voters, Plonczynski said, as President George W. Bush did with Florida’s Hispanic voters and President Barack Obama did with Hispanic voters across the country during both of his campaigns. And with the number of eligible Latino voters expected to jump from a record 24 million in 2012 to 27 million in 2016 as more U.S.-born Hispanics turn 18, according to the Pew Research Center, their potential to have a great impact on the 2016 election increases as well.

Through a series of civic engagement workshops this past summer (http://bit.ly/1Or2XoL) Plonczynski and other members of the local ad-hoc think tank La Cumbre have tried to engage more Latinos in Rochester on the importance of political participation. La Cumbre is focused on creating change in four key areas: economic development, education, arts, and culture and government relations.

"We have to find our voice locally," he said. "I don’t believe we have. As many leaders as we’ve had locally … Latinos locally have to bring together a broad-based coalition to be effective."

Locally and nationally, more Latinos also need to run for public office, even though voter apathy plagued the campaigns of the only area two Latinos who ran for political office this year, Plonczynski added.

"You can’t win a race you never run," he said. "We need a better mobilization effort."

The Catholic Church can lead such efforts, noted Huckle, whose dissertation is focusing on how the church can respond to the diverse needs of its congregations.

"There is a great deal of anecdotal evidence that the Catholic Church is one of the most effective institutions in both providing political information and mobilizing Latinos to political action," she added. "Many theorize this is because many Latinos are Catholic and so trust the church as a source of information; others say it is because of the church’s familiarity."

"All community organizations (need) to work to educate Latinos, and all community members for that matter, on the importance of voting and making one’s voice heard, on opportunities to participate politically in elections and other community or civic engagements, and to be very direct and strong about facilitating that participation as well," she added.

Plonczynski said La Cumbre plans to continue its efforts and will go out to groups that request information, whether that is at a church or other organization.

There also is hope for the power of the Latino vote among Hispanic millennials, who are proving to be more engaged in political issues, noted Huckle and Plonczynski. The young people advocating for passage of the DREAM Act, for example, are leading the way. The bipartisan legislation would provide a path to citizenship through a college education or military service for immigrant youths who were brought to this country at an early age, according to http://dreamact.info.

"Dreamers represent a very small portion of the young Latino population, but I believe the example they set is encouraging," Huckle said. "If they turn into community leaders who work to mobilize Latino populations, particularly when and where other groups are failing to do so, there is potential for great positive outcomes."