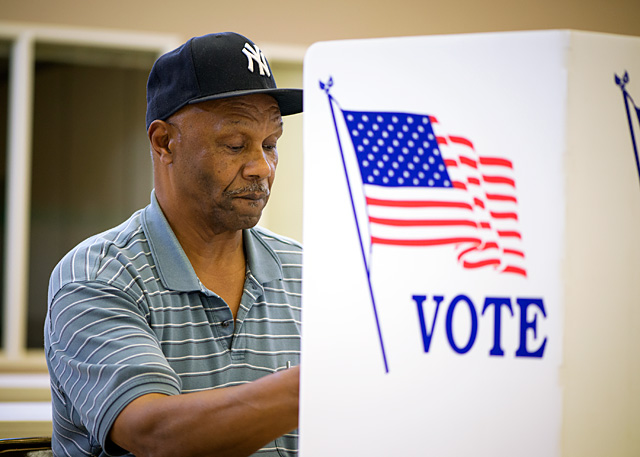 While the presidential race didn’t garner as many votes from Latinos for the Democratic Party as had been expected, local and national officials generally are encouraged by increases in voter participation.

More than 13 million Latinos voted on Nov. 8 — representing a 17 percent increase in the number of Latino voters since 2012, according to the League of United Latin American Citizens, one of the oldest Hispanic organizations in the country (http://bit.ly/2fUSIyY). Latino voters were key to electing the first Latina for the U.S. Senate, Catherine Cortez Masto of Nevada, LULAC notes.

Since 2012, the total number of registered Latino voters in the United States has risen by 4 million to more than 26 million people, Dorian Caal, director of civic engagement research for the National Association of Latino Elected Officials, told El Mensajero Católico on Nov. 8.

According to exit poll reports at cnn.com, the Democratic Party failed to turn out a greater percentage of Latino voters, who traditionally vote Democrat. In states like Texas and Florida, Latino voters constitute 28 percent and 18 percent of all eligible voters, respectively, according to the Pew Research Center (http://pewrsr.ch/1yL2O72). Republican Donald Trump won both of those states, garnering 31 percent of the Latino vote in Florida and 10 percent in Texas, according to information from Latino Decisions (latinodecisions.com), a political research organization.

The key takeaway from the 2016 presidential election is "You can’t take any group for granted," including Latinos and African-Americans, whom party leaders assumed would support Clinton, he said.

Yet it remains to be seen what Clinton’s loss will mean for Hispanics in terms of immigration and such economic issues as minimum wage and health care.

"There are a lot of question marks out there," Plonczynski said. "Governing and running an election are two different things. People, when their vested interests are at play, are going to protect those interests. So we’ll see. You have to get through Congress to get things passed. The election will have consequences (especially) with a mid-term election coming forward."

Increases in voter registration and election turnout among Latinos demonstrate that Hispanics are sending a message to politicians at the local and national levels, , said Peter Vázquez, a Republican who lost in a primary this fall for a New York State Assembly seat.

Part of that message is that parties are becoming less relevant to average Americans, Vázquez said. He noted, for example, that in conversations he had with people during his campaign that many didn’t truly understand that political terms like leaning left or right refer to holding liberal or conservative principles.

"But, also … the Hispanic community is as American as everyone else with the resources, knowledge and courage to compete and hold (candidates) accountable," he said he found out during his campaign.

Registering to vote is crucial to any effort to hold politicians accountable, which is why the Democratic Party locally was so diligent in its outreach to get voters registered, Plonczynski said. In Monroe County, the number of registered Latino voters rose about 6 percent from 1,700 voters four years ago to 2,600 this year, and local observers saw this as a sign they would play a major role in the national races, he said. Voters in the city of Rochester made up a large share of the increase because of the overall larger Latino population that lives there, he noted.

But Latino voter growth has been seen across the county.

"We are growing everywhere," he said, while registration drives were concentrated in the city. "Can we say that we attribute that to voter outreach? Maybe or maybe not. We did have more public service announcements and more registration events."

Increased awareness of the political process due to the presidential election, he said, also was a big factor in increased voter registration, Plonczynski acknowledged.

Local Latinos also have become more engaged in the political process and their membership in the Democratic Party has grown by a third, he added. The growing influence of Latino voters also has led to a Latina heading up a committee district that represents the Corn Hill area that previously had been an African-American stronghold, he said.

Local outreach to Hispanic voters by the Republic Party, though, has been lacking, Vázquez said.

"This I believe is the result of poor leadership and little to no outreach into the Hispanic or black community," he said.

Perhaps due to local and national focus on the Latino vote this year, registered Latino households in apartment complexes on North Clinton Avenue and St. Paul Street received prerecorded phone calls — known as "robo-calls" — with misinformation about Election Day. According to officials of the local Democratic Party, the calls told Latino voters that they didn’t have to go out and vote because there would be no election on Nov. 8.

Plonczynski said the party was not able to determine who was behind the calls prior to the election, but in response to the misinformation the party made a significant effort to provide correct information as well as offered rides to polling places.

"I imagine this (incident) is because of the significance of the Latino vote this year," he said.

Now that the presidential race is over, organizations like the National Association for Latino Elected Officials must work to ensure Latinos remain engaged in upcoming elections, especially local ones, Caal said.

"Every election is important," he said. "Local elections are even more important because they directly affect our day-to-day lives."