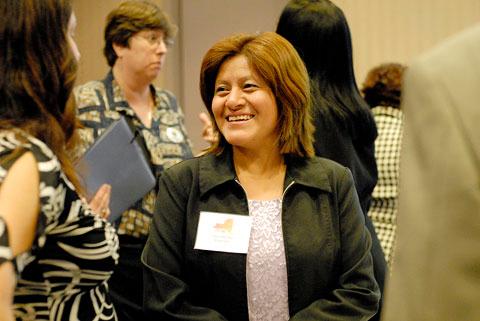 SYRACUSE — Momentum continues to grow for the positive changes participants of the annual Latino Upstate Summit are trying to foster in their communities.

"People get energized and invigorated," said Rita Paníagua, executive director of the Spanish Action League that served as the host agency for the third-annual summit held Oct. 23 at Syracuse’s OnCenter Complex.

Paníagua cited Gov. David Paterson’s keynote address during the summit as an example of the event’s continued growth. Paterson spoke of the need to make sacrifices to help New York survive its current financial crisis.

Latia Curry, director of special projects for the governor’s communications office, said that Paterson chose to participate in the summit because "he believes in ensuring that all voices are heard."

"I enlist your support," Gov. Paterson said at the summit, referring to his proposed two-year deficit-reduction budget plan that includes $500 million in agency spending cuts. "We have divided the pain equally. We have created a shared sacrifice."

The governor also pointed out that in spite of the recession, the state has continued to create opportunities for minority and women-owned businesses. The state also has created a Hate Crimes Task Force to protect minorities, immigrants and vulnerable groups, Curry noted.

"Now, we have fair policies in place rather than what came before it," he said to applause from the crowd.

Additionally, Paterson said that state Secretary of State Lorraine Cortés-Vázquez, who also attended the summit, is overseeing a task force to ensure state agencies are tapping qualified Hispanics for jobs.

Cortés-Vázquez said that the summit represents an opportunity for Latinos to make their voices heard in regard to the unique challenges facing upstate, such as the need for more economic development. Additionally, summit participants can work toward unity with downstate Latinos who have traditionally represented a stronghold in Hispanic leadership.

"We have brothers and sisters who need our voice," she said. "This strengthens us as a state, as a Latino voice."

The summit strives to arm Latino leaders with ideas and information they can bring back to their own communities, Paníagua said. About 240 people attended this year’s summit, which included workshops on such topics as education, immigration, health care, workforce development and youth issues. Many staff members from Rochester’s Ibero-American Action League, which hosted last year’s summit, and other Rochester community leaders also attended.

Paníagua said that this month she will pass the baton to community leaders in the City of Amsterdam as planning begins for next year’s summit, which will include discussion of all the ideas presented and discussed in Syracuse.

Those ideas included making high-school graduation for Latinos non-negotiable. That was the theme of the summit’s education workshop that included presentations from Syracuse City Schools Superintendent Daniel Lowengard and Margarita Reyes of Rochester, who is president of the New York State Association for Bilingual Education.

Lowengard explained Syracuse’s "Say Yes to College" initiative, which offers full scholarships at state colleges and 23 private colleges to students who graduate from any of its high schools. About $4 million has been raised thus far for these scholarships, Lowengard said, noting that the bigger expense is providing the necessary supports in high school.

"We’ve set our sights higher for our kids," he said. "A high-school graduation is just a step to another step."

By removing the pressure of paying for college, the hope is that students can focus on being prepared not only to graduate but to stay in college, Lowengard said. That preparation may result in a longer school year and longer school days for students.

"It can’t be a choice," he said of students’ academic success. "It has to be part of the culture. … Students have to be engaged."

Workshop participants noted that a student will likely not be engaged if he or she isn’t allowed to learn English and take other classes in the native language so they don’t fall behind. This practice is common in some districts, as is evident by research on bilingual-education programs conducted by the State University of New York at Albany. The report is available at www.nylarnet.org/reports/edu_BilingualEducation.pdf.

Ildefonso Correas Apelanz of Argentina noted that "these kids are never going to get out of where they are at" if they can’t keep up with such core subjects as math and science in their native languages.

"They’re going to have a hard time," she said.

Reyes said that an informal survey she conducted of adults and high-school students in Rochester also shows that a majority of the students questioned, many of who are in bilingual programs, feel a lack of support and motivation.

"We need to provide individual help and emotional support," Reyes said. "One size does not fit all."

That same idea applies to immigrants when it comes to enforcement and treatment of Hispanic migrant workers who come to work in this area’s farms and factories, said Pat Rector of Syracuse’s Upstate New York Detention Task Force. During the summit’s sessions on immigration, she also offered suggestions for being in solidarity with migrant workers.

"Just as with the abolitionist (movement), people are needed to bring courage to this movement," she said. "These people are not criminals. We’ve criminalized them. … The tragedy of 9-11 is distorted and misused to harm brown people all over the world."