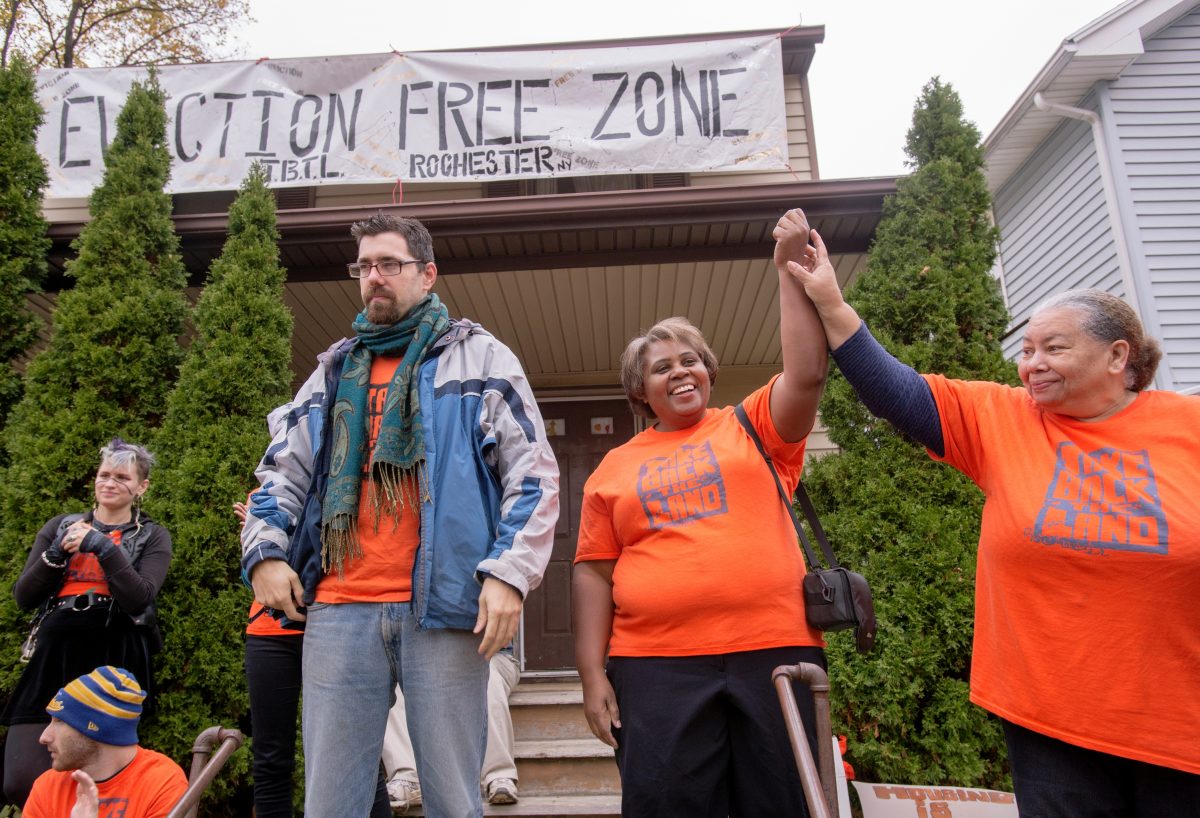 Take Back the Land organizer Ryan Acuff (left) stands with homeowner Elizabeth McGriff during the Nov. 10, 2015. rally against McGriffs eviction from her home.

ROCHESTER — One aspect of housing justice for city residents is to protect lower-income homeowners from foreclosures, which have a negative effect on neighborhoods, said Joe DiFiore, board president for the City Roots Community Land Trust.

A land trust is a form of community-led housing, owned and operated by residents or a nonprofit organization to develop and manage homes or other assets, according to information at www.cityrootsclt.org.

City Roots Community Land Trust was formed about two years ago in response to a foreclosure crisis faced by Liz McGriff, a city resident who is a City Roots board member. With the assistance of mediation arranged by the land trust, McGriff was able to negotiate with the bank holding the mortgage to her house in the city’s Beechwood neighborhood, DiFiore said.

She will repurchase the home with financing from a combination of grants from City Roots, St. Joseph’s House of Hospitality, and McGriff’s own funds and loans. City Roots also purchased the land on which the house sits to ensure the property remains affordable in perpetuity, DiFiore said. The arrangement with McGriff ensures she remains in her home and the house remains affordable for any future owners, he added.

“For all intents and purposes, it will be Liz’s house; she will have control, maintain it and pay taxes,” DiFiore said. “If she chooses to sell it (in the future), it will be sold at an affordable price.”

Having arrangements like the Rochester model worked well during the mortgage crisis of 2007-09 that hit other areas of the country, as homes that were part of land trusts were 10 times less likely to go into foreclosure, he added. There are about 225 land trusts of this kind across the country, DiFiore said.

The largest is Champlain Housing Trust in Burlington, Vt., which was founded in 1984 and oversees more than 200 homes and manages apartment buildings for low-income families, according to information at getahome.org.

“The land trust comes into play as a support system,” DiFiore said. “We can get stopgap funding and connect (a homeowner) with legal services. With a land trust, you have an organization that has a vested interest in seeing you succeed and get back on track.”

McGriff’s story is a victory for her and the community at large, he added, noting that it represents a grassroots effort of community members finding solutions to help others who need those solutions most, he added.

Since they have similar goals of keeping families in their homes, members of City Roots and the newly formed City-Wide Tenants Union will work together to advocate and provide support for city residents, DiFiore added. For example, if the city enacted “just-cause eviction” protection that would prevent a landlord from arbitrary evictions, a tenant also would have first right of purchase on a house if a landlord is facing foreclosure, DiFiore said. Or, if a tenant’s home is going to be sold at auction due to a landlord not paying taxes, the tenant would have the option to pay the taxes owed to avoid eviction, he said. The land trust could step in and help raise funds to help tenants in both situations, DiFiore noted.

“The ultimate mission is about community control (of housing) and permanent affordability.” of housing options for city residents, he said.