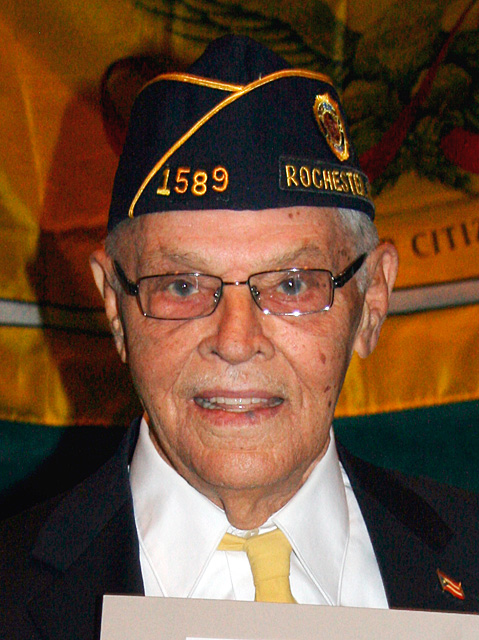 Mr. Burgos was born Nov. 10, 1922, in Aibonito, Puerto Rico, and was one of 11 children, according to information from his daughter, Vilma Burgos.

Just weeks before turning 18, he enlisted in the U.S. Army and served with the 65th Infantry for six years, said his son, Roberto Burgos. His father’s service was an eye-opening experience in many ways, he added.

After his Puerto Rican contingent trained in Panama, Mr. Burgos encountered racism for the first time when stationed in New Orleans. His good friend, who happened to have darker skin, was not allowed on a bus meant for "whites only," Burgos said.

"He refused to get on the bus if his friend couldn’t get on the bus," said Roberto Burgos. "They left and he expressed that it was wrong … but they were there to do a job and that didn’t stop them from doing what they have to do."

Soon after the incident, they were headed to World War II’s European Theater. Mr. Burgos served stints in North Africa, Italy and France before being stationed in Germany where he served as a scout on the front lines, explained Roberto Burgos. Post-occupation, he continued his service for another three years and got to know German people well, his son added. Mr. Burgos even learned to speak German fluently.

"Before war was declared, Germany was the enemy and he went to fight the Germans," his son said. "After the war, he was part of the occupation troops, and he became the peacemaker. He wanted to make friends with the Germans. He went out of his way to meet German civilians. … And he walked away with a better understanding of what the war was about."

Following the war, he opened the first grocery store in Asomante, Puerto Rico, where he met his future wife, Liduvina Bonilla-Santiago, stated Vilma Burgos. They were married 66 years.

Mr. Burgos moved his family to Rochester in 1954 and began working alongside his brother, Victor, at a bakery on Joseph Avenue for a few years. Through that job, he made friends with two local elected officials and obtained a job at the city’s parks and recreation department in 1959, his son said.

He worked there for 27 years and moved up the ranks to crew chief, even though he had refused to take the civil service exams, said Roberto Burgos. Eventually, his supervisors decided to give him an oral exam, which he passed and finally received the promotion he had sought, his son added.

"He worked circles around everybody," Roberto Burgos said. "When he came home and said, ‘They finally promoted me based on what I know and demonstrated,’ we were all very proud of him."

His father also felt proud that two of his sons ended up working for City Hall. Luis Burgos was even sworn in as commissioner of parks and recreation on his father’s birthday — 50 years after Mr. Burgos became the first Hispanic to work for that department, said Vilma Burgos, who works with her brother, Alfred, at the business he owns and operates, Burgos Income Tax Inc.

Mr. Burgos also had a few side jobs to afford caring for his seven children and a nephew he had adopted at a young age, noted Roberto Burgos. Through his connections, he also helped his children get jobs, and Roberto Burgos worked alongside his dad after school at age 17 cleaning office buildings.

That job allowed him to buy a Mustang, with his father cosigning the load, he added.

"He taught us there was no shame of work, regardless of what it was, clearing floors, mopping, you’re working," said Roberto Burgos, "You’re making a living. It was manual work, hard work, but that was OK."

Through his many different friends, Mr. Burgos also taught his children through his actions, not words, to judge people only on their character.

"We all grew up like that, feeling comfortable with all kinds of people. That was a great value he imparted to all his children," said Roberto Burgos. "We never talk about it but we all have this great diversity of dear friends from all walks of life."

Following retirement in 1986, his father bought a new pick-up truck and continued helping family and friends whenever needed for many years, said Roberto Burgos. Two years ago, he was diagnosed with Parkinson’s.

"He was a fighter until the end, a survivor," Roberto Burgos remarked. "He did the best with what he had to work with in terms of his social status, economic status, circumstances of life. Wherever he found himself, he tried to do the best he could."

Mr. Burgos was predeceased by a nephew, Jose R. Burgos. He is survived by his wife; daughters and son-in-law, Vilma and Cathy and Rick Rivera; and sons and daughters-in-law, J. Roberto and Sonia Burgos, Victor and Gladys Burgos, Alfred and Ana Burgos, Edwin "Chu" Burgos and Luis Burgos; 17 grandchildren; and 36 great-grandchildren.

Donations in Mr. Burgos’ memory may be made to the Veterans Outreach Center, 459 South Ave., Rochester, NY 14620.