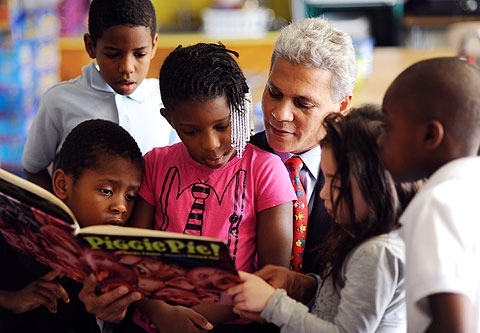 ROCHESTER — Bolgen Vargas has been named the next superintendent of the Rochester City School District.

The school board voted 6-1 in favor of Vargas, who served on an interim basis for the past year. Board members cited his diplomacy, his humility, his ability to work with all kinds of groups within and outside of the district and his knowledge of the needs of urban students as some of the reasons for his selection. The decision was met with applause from many of those in attendance for the April 26 board meeting.

"He’s not only a visionary, he’s great at executing," said board member Melisza Campos. "And he is child focused."

Critics, some of who tried to prevent Vargas from speaking during a public forum held earlier in April, say that he lacks teaching and administrative experience and that the search process was flawed.

"The process lacked integrity," said Cynthia Middleton, a mother of three students in the district. "Our tax dollars went down the drain because the decision had already been made."

Emeterio "Pete" Otero said that he takes issue with that claim as a member of the superintendent selection committee. He explained that he personally spent 40 to 50 hours in public forums listening to parents as well as reading and responding to the many e-mails he received during the search process.

"I thought it was a fairly clear and transparent process … and the community was engaged and involved," Otero remarked.

He said that the search produced four candidates, and Otero said that he would have been comfortable with any of the four being selected as superintendent. Prior to a public forum held at East High School last month with candidates, two opted out and the board was left with two choices: Vargas and Andre Spencer, a Houston schools administrator.

"Was it a perfect process? No, but it was very solid," Otero added.

Now that the search is complete, he said that the board can take the opportunity to evaluate the process and its own guidelines for the future.

The biggest problem that board member Van Henri White had with the process is that the board changed its own guidelines midstream, he explained during the April 26 meeting. White voted against Vargas’ selection, noting that his vote had nothing to do with Vargas’ credentials or commitment.

He said that the board initially announced that accepting the interim position meant not applying for the job. When the board changed its mind during the search process to allow Vargas to apply, at least one candidate chose not to go for the job, White said.

By changing the rules this way, the board did not adhere to the district’s own values policy to give all individuals equal access to all available opportunities, he said. The board also failed in its goal to provide equal application of procedure, White added.

"We did not model the appropriate behavior expected of our students and our staff," he said.

The fact that Vargas served as interim, however, gave the entire community the opportunity to observe his strengths and weaknesses, noted Otero.

"What we got was a body of work," he added. "And It could’ve gone either way, but he demonstrated he has the skill sets."

School board member José Cruz said that because of all the community meetings held by the board and the 21-member selection committee, he disputes the criticisms that the process wasn’t open or thorough enough.

"I don’t know how much more transparent we could have been," he said.

Vargas said that he sometimes wonders if all community members realize that the superintendent’s job is really about the children. For him, the children are his main motivation, he noted.

"The Rochester City School District has the ultimate responsibility for the education of our kids but that responsibility starts with me," he said. "I promise each one of you that (the children) are my motivation to lead. … But I can’t do it alone."

His own life experience is based on the value of public education, said Vargas, who moved to New York City from the Dominican Republic as a high-school student without knowing a word of English. He credits his family and teachers for helping him graduate from high school and go on to receive a bachelor’s degree in international studies and a master’s degree in school counseling from SUNY Brockport.

"What education can do for the individual and the community came from this experience," as an immigrant student, he remarked.

Vargas also earned a doctorate in educational leadership and organization from the University of Pennsylvania. His dissertation focused on students who succeed in the face of adversity.

That level of knowledge — especially about the unique challenges facing Latino and African-American students — coupled with his experience as a city school board member will serve him well in his new job, said Mildred Vázquez, a longtime friend and former executive director of the Puerto Rican Youth Development and Resource Center. He also is adept at forging partnerships and will likely assemble a strong team around him, she added.

Vargas served on the board from 1996 to 2003 and was board president for four of those years, according to district officials. Prior to coming to the district, he worked as a guidance counselor for more than 20 years.

"He knows the community and he knows what resources are in the community," Vázquez said. "He will bring in others to do this (work) together. Together is the only way."

Vargas noted that he will need the help of every person in the district, from the teacher to the administrator, the custodian to the cafeteria worker, to ensure the success of all students.