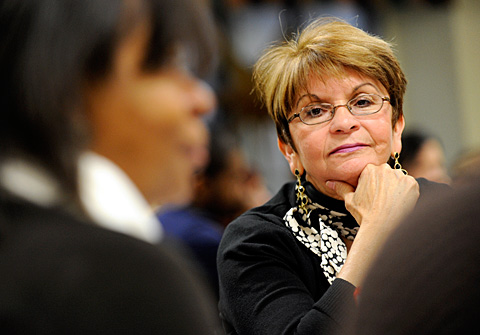 The thought-provoking statement is the caption for one of the photographs on a wall of portraits depicting how people see themselves in terms of race. The photograph is part of the "RACE: Are We So Different?" exhibition that runs through April at the Rochester Museum & Science Center.

And organizers and sponsors of the exhibition and corresponding Facing Race, Embracing Equity (FR=EE) initiative are working to make the caption’s sentiment a reality for the Rochester community sooner rather than later.

"We have to build a new world," said Kate Bennett, RMSC’s president. "But if we don’t get involved in our communities, that won’t happen."

Action for a Better Community had already begun such work seven years ago when the agency was invited to lead one of several national pilot projects to take on racial equity, explained James Norman, ABC’s president and chief executive officer. That led to the formation of the Rochester Initiative on Structural Equity (RISE).

Bennett was familiar with ABC’s work with RISE and approached Norman three years ago to join forces and find funders to bring the RACE exhibit to Rochester, said Norman, adding that he was on assignment at Rochester Institute of Technology. The Rochester Area Community Foundation stepped in with an agreement that a communitywide effort also be developed, he explained.

"We had to create a process and develop collateral activities to involve people (and) develop a plan of action that will be implemented after the exhibit has come and gone," Norman said.

Once the $200,000 grant for the exhibit was secured, RISE worked with RIT and the museum to create the FR=EE initiative, he added.

Norman outlined the three principal qualities of FR=EE during the launch sessions for the initiative that took place Jan. 8 and 9 at Asbury First United Methodist Church:

* Recognition that a solid approach will look at racism in all systems including education, law enforcement and housing. "The role of race crosses all of them," Norman said.

* People are at different places on the issue of race. "Others have the luxury of not thinking about race very often … but we all can do better together," Norman noted.

Following the launch, more than 150 people signed up to take part in groups that will look at race in the areas of housing, juveniles, criminal justice, job and workforce development, education and health care over the next two months, Norman said.

"They will be delving more deeply into the inequities that exist in those various areas," said Norman, adding that they will report on their findings at a follow-up summit that is expected to take place in May.

The kind of world where racism no longer plays a role will require people working together because the concept of race is a human invention, Bennett noted.

That is one of the main tenets of the exhibit that opened a week after the FR=EE launch. The RACE exhibit focuses on three themes: history, science and the lived experience, explained Bennett.

Stations offer hands-on experiences with race and racism, including a camera that shows all human cells are the same and matching a voice from an array of photos.

Such assumptions also were tested during a table exercise for the 250 people gathered for each of the two FR=EE launch sessions, noted some participants.

Tabitha Torres said her choice of "pride" as one of her six words surprised some of the people at her table, which surprised her, she explained.

"The beautiful part of the intention of the dialogue is that you get a lot of good information and good exchange," said Torres, who oversees the Latino Leadership Development Program. "On the other hand … folks were expecting just to hear negatives regarding just the topic of race."

To make sure the Latino voice is part of all these community discussions is why Hilda Rosario Escher said that she got involved in the steering committee for the FR=EE initiative.

But unity among all groups is the ultimate goal, she added.

"If the African-American and Latino communities come together and form a strong coalition, how powerful would that be?" noted Rosario Escher, executive director and chief executive officer for Ibero-American Action League. "It would be huge. … Power is in numbers. And if we are not working together, we are not going to be successful."

She said that she saw the lingering effects of racism on younger generations when the agency hired the Warner School of Education to survey Latino students and found that they face daily challenges because of their skin color and their language.

"Our generation needs to work on that so we can leave this world in a better place and the next generation does not come up with the same fears, prejudices and discrimination that we have," she remarked. "I just hope it (FR=EE) is not just another initiative."

Torres said that she, too, hopes FR=EE will be more than just a dialogue.

"I think it’s very important that we have these dialogues in a setting where you’re not being confrontational or someone’s not pointing at you so you can express your ideas and feelings and how (racism) has affected your life," she added. "But the part where dialogue is part of the action … that’s not enough to get us where we’d like to be."

Bringing youths to the race conversation, however, is vital, which is why Bennett said that the museum also is offering partial and full scholarships to schools. More than 5,000 area students are expected to view the exhibit, which was created by the American Anthropological Association in collaboration with the Science Museum of Minnesota and debuted in 2007, Bennett added.

"We’ve been working diligently on that (school component)," she said. "There are some very meaningful parts of the materials along the exhibitions. (For example), students have the opportunity to think about how they group themselves in the cafeteria, and really think about that and consider whether there’s opportunity for change."