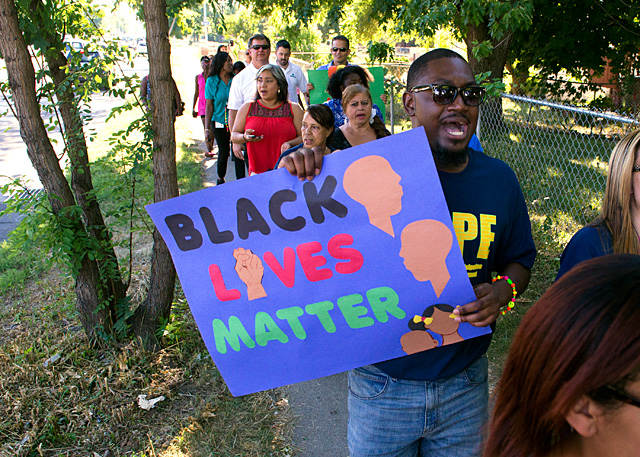 Project HOPE staff and volunteers will lead a march calling for peace in the northeast neighborhoods they are working to improve.

ROCHESTER — Nearly 50 city residents gathered in a non-air conditioned church hall on a 90-degree afternoon to hear plans for a new vision for their northeast Rochester neighborhoods.

The El Camino Revitalization Area plan presented Aug. 11 by the Community Design Center of Rochester is based on the ideas, concerns and desires that residents expressed during community meetings held over the past year. The revitalization effort was coordinated by staff from Project HOPE, an Ibero-American Development Corp. initiative aimed at improving the quality of life in northeast Rochester.

"The ownership on this project has been impressive," Eugenio Marlin said of the residents’ participation since the planning process began in April 2015.

"We (also) know the neighborhood didn’t get in the state we found it in 10 to 15 years ago overnight," he added. "It’s going to be a slow process to get it back to the way you want it to be. … But patience and persistence go hand in hand. It’s the only way we’re going to get the neighborhood back to how it was."

The plans from the Design Center, which are available at http://bit.ly/2bigUra, identified several areas of focus. The plans cover an area bordered by Avenue D, Scrantom Street, St. Paul Street and North Clinton Avenue in which more than 4,000 residents live.

The plans’ focus areas and ideas include the following:

* North Clinton Corridor: Improve signage, lights and sidewalks to boost pedestrian safety in phase one, followed by installation of kiosks, tents and booths to offer low-cost opportunities for vendors as well as repurposing a former fish market for retail/apartments and adding outdoor seating to El Pilón Criollo restaurant.

* Huntington Park and St. Paul Street: Initial steps would include removing chain-link fences and adding landscaping at individual homes on Huntington to help beautify the area, expand the median to improve pedestrian and bicyclist traffic, and expand the sidewalk and bicyclist lanes to the Genesee Riverway Trail Entrance.

* El Camino Trail, Conkey and Clifford avenues: Redevelop IADC’s 200 Clifford Ave. building as a potential job-training site or work/housing space, provide Buena Vista senior housing residents with access to the Genesee Riverway Trail to encourage walking and community connections, and construct a pavilion at Conkey Corner Park with restrooms and water fountains to enhance use of the trail and park.

* Neighborhood streets: Encourage residents to renovate their homes by connecting them with neighbors who have completed such work and who can demonstrate the value of home improvement, address traffic concerns through improved signage and additional speed humps, construct new streets across vacant lots owned by the city to boost neighborhood connectivity, and create east-west bus routes on Avenue D and Clifford Avenue.

* Underutilized buildings and sites: Sell vacant lots next to residential homes to those homeowners, follow the example of a Cleveland employee-owned cooperative that installed solar lights on an unused field to power local universities and hospitals, connect neighborhood groups with vacant lots that could be used for urban farming.

The goal for many of the ideas is to increase "eyes on the street" by making the neighborhoods pedestrian friendly, noted the design center’s staff.

"We want more people walking," said Maureen Duggan, executive director of the Community Design Center of Rochester. "We want lots of people out on the street so people feel more comfortable and safer."

Ida Peréz is one of those residents who not only lives but also works in the El Camino area. She said residents have waited too long for the kinds of changes proposed by the plans, but that she is excited about the possibilities they offer to the people who make the area their home.

"It really gives us hope about what this neighborhood can be," she added.

Peréz said that she hopes more homeowners and business owners will improve building facades and makeover their properties as the plans suggest.

"That would make such a big difference and (attract) more businesses to the area," she said. "(Outside) people can see there are people who care about their property and what happens to it."

Miguel Meléndez, Project HOPE’s director, said his staff has started working with business owners on the plans’ initial phase of facade improvements and signage. He noted that the neighborhood has already experienced positive changes in the last few years, from the opening of El Camino Trail to the construction of El Camino Estates for fist-time homebuyers along Conkey and Clifford avenues, to the debut of what will be an annual Harvest Festival at Conkey Park.

This fall, the focus will be to increase participation in the Garden of HOPE, a community garden at the corner of Conkey and Clifford avenues that is being tended to by neighbors, Meléndez said.

"It’s amazing to see so many people pitching in hours, pitching in time," he said of the garden. "Little by little, people are starting to take ownership of this corner."