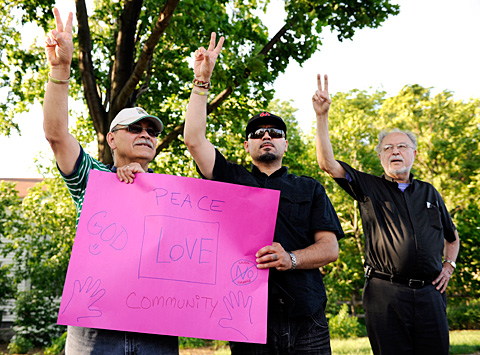 ROCHESTER — Residents, community activists and city youths hope the momentum from a recent peace march will help transform their neighborhoods in northeast Rochester.

The march was led by staff members from Project HOPE, which is an initiative of Ibero-American Development Corp. Such marches began in 2009 in collaboration with St. Michael Church and initially served as an anti-drug effort. They have since expanded to allow other agencies and neighborhood block groups to participate and do outreach, explained Sacha Rios, Project HOPE’s resident participation coordinator.

The May 29 turnout attracted the most people in three years, said Rochester Police Officer Erique Gómez, who accompanied the group’s walk along North Clinton Avenue, Oakman Street, and Conkey and Clifford Avenues.

"It was perfect — the amount of time and the ground covered were good areas to cover," he said about the hourlong walk.

The positivity conveyed by the group also was a key component, Gómez added.

"People feel the city is lost," he added. "But if everybody pitches in, we can bring the city back."

Project HOPE aims to do just that not only through the marches but through the "Rochester Drug-Free Streets" initiative, for which the organization received a nearly $400,000 grant last December.

The initiative’s goal is to help "low-level" drug sellers turn their lives around and find legitimate sources of income, said Jackeline Vázquez, the program coordinator.

Fifteen-year-old Gilberto Colón said that helping those sellers, many who are young like him, will be a challenge.

"It’s a big commitment," he said of Project HOPE’s latest undertaking as he marched with teammates from the Rochester Hispanic Youth Baseball League May 29. "It’s the right thing to do (to help sellers) … but it’s hard."

Project HOPE will have its work cut out trying to convince young men like him to believe its program will help when he has heard similar promises before, said Walter, a 21-year-old Rochester native, during an interview June 4. He asked that his last name not be used.

"I gotta get money, I’ve got a child on the way," he said, noting that he also has a nearly 1-year-old son to support. "Would it be wrong to do what I’m doing to feed my children? … People don’t sell drugs for no reason."

When Rios asked Walter if he would be willing to consider the Drug-Free Streets program if a job would be guaranteed, he said that he would be.

"There’s a reason behind anything," he remarked. "You can’t judge a book by its cover."

When he was 10 years old, Walter said that he and his younger brother were left to fend for themselves after his father was killed and his mother only cared about her drug habit. His older brother was off in prison. He hopes that his own children get to finish school and find a different way of life, he added.

"Don’t make me out to be a bad person," Walter said. "Everybody’s going through different things."

But the presence of such low-level drug sellers at Conkey and Clifford avenues — which is the initial area being targeted by the Drug-Free initiative — makes it difficult for neighbors to walk to the corner store or take their children to the new playground that Project HOPE built in partnership with other organizations, said Migdalia Hernández, who lives on Clifford Avenue.

"It’s not safe in the neighborhood," she said. "People need to get involved."

Neighborhood residents will play a big role in the community conferencing circles that also will be part of the Drug-Free Streets initiative, said Vázquez.

The community circles will put the sellers in the same room with neighbors — who will be trained in restorative practices — as well as representatives from area agencies, employment resources and law enforcement, Vázquez said. The discussions will focus on helping the sellers understand the ramifications of their actions, she added.

Rios has spoken with half a dozen dealers who are interested in participating in the circles, as long as they also are guaranteed some source of income, she said.

Finding employers to participate in the initiative will be vital for the program’s success, concurred Rios and Vázquez. Because even if they attempt to apply for a job at a nearby McDonald’s or a Walmart, the applications of such youths are more likely to be ignored because of their criminal histories, Vázquez added.

"They’re at the bottom of the barrel," she said in regard to being selected for employment opportunities. "They’re not even called in for an interview. … They can’t even get in the door."

To get the Drug-Free initiative moving forward, Vázquez recently came on board and a restorative practices coordinator will join the effort this summer, she said. Currently, the program’s committee is working on changing city ordinances regarding low-level drug sales, she explained.

"Possession of marijuana 25 grams or less has been decriminalized, which means it is a violation equivalent to a hefty parking ticket," Vázquez said. "Just this year, the governor proposed to decriminalize marijuana further, which makes it easier (with less threat from law enforcement) for those who are on the corners selling."

What the initiative committee hopes to do to is make such sales more difficult by declaring the sale of marijuana in a public space to be a city nuisance, Vázquez said.

"Having this public nuisance on the books will provide a vehicle for us to use in civil court when we bring forth the injunction asking the judge to prohibit that individual from hanging out on the corner in which they’ve sold drugs," she said.

Cleaning up a corner like Conkey and Clifford avenues shows that Project HOPE is doing all the right things trying to clean up their neighborhood, said Eugene and Andrea Hryhorenko.

"We’re showing a lot more promise now that the city and the police department are really actively involved with block clubs in the area," he said. "That makes a difference."

While more needs to be done to keep people in the city, said his wife, Project HOPE is also coming through with marches and beautification projects such as the El Camino trail, community gardens and playgrounds.

"We see what Rochester has to offer," Andrea Hryhorenko said. "But if you lived in Irondequoit or Brighton, would you put up with this (crime)?