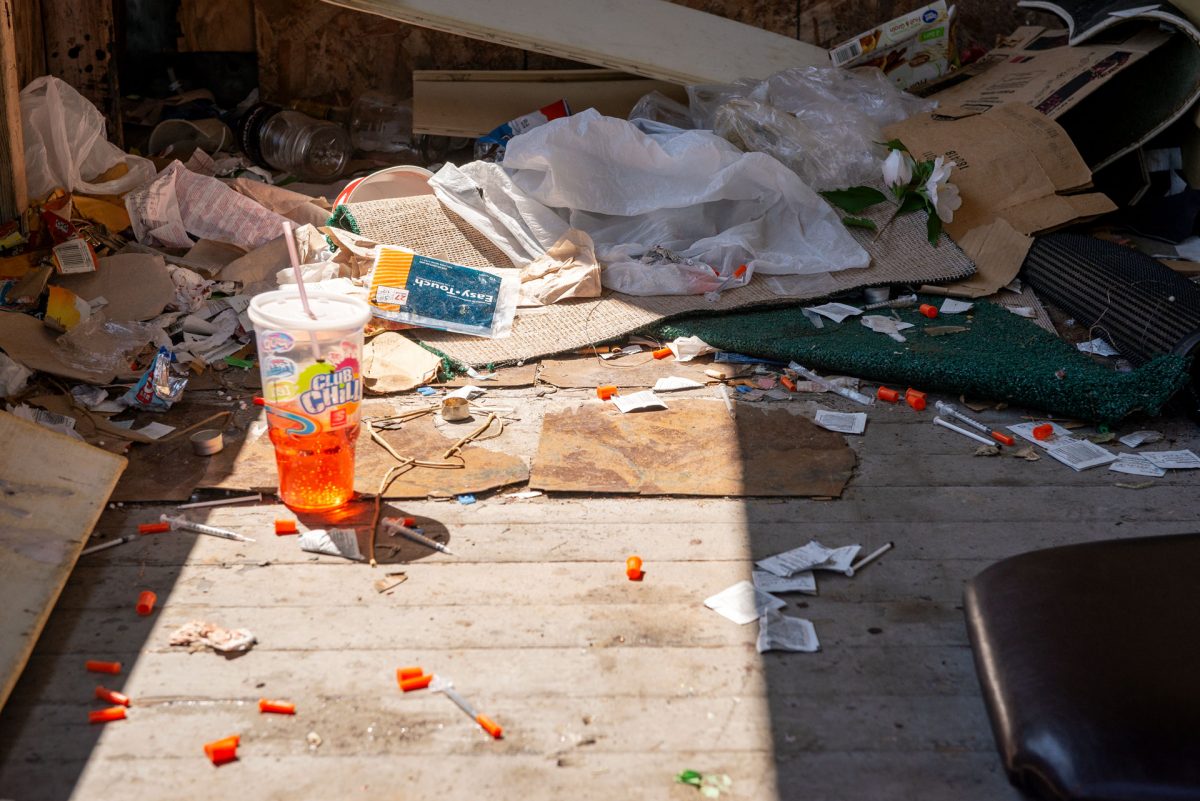 The porch of a vacant home on Berlin St. in Rochester is littered with used needles.

ROCHESTER — Spend some time with Hope Dealers BTC, and you’ll understand why the opioid crisis is often called an epidemic.

Every Sunday beginning at 10 a.m., the grassroots organization meets on Sullivan Street near North Clinton Avenue, across from St. Michael Church. Volunteers slip on rubber gloves and spend the next few hours scouring the surrounding neighborhoods, carefully picking up used hypodermic needles that carry the threat of transmitting such diseases as HIV and hepatitis.

“This is our ground zero,” stated Stephanie Forrester, organizer of Hope Dealers BTC, whose concluding initials stand for Be The Change.

As 14 volunteers accompanied by security guards began their work one recent Sunday morning, a small stream of young and middle-aged men walked past them toward a vacant lot where, according to Forrester, they would soon be shooting drugs. Meanwhile, in the back yard of an abandoned house, a man injected a needle into his arm in plain sight.

Near the entrance to a small church, volunteers removed numerous needles as a service was took place inside. Most residents and passersby were cordial to the volunterr group, save for one man — who Forrester said was probably a drug dealer — who angrily screamed at them to leave the area.

When her organization made its first Sunday pickups in the fall of 2017, Forrester said volunteers were collecting 200 to 300 needles per week in the city neighborhood. Now they are amassing as many as 1,600-plus in a single day’s work.

But the epidemic of opioid addiction is not confined to urban areas, a fact that she and fellow Hope Dealers BTC volunteer Chris Perry know firsthand. Both grew up in the suburbs — Forrester in Fairport, Perry in Spencerport — before their drug addictions left them homeless on the city’s streets.

“I, myself, have lived in abandoned properties like this one,” Perry said as he removed needles from the inside of a trash-strewn house.

Perry, 31, said he began using drugs when he was 15 and became homeless at 18. He credits Forrester for helping him get into a treatment program a year ago.

He and Forrester, who also is in recovery, now strive to aid others who are struggling with addiction. Beginning at 1:30 p.m. each Sunday at the Father Tracy Health & Wellness Center, 821 N. Clinton Ave., Hope Dealers BTC offers food, coffee, clothing and personal-care items as well as encouragement for those who may wish to get treatment for their addictions.

Their efforts address a scourge Perry said is steadily worsening. Drug abuse is nothing new, he acknowledged, but what has changed is the incidence of death from such lethal opioids as heroin and fentanyl. Perry and Forrester — whose husband, Justin, died of an overdose in January 2017 — said they’ve lost many friends and acquaintances to drugs in recent years.

“This next generation is just dying,” said Forrester, 37.

According to the Monroe County Medical Examiner’s office, the use of heroin, fentanyl and/or related substances caused 287 deaths across an 11-county region in 2017, with 22o of those fatalities occurring in Monroe County. That figure marks a dramatic rise from 2015, when the combined total was 85 for Monroe along with Allegany, Chemung, Genesee, Livingston, Ontario, Orleans, Steuben, Wayne, Wyoming and Yates counties.

Nationally, the Centers for Disease Control and Prevention (CDC) reports that drug overdoses killed 63,632 people in 2016, marking an all-time high and an increase of 21.5 percent from the previous year. Approximately two-thirds of those deaths involved a prescription or illicit opioid, with opioid-overdose deaths increasing five-fold between 1999 and 2016.

Opioids are drugs produced through either a partial or fully synthetic process. They include oxycodone (often known by the brand name OxyContin), hydrocodone and methadone. Adults of all ages run the risk of becoming addicted to opioids after taking them as prescribed medications for pain. Data from the Monroe County Medical Examiner shows that the median age for opioid overdose deaths last year was 38, with victims ranging in age from 20 to 82.

Common Ground Health, a Rochester-based research group, found that in 2016, pain-medication overdoses were highest among people ages 50 and up across its nine-county region — Chemung, Livingston, Monroe, Ontario, Schuyler, Seneca, Steuben, Wayne and Yates counties — whereas heroin overdoses were most prevalent among 15- to 29-year-olds.

One opioid of special note is fentanyl — a medication for treating severe pain, often prescribed for advanced cancer patients and people recovering from surgery — which according to the CDC is 50 times more powerful than heroin. The CDC notes that when fentantyl is illicitly manufactured and mixed with heroin, this opioid can quickly kill an abuser who may or may not be aware of its presence.

Meanwhile, the popularity of heroin — an illegal substance that is processed from morphine and comes from the same family of drugs as prescription painkillers — has grown immensely because it is cheap compared to prescription drugs and readily available on the street, said Cathy Saresky, vice president of clinical innovation for Catholic Family Center and a presenter at a June 14 public forum on opioids at Penfield’s St. Joseph Church. Saresky added that three out of every four heroin addicts began with prescription medication.

Deb Leach, another presenter at the CFC-sponsored event, told of growing up in financial comfort in Webster, but with a mother who became addicted to opioids after they were prescribed to her following spinal surgery. Her mother went on to spend thousands of dollars per week to obtain opioids illegally before turning to heroin and disappearing into the streets of Rochester. After four years without contact, Leach received a collect call from her mother, who was being held at the Monroe County Jail, her arms covered in track marks from needle injections. Eventually, Leach did manage to get her mother into a successful treatment program.

“In March we celebrated 12 years (of sobriety),” said a choked-up Leach, who now works as a counselor for the Open Access Clinic in Rochester, which helps people with addiction.

At St. Joseph, Saresky and Leach spoke to approximately 25 people, including some who said they have loved ones fighting addiction. Several similar presentations have been given at parishes around the Diocese of Rochester, in keeping with the Diocesan Public Policy Committee’s focus on the opioid crisis as an educational priority for 2018.

Michela Peters — who, like Leach, is a counselor at the Open Access Clinic — spoke at CFC-sponsored seminars this past spring at Our Lady of Lourdes in Brighton and St. Anne in Rochester. She told audiences that she comes from a family long affected by substance abuse, including her brother, Joey Maiola, who died from an overdose of heroin and fentanyl in June 2017 at age 32.

Peters said she never stopped loving her brother and called for others to seek a deeper understanding of the nature of addiction, pointing out that it is a brain disease that is extremely difficult to overcome.

“It can be easy to equate (addiction) with a moral deficiency, and that’s completely inappropriate and hurtful,” Peters, a parishioner at Our Lady of Lourdes, told the Catholic Courier. “(But) what are the values that we practice as Catholics? Love and compassion and forgiveness and hope.”

The diocesan seminars are among many efforts on opioid-related awareness and prevention taking place in the community. Other initiatives to address the crisis include expanded law-enforcement staffing; increased access to treatment; promotion of emergency response such as access to and training for administering naloxone, a drug that can reverse the effects of opioid overdose; and reducing the availability of unused prescription drugs through take-back events.

Among the legal measures to combat the over-prescription of legal painkillers is New York state’s Opioid Stewardship Act, which took effect July 1. The act requires manufacturers, distributors and importers of opioids to report transaction details for their sale and distribution to the state Department of Health’s Bureau of Narcotic Enforcement.

Forrester views such efforts as part of an uphill battle. She noted, for example, that there currently aren’t enough police to keep up with the flow of illegal opioids into the neighborhoods where she volunteers.

Yet she carries on through advocacy, needle pick-ups and extending kindness toward the folks she encounters along the way. Such was the case on July 15 as Forrester distributed bag lunches and bottled water to people walking the streets.

“I want to say you are definitely a role model here,” one man told Forrester, adding that he hopes to find the willpower to kick his addiction. He ended their brief chat by saying, “God bless you.”

“Thanks. I don’t forget what it’s like,” Forrester replied.

Forrester, who noted that she’s been clean since 2016, said her Catholic faith has played a big part in her ongoing recovery.

“I was homeless on these streets, I was prostituting. I shouldn’t be alive, but I am,” said Forrester, who attends St. John of Rochester Parish. “I’m so thankful to be alive, and there’s no other possible explanation than that God was with me.”