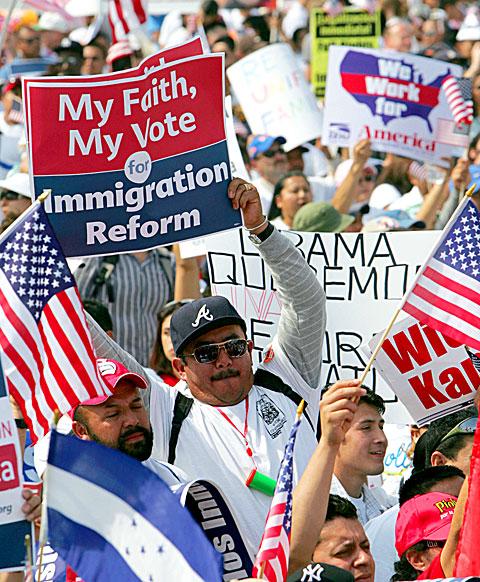 WASHINGTON (CNS) — By bus from across the country and on foot from across town, an estimated 200,000 people flocked to the National Mall March 21 to press Congress and the president — with signs, banners, T-shirts, chants and prayers — to make good on promises to fix the immigration system.

U.S. citizens, legal immigrants and some who admitted they are in the country illegally covered a six-block stretch of the Mall to make their case for reforming a system that keeps families apart, limits students’ education prospects and causes millions of people to exist “in the shadows,” because they lack legal papers.

Before marching three miles past the Capitol to RFK Stadium, where their buses waited, the exuberant, hopeful crowd waved flags and signs as speakers told their personal immigration stories. Other speakers pledged the support of their churches, unions and human rights groups.

A videotaped message from President Barack Obama brought a hush to the crowd, turning to cheers as he pledged “to do everything in my power to forge a bipartisan consensus this year on this important issue. You know as well as I do that this won’t be easy, and it won’t happen overnight. But if we work together — across ethnic, state and party lines — we can build a future worthy of our history as a nation of immigrants and a nation of laws.”

A few blocks from the Capitol at St. Aloysius Church before the rally, Los Angeles Cardinal Roger M. Mahony spent 30 minutes greeting people arriving for a special Mass. In a homily that invoked the late labor leader Cesar Chavez, with whom the cardinal worked for many years for farmworkers’ rights, he noted that after the events at the Capitol that day it would be time for immigration reform to take the political stage.

In a phone interview with Catholic News Service the next morning, Cardinal Mahony said passage by the House of a health care reform bill hours after the rally “is helpful to immigration reform efforts,” given the current political climate.

“The president made a very firm commitment during the campaign and again recently that immigration reform is one of his top priorities,” the cardinal said. Now that a health care bill will help millions of uninsured people receive affordable medical care, he added, it’s to address the millions of people who are living in the shadows because they lack legal immigration status.

“This is unfinished business,” Cardinal Mahony said, adding that bringing those immigrants into the system for paying taxes and tapping into assorted public services will help the U.S. economic recovery.

Among the crowd on the Mall estimated by organizers at 200,000 people, Jose, described his motivation for making a 15-hour bus ride from Florida.

A U.S. citizen who was born in Mexico, Jose explained that his wife lacks legal immigration status. He lives in constant fear that she will be arrested and deported.

They have three young U.S. citizen children. While he works 13- to 14-hour days, his wife manages the household, gets the children to and from school, doctors and other activities, he said.

But now, Florida law will require her to show proof of legal immigration status to renew her driver’s license next year. Lacking that license, the family’s way of life will have to change.

Of bigger concern to Jose, who asked that his last name not be used, is that “I’m afraid, every moment, that she will get arrested and taken away from me and our children.”

He doesn’t believe that either he or his wife can safely return to their native Mexico, mostly because of the pervasive violent crime.

“My family there already is threatened because the criminals know they receive help from me,” Jose said.

“She has so much heart,” he said, describing how lost he and his children would be if she were deported. “She’s a wonderful mother.”