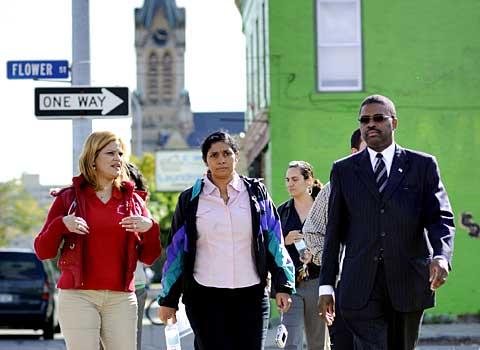 ROCHESTER — During a recent tour of Rochester, a Nicaraguan mayor made a stop at Ibero-American Action League’s Promotores de Salud office to learn more about the community health-outreach program, which also is being emulated statewide.

Mayor Rosa Amelia Valle Vargas said that her hometown of El Sauce, Nicaragua, where she is mayor, has a similar program through its national health-care system. Maribel Torres, Promotores de Salud’s coordinator, explained how her staff focuses on getting people in the city’s northeast neighborhoods enrolled in insurance programs and referring them to primary-care doctors. Vargas said that on the other hand, the outreach staff in Nicaragua — called "brigadistas" — have spent the bulk of their time this year traveling to outlying areas of the country to educate about the H1N1 virus.

While health care is a single-payer, government-run system in Nicaragua, many clinics and hospitals lack the kind of resources available to patients in the United States, Vargas noted. But government-funded health care is still a concept worth emulating, she added after a walking tour of the neighborhood surrounding the office at 777 N. Clinton Ave.

Vargas was elected mayor of El Sauce in 2008. The rural town, which has a population of about 30,000, is one of the poorest areas in Latin America, according to information from Metro Justice’s El Sauce Ciudad Hermana Task Force.

With financial support from First Unitarian Church of Rochester’s Paul Wenger Fund for Peace Through International Understanding, the task force hosted Vargas’ visit to foster business development, education and improved health-care opportunities in El Sauce. Her nine-day visit included talks with Rochester government officials and other community organizations, said Michael Argaman, who served as a guide and translator during the visit.

Visits from previous El Sauce mayors have led to the creation of a University of Rochester Medical Center program with residents donating their skills at medical clinics in El Sauce, as well as a small-business-development project aimed at women, which was created by students from SUNY Geneseo, Argaman added. That connection has expanded into an eco-tourism project, student-run English classes and students getting dental experience at clinics in El Sauce, he noted.

Ibero’s Torres said that Vargas’ visit was also a stamp of approval for Promotores de Salud. The New York State Health Foundation, which provided a two-year grant to help fund the program’s start-up and operating costs, plans to use Promotores de Salud as a model for other communities. In its two years, the promotores have connected nearly 700 people with health care by enrolling them in insurance programs or directing them to clinics, Torres added. She noted that they also have sponsored their own health fairs as well as attended numerous community events and activities to educate people about their options, such as enrolling in Child Health Plus or Family Health Plus or seeking care at such free or low-cost medical care at centers as Mercy Outreach Center and St. Joseph’s Neighborhood Center.

"The way we’re doing this is what is amazing them," Torres said of the foundation’s reaction. "We go door to door, event after event. We don’t rest."

According to information from Latino Health Access, a health-promotion and disease-prevention program in Santa Ana, Calif., that began about 15 years ago, the promotores concept has existed worldwide for more than a century. When Ibero started Promotores de Salud two years ago, staff members received training from the creator of the Santa Ana program. Ibero also received the $350,000 to start the program from the state health foundation as well as the Rochester Primary Care Network and the Monroe County Office of Mental Health.

It’s that kind of collaborative approach that also has been impressive to the state health foundation, said Kavita Das, a program officer. The foundation has just approved a project to develop a statewide standard of practice for community health workers, create a certificate program for these workers, and identify and secure stable funding streams such as insurance companies, she added.

"The foundation is very interested in the utilization of community health workers/promotores as a means for increasing awareness, prevention and management of health issues in underserved communities," Das noted. "NYSHealth has been impressed with Ibero’s ability to utilize a collaborative approach to developing the Promotores de Salud program to increase access to insurance and health care amongst underserved populations in the Greater Rochester area."

Torres explained that when a promoter identifies a person with no insurance, the staff matches the person with a program and sets up an appointment with a doctor. But the promotores don’t stop their work there, she added. They will provide transportation, accompany the person to the doctor and ensure the patient follows up on treatment for Latinos who have been identified with three of several targeted conditions. Those include asthma, diabetes, heart disease, elevated lead levels, obesity or mental-health issues.

"Ibero’s Promoters de Salud program provides a model for using (community-health workers) to increase access to care for (Latino) populations in the Greater Rochester area and their approach can be leveraged in other parts of the state and country," Das remarked.