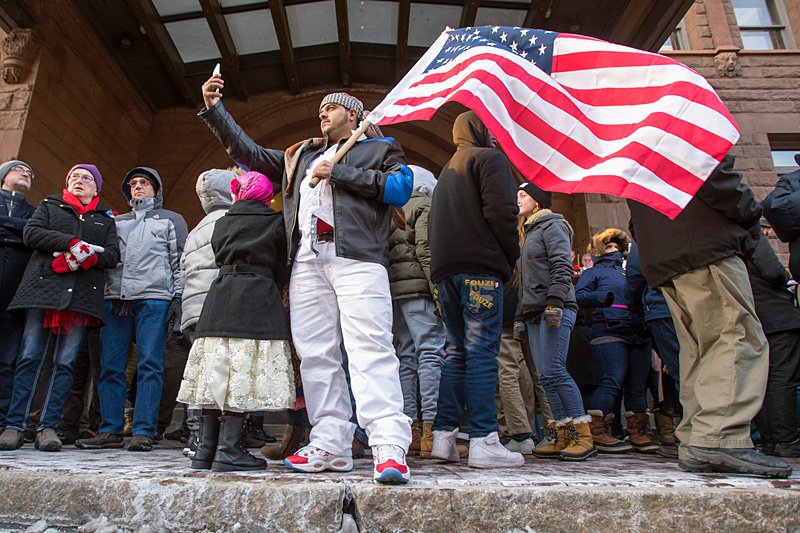 ROCHESTER — Hundreds of people recently showed their support of refugees and immigrants by flocking to two local events.

More than 500 people braved bitter-cold temperatures to take part in the ROC Stands With Refugees rally outside of Rochester’s City Hall on Feb. 3, and the Welcoming the Stranger: Interfaith Prayer Service held across town at Temple B’rith Kodesh on Feb. 5 was standing-room only.

A protestor holds a sign in support of refugees during a Feb. 3 rally outside of Rochester’s City Hall to protest President Donald Trump’s executive order on immigration and refugees.

Both events were planned in response to a controversial executive order signed by President Donald Trump on Jan. 27. This order suspends the nation’s Refugee Admissions Program for 120 days, bars Syrian refugees from entering the U.S. indefinitely and banned the entry of citizens of Syria, Iraq, Iran, Sudan, Libya, Yemen and Somalia for 90 days. It also proposed prioritizing applications from refugees who are members of religious minorities in their own nations. Critics of the order have said it discriminates against Muslims.

Just hours after the Rochester rally ended, a federal judge in Washington blocked the executive order with a temporary restraining order, preventing enforcement of the order’s provisions nationwide. The government appealed that ruling, but on Feb. 9 a federal court of appeals refused to reinstate the executive order. The panel of three judges from the 9th U.S. Circuit Court of Appeals unanimously upheld the lower court’s temporary restraining order, but Trump may still appeal to the U.S. Supreme Court.

The throng of people participating in the peaceful protest Feb. 3 filled the street in front of City Hall, where a recently hung banner proudly proclaimed Rochester as a sanctuary city, or a community that is inclusive and welcoming to all. The protesters waved American flags and displayed signs bearing such messages as, "We defend our Muslim brothers and sisters," and "No Hate! No Fear!" Pope Francis even had a presence at the rally, thanks to a cardboard cutout of the pontiff carried by Marvin Mich, director of advocacy and parish social ministry at Rochester’s Catholic Family Center.

Mich, who was with a group of people from Catholic Family Center and St. Joseph Parish in Penfield, said it’s important for Christians to remember that Jesus was a refugee. Welcoming people who have struggled and suffered is part of being Catholic as well as part of being an American, added Ruth Putnam Marchetti, Catholic Family Center’s social-ministry coordinator. Catholics long have been called to give voice to the voiceless and care for others, noted Cathy Kamp, pastoral associate at St. Joseph.

"No matter who is in office, who is in charge, what we believe in doesn’t change," Kamp said.

Tom Glisson, a fellow member of the St. Joseph contingent, said he’s met some wonderful people through his volunteer work with Mary’s Place, a refugee outreach center in Rochester.

"It compels me to be here today," Glisson said of the experience.

The hundreds who participated in the rally were standing up for their neighbors, Rochester Mayor Lovely Warren said during the event.

"This is what we do in Rochester. We stand with our immigrants and refugees who are welcome, not just here at City Hall, but everywhere in our city. … Bring us your tired, your poor, your huddled masses, and we will welcome them, because we are a sanctuary city," she said.

Warren was joined at the podium by a number of former refugees, immigrants, students and advocates who shared their personal stories and rallied the protestors. Carly Fox, an advocate from the Worker Justice Center of New York, said she was heartened by the presence of so many people willing to stand in solidarity with immigrants and refugees.

"Looking around at the third protest in Rochester here in two weeks, I feel alive," she said.

Just two days later, hundreds of people again turned out to show their support, this time at Temple B’rith Kodesh. Concerned religious leaders from across Monroe County planned the prayer service the week after Trump signed his executive order banning travelers from seven predominantly Muslim countries, according to Rabbi Alan Katz of Temple Sinai in Penfield.

"We needed to do something, but do it in a prayerful, peaceful nature. We pray with peace and hope," Rabbi Katz said, noting that organizers invited representatives from as many faiths as possible. "It’s important to come together and show the community that though we may vary in our approach to belief, we stand together on the important issues."

The service included readings from the Bible, the Torah, the Koran and the Book of Mormon as well as Hindu prose. Bishop Salvatore R. Matano of the Diocese of Rochester read a Scripture passage from the Old Testament book of Deuteronomy.

"So you too should love the resident alien, for that is what you were in the land of Egypt," Bishop Matano read.

Rabbi Katz encouraged those present at the prayer service to take action to support refugees and asylum-seekers who would be denied justice. He suggested several ways to take action, including:

* contributing to organizations that work with refugees, such as Mary’s Place, Saint’s Place and Refugees Helping Refugees;

* collaborating with other faith groups; and

* inviting families of different faiths and ethnicities over for dinner.

"Let’s commit to working together to make the world, our world, a more just and more secure place for everyone. The refugee population here will help us in ensuring (that) safety. They are not a threat. They are an asset to our future," Rabbi Katz said as those in the crowd applauded. "They are future leaders in this country. That’s why we must be sure to follow our teachings — to welcome the stranger and to stand up and be counted."