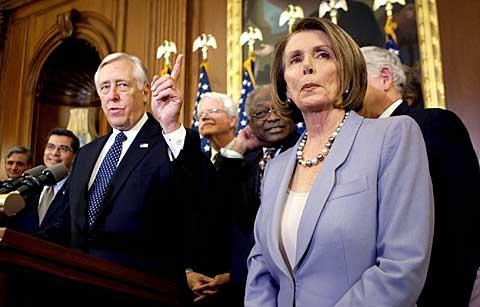 WASHINGTON (CNS) — The House of Representatives passed historic health reform legislation late March 21 but rejected a last-ditch effort to send a package of legislative fixes back to committee in order to insert language on abortion supported by the U.S. bishops.

The votes were 219-212 in favor of the Senate-passed health reform bill, and 232-199 against a motion by Rep. Dave Camp, R-Mich., to recommit the reconciliation package to committee with instructions to substitute language that would codify the Hyde amendment, which forbids federal funding of most abortions.

The vote on the reconciliation package, which concluded shortly before midnight, was 220-211. Twenty-three Democrats joined all 178 House Republicans in opposing the measure.

Sister Carol Keehan, a Daughter of Charity who is president and CEO of the Catholic Health Association, praised the legislation, saying it "represents great progress in the long effort to make health care available and affordable to everyone in the United States." She urged the Senate to take quick action to pass the reconciliation package.

The House votes came only after Rep. Bart Stupak, D-Mich., obtained a promise from the White House that President Barack Obama would sign an executive order stipulating that the Hyde amendment would apply to the health reform legislation.

Stupak, a Catholic, had led a group of pro-life House Democrats in opposing the Senate health reform bill unless if were amended to include abortion language passed by the House last year. The U.S. bishops had backed those efforts, saying the Senate-passed bill’s abortion language was morally unacceptable because it contained "no relevant provision to prevent the direct use of federal funds for elective abortions."