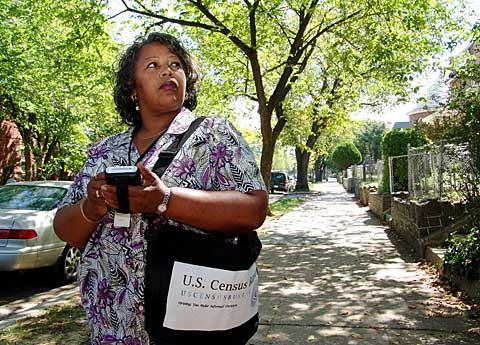 Eugenio Cotto is trying to making sure all area residents — but Hispanics in particular — are counted in the 2010 U.S. Census that will take place this spring.

He is not alone as organizations statewide and nationally work together to make sure they reach traditionally undercounted populations to ensure that all residents are counted. The negative financial and political impacts of undercounting residents are great, say New York Senate officials.

For the state, it could mean the loss of more than one congressional representative and millions of dollars in federal aid, remarked Karen Duffy, deputy director of the state Senate’s "Count Me In" initiative. Each person not counted represents $10,000 lost in federal funding over 10 years, said Josh Norek, deputy director for Voto Latino, a national youth civic-engagement organization for Hispanics.

"In economic times as today, we want to get as much as we can from the federal government," Duffy noted.

"Count Me In" committees give neighbors, businesses and faith-based leaders an opportunity to help spread the word about the importance of participating in the Census to make sure all available funds stay in the state, Duffy said. Gov. David Paterson last month announced that more than $2 million in grants were awarded to community groups and local governments to ensure a complete count for New York. It is estimated that about 200,000 were not counted statewide in the last Census, according to information from the governor’s office.

In such communities as Rochester, which have experienced a 34-percent drop in population since the 1950s, ensuring an accurate count of Latinos is imperative, Norek noted. Without Latinos moving into upstate New York, that overall drop in population would have been greater, he said. Additionally, these populations rely on services that receive federal dollars including public transportation and education, Norek added.

"The Latino population is crucial," said Cotto, a member of the Monroe County complete count committee. "We have to dispel the fears (of participating in the Census). And we have to dispel myths. … This information is protected by federal law and cannot be used in a discriminatory fashion by anyone."

Locally, the Hispanic majority is Puerto Rican, noted Cotto, who also is president of neighborhood association Group 14621. Wayne Winert, manager of the Rochester area Census office that covers seven counties from Niagara to Ontario, said the bureau is striving to have Spanish-speaking employees to help people in areas like northeast Rochester. As of January, eight Hispanic bilingual employees had been hired, he added, with a goal to hire 75 such workers.

Voto Latino is aiming to reach a younger crowd about the Census through its Web site and public-service announcements featuring Latino celebrities, he explained. The hope is that these youths, often first-generation Hispanics and the ones in their families who best understand English, will encourage their parents to fill out the form, Norek said.

He recalled that as an elementary-school student, his teacher told his class about the dangers of smoking. Norek came home and flushed his parents’ cigarettes down the toilet, and said that they soon stopped smoking.

"Latino youths are key influences in their families and their communities," he said.

Groups like Voto Latino are especially important to help recent immigrants who may be completely unfamiliar with the Census count, said Lourdes Ventura, counsel for Latino and Immigrant affairs with state Sen. Malcolm Smith’s office.

"We have been focusing our efforts on populations that have previously been hard to count or undercounted," she added.

Additionally, the Census Bureau must ensure that it hires culturally sensitive, dual-language speakers for such areas as northeast Rochester, where not only is knowledge of Spanish useful but also Eastern European and Asian languages, Duffy said.

"Getting people to reply to the Census who are undocumented will be a difficult task," she added. "It is OK (to fill out the Census). They won’t get deported."

Ventura said that she oversees workshops in traditionally hard to reach communities to educate them about the Census. She also spoke about the Census as a panelist for workshops held during the Latino Upstate Summit held last October in Syracuse.

The Census Bureau also has made information available on its Web site in 59 languages, according to information at www.census.gov. The Census form will be available in Spanish, Russian, Korean, Vietnamese and Chinese upon request, Ventura said. Beginning in March the bureau will mail out 120 million forms, and 13 million of them will be in both English and Spanish.

If the 10-question form is not mailed back, a Census taker will make a personal visit, she added. The Census Bureau has been diligent in updating address lists for this count, Duffy said.

Unsuccessful attempts have been made to derail an accurate count, Duffy and Ventura said, noting a congressional proposal to ask if the person filling out the form is a citizen as well as a boycott campaign mounted by an evangelical minister. The minister claimed that the boycott would show the need for federal immigration reform, Ventura added.

"It’s basically the opposite," Duffy said. "Political representation and change in the political world depend on numbers. If you’re a very large-numbered community, you have a greater voice. If you tell a community not to tell the government that you exist, basically you have silenced the community. … If I was an undocumented resident, wouldn’t I want the government to know there are thousands of us here who are willing and able to be paying citizens if allowed some kind of amnesty? That’s a more powerful message."

EDITOR’S NOTE: For information in Spanish about the 2010 U.S. Census, visit www.Hagasecontar.yaeshora.info. To learn more about employment opportunities with the Census Bureau, visit www.2010.census.jobs.gov. Voto Latino is giving out gift cards as part of its Census outreach efforts, and information about that program is available at www.votolatino.org.