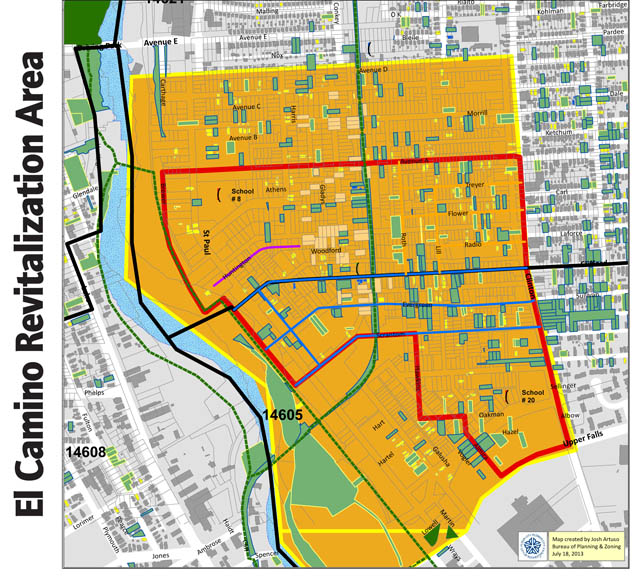 ROCHESTER — Forty-eight percent of the residents in the El Camino Revitalization Area live in poverty.

One in four of them has a job.

Sixth-three percent of the area’s children live in poverty.

Those are just a few of the stark challenges facing a group working to reverse those trends and provide a better life for residents in the area surrounding North Clinton Avenue, according to a report that was developed after last November’s community charrette — a meeting to resolve conflict and create solutions (http://bit.ly/1UKolog).

"It is very important for anyone who lives in this area to see what happens if we put our heads together as one body, as in Christ," said Wanda Martínez, who lives on Treyor Street. "We are a residential area. We need to take our streets back. It’s important for us to be able to stand together."

Standing together to transform the North Clinton Avenue neighborhoods and beyond was the goal of the El Camino Revitalization Area community charrette with residents and other stakeholders, explained Miguel Meléndez, special projects director for the Ibero-American Development Corp. (IADC).

"We wanted to create a vision from the grassroots," Meléndez said.

More than 100 people attended the November charrette, which was held at St. Michael Church, Meléndez said. The event included a training session as well as a walk-through of the neighborhoods in question. Group recommendations were compiled and mapped out, with follow-up meetings to be held monthly until April, when a draft plan will be presented to the community, he added.

"We want to make sure what we’re putting in the plan reflects what residents really want to see," Meléndez said.

IADC first became involved in neighborhood revitalization when it created Project HOPE with funds from the Greater Rochester Health Foundation. That initiative led to the development of El Camino trail and the townhouses that were first offered to lower-income residents for purchase several years ago to help improve the Conkey and Clifford avenues neighborhood, Meléndez said. Project HOPE also took part in a drug-free streets initiative, neighborhood marches and overall improvement in neighborhood safety, he said.

The agency and neighbors agreed, though, that this time around the scope of any new projects had to be bigger for true change to take hold, he added.

So the agency formed a 20-member steering committee of residents, community members, business owners and other stakeholders that organized the charrette, chose focus areas, and outlined challenges and resources, he added. The six focus areas include a focus on residential streets, development of Conkey Corners, and underutilized buildings and sites, Meléndez said.

The committee then expanded the physical boundaries of the revitalization area beyond North Clinton Avenue to go west to Saint Paul Boulevard and north to Avenue D, he said. The group also partnered with the Community Design Center of Rochester to map out the areas of discussion and participate in the charrette.

Many of the ideas that arose from the charrette that can be completed in the short term include beautification projects and how to better connect the existing El Camino trail with neighborhoods, Meléndez said.

"There is a sense that we need to have more ownership right here and to assist to our neighbors," he said. "If you plant a garden in an area where loitering has taken place, that may have an impact."

"Finding ways to bring back jobs to our community is huge on our list," he noted.

Ida Pérez, who lives in her mother’s home of 30 years on Scrantom Street, said that this effort also offerers residents an opportunity to envision and realize the potential of the community.

"It is a start in taking pride of where we live and making it a safe place to raise our children and grandchildren," she added. "We need to know that Clinton Ave. and its surrounding streets and areas can become again that place we all once knew years ago — a vibrant, welcoming and inviting area with its rich history of diversity and beautiful architecture, a place for families and their children. … This revitalization truly has the residents’ best interest in mind, we have the voice and we are guiding the principles for this project."