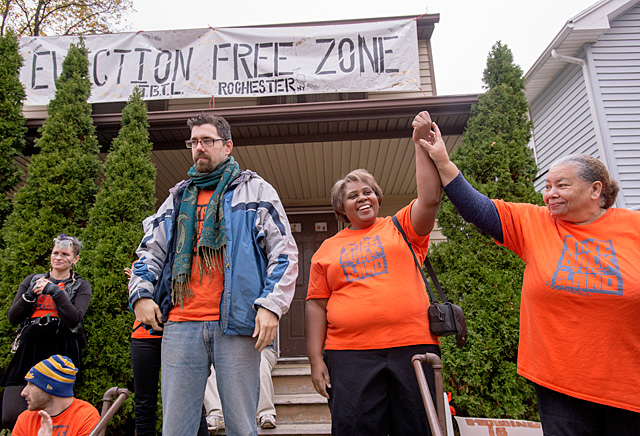 ROCHESTER — Housing is a human right.

That is the stance of members of Take Back the Land, who believe that housing and land ownership should be controlled by the community and not the banks, said Ryan Acuff, a member of the organization that has chapters around the country.

The group organizes nonviolent protests on behalf of homeowners threatened with eviction, he said. In the last five years, Take Back the Land has helped about 100 people, Acuff noted.

"We’re fighting to keep people in their homes," he said. "People can’t be evicted arbitrarily."

This advocacy is necessary, as millions of people across the county have been displaced since the 2008 recession because of the mortgage crisis, he said.

"This crisis is happening right here," he noted. "We want to shine a light."

Members of the group recently shone that light on Elizabeth McGriff, who had received an eviction notice from her home on Cedarwood Terrace in the city. They rallied in front of her house Nov. 10, even though hours earlier she had received notice that the Monroe County Sheriff’s Department had called off the eviction, which is the second time that MidFirst Bank, the mortgage holder, has called off evictions after foreclosing on the house last year.

Bank officials did not respond to requests for comment.

It is not uncommon for banks to call on law enforcement to evict homeowners, Acuff said. Police are called in to such situations because a homeowner’s refusal to leave his or her foreclosed home is considered trespassing, and such a situation is deemed a legal proceeding, noted Baye Muhammad, commissioner of the city’s neighborhood and business development.

As more than 30 people gathered in front of McGriff’s home, Acuff and other Take Back the Land members shouted, "What do we do when banks attack? Fight back," and "We’re taking over. No evictions. No foreclosures."

McGriff said that she owned her home and has lived in the two-story house for 15 years. Her ordeal began as the recession hit, and she lost her job as a case manager for a nonprofit organization. She fell behind on her mortgage payments, and she said that the bank wouldn’t negotiate with her on payments that she could afford and pursued foreclosure in 2012. In July 2014, she was informed that the bank was auctioning off her house. The initial bid was $500, and then she bid $600. The bank countered with $115,000, she said.

"They just want me out," she said. "My hope is we can work out something so I can stay in my house."

Acuff explained that a local organization is working to buy the property so McGriff can stay in her home through a U.S. Department of Housing and Urban Development clause that protects a house’s occupants upon foreclosure, according to information at http://1.usa.gov/1jhXsuk.

Rajesh Barnabas (right) signs up to receive information from Take Back the Land from representative Dave Tolar during the Nov. 10 rally.

Having Take Back the Land on her side has been helpful as she had been battling the bank on her own, since she earned too much to qualify for help from Legal Aid and could not pay for legal services, McGriff said.

"There is no place for people who can’t afford a lawyer," she said. "I fell right between the cracks."

She would encourage anyone in a similar situation to contact Take Back the Land, which has helped her with paperwork as well as providing moral support, McGriff said.

"A lot of people don’t have the power," she said of homeowners dealing with large banks. "People can stand up (though) and fight."

The Take Back the Land fight also includes fighting for tenants through Just Cause Eviction Protection ordinances that have already been adopted in such larger cities as Seattle and San Francisco, Acuff said. Just Cause statutes protect tenants from eviction by allowing landlords to evict only for certain reasons, such as failure to pay rent or for violation of the lease terms, and not because ownership of the home they are in changes hands, according to information at http://oregoncat.org/what-we-do/campaigns. Muhammad said that Rochester could not consider such an ordinance because landlord-tenant actions are dictated by state law. In New York, a landlord can only evict following court proceedings, according to information at https://www.ag.ny.gov/sites/default/files/pdfs/publications/Tenants_Rights.pdf.

Joe Martínez, a Rochester native, faced a difficult situation as a tenant when the house he rented an apartment in was sold to a bank. If not for Take Back the Land protests and advocacy, he said that he and his 12-year-old son would have been on the street just days before Thanksgiving of last year. But because the organization helped him in the legal process, his lease was honored and he stayed in the apartment until it expired in April.

A request also was made to the bank donate the property through a program for veterans, said Martínez, who served in the U.S. Army National Guard. But the bank refused, he added.

"When banks put profit over people and families, it’s unfair," he said. "People allow it. The government allows it, even though we bailed them (banks) out."

Martínez’s situation has not improved, and he is waiting to get an apartment through a local shelter program, he said.

"We’ve been technically homeless since, then going to (stay with) friends," he said. "It’s called couch surfing."

If Rochester were to adopt Just Cause protection for tenants like Martínez, such an ordinance would protect more than 120,000 people in the city and help reduce rates of homelessness, Acuff noted.

"Housing is a human right, not a commodity," Acuff said. "We are fighting to change housing laws. But this is also a larger struggle for racial and economic justice."