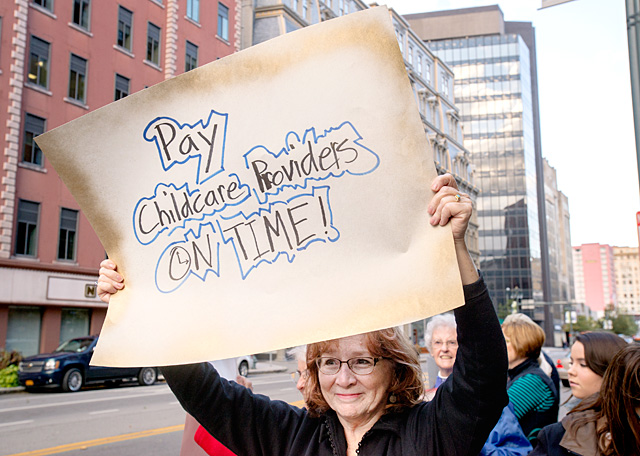 HENRIETTA — The candidates who were running for Monroe County executive were asked during a forum last month about their stances on increasing child-care funding and whether they would meet with Rochester ACTS within 30 days of being elected.

The forum was held at In Christ New Hope Ministry church and was led by Rochester ACTS, a community organizing group made up of a dozen congregations and 1199 SEIU United Healthcare Workers East.

Increasing funding for child-care subsidies to help lower-income families is the main advocacy issue this year for Rochester ACTS, which had been in development for several years before becoming official last year. For the past several months, the group has advocated for increased funding by having residents sign post cards in churches that are members of the organization as well as going door to door, explained Mario Escalante, Rochester ACTS president.

The 5,000 cards were presented in a long link in front of the Monroe County office building on Oct. 13 and sat in tall stacks in front of In Christ New Hope Ministry’s altar during the Oct. 22 forum.

"We did not want to ambush anyone," he said.

Dinolfo left before answering the questions. During an Oct. 26 phone interview with El Mensajero Católico, she said that she had met with Rochester ACTS organizers and had explained to them her support to establish a consistent level of funding to help families and child-care providers. She also said that she had reworked her schedule to arrive at the forum early but had to leave for an event that she had committed to months before.

During the forum, Frankel and Barnabas also agreed to work on doubling the number of children receiving early child-care education throughout Monroe County, paying child-care providers on time and through direct deposit, and meeting with Rochester ACTS following the Nov. 3 election.

"It’s a no-brainer," García said of boosting early childhood education to end the cradle-to-prison pipeline. "You either pay now, or pay later and pay a lot more."

He said that Rochester is on pace to experience one of the bloodiest years — more than 30 people have been murdered thus far, including a triple slaying in August. And Monroe County towns have had their share of increased crime as well.

"This is a result of not paying attention at the importance of keeping families together," by providing them such necessary resources as child care so they can be self-sufficient, he said.

Protesters hold a chain of postcards two-thirds of a mile long in front of the Monroe County Building Oct. 13 during a rally calling for expanded child care in the county.

Paying child-care providers on time also is imperative, not only to keeping small-business owners in business but so they in turn can pay their employees and keep them off the unemployment rolls or social services, explained Carlisa McCollough. The families of some of the children she cares for receive subsidies from the county that are paid directly to child-care providers.

She has operated a child-care center for nine years in Rochester, and the payment system has deteriorated in recent years, McCollough said. At times, she has found herself chasing down her mail carrier so she can get her check to the bank so it will clear on time to pay her five employees, she added. Switching to a direct-deposit system would alleviate a lot of that stress for her, McCollough remarked.

"They’re talking about poverty," she said of the attention paid to helping children and families through the Monroe-Rochester Anti-Poverty Initiative. "But I’m a small, minority-owned business. They (government officials) want us to stay in business and provide people jobs. But how can we do that if we can’t pay our own bills?"

She has lost money on overdraft fees because of late payments from the county, McCollough added.

Leah Kazmierski of East Rochester also found herself in a no-win situation when she moved back to Rochester after living for 15 years in Arizona.

A single mother with three children, she turned to the Department of Human Services for help paying for child care so she could land a job, Kazmierski said. After a successful career selling cars in Arizona, she immediately received job offers here, but the county would not provide child-care assistance until 45 days after she applied for it, she explained. But, she noted, her potential employers wanted her to begin work right away.

Church friends helped her so she could start working, but that situation didn’t last long, she said. Additionally, her job only paid $12 an hour — a major decrease in income from her prior work, Kazmierski said — and she had gone through most of her savings by that point.

She again applied for child-care assistance and received approval, only to be told funds were not available, she said.

"I lost my job," added Kazmierski, 35. "It sent me into a nervous breakdown … I found out later from all the stress."

Her family took in the children while she recovered, Kazmierski said. Five years later, she is on disability and her family has been reunited.

"It was a nightmare," she said. "I’ll do anything to hep get day care moving in the right direction. … I knew I could work, get a good job and make money. It’s got to be frustrating for anybody."

A 2014 study from the Center for Governmental Research and the Greater Rochester League of Women Voters found that the number of child-care subsidies provided in Monroe County decreased by 17 percent from 2007 to 2013. And only 22 percent of potentially eligible children were served in 2013, according to the report (http://reports.cgr.org/details/1748).

According to the report, the impact of this decreased funding included:

* A growing need for subsidies in Rochester as well as several suburbs; the number of children potentially eligible grew 52 percent in Irondequoit, 31 percent in Henrietta and 17 percent in Greece in the past decade.

"As the people of Rochester, we should ask ourselves, ‘What’s wrong here? And how can we fix it?’ " said Sister Janet Korn, RSM, justice coordinator for the Sisters of Mercy in Rochester and Buffalo.

After studying several community issues, Rochester ACTS decided the time was now to concentrate on the county’s children, especially those from low-income families who desperately need help paying for child care, she added.

"How they grow up determines the well-being of all our neighbors and all of our community," she remarked.