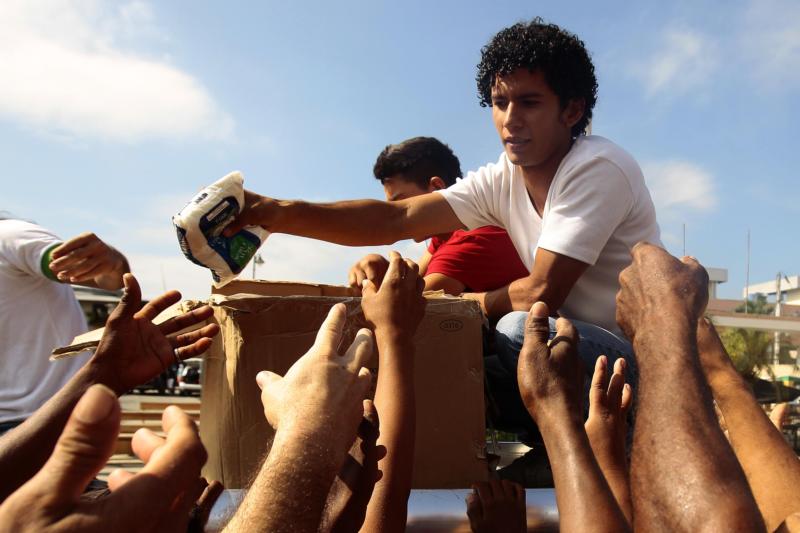 A man delivers aid to people April 19 affected by an earthquake in Pedernales, Ecuador. The April 16 magnitude-7.8 earthquake off the country's Pacific coast claimed the lives of nearly 500 people and left thousands homeless and is the worst disaster the country has faced in decades, said a top official. (CNS photo/Jose J·come, EPA) See ECUADOR-EARTHQUAKE-RESPONSE April 18, 2016.

ROCHESTER — A local group hosted a fundraiser this month to help the survivors of an earthquake that struck a coastal city in Ecuador in April.

Grupo Cultural Latinos in Rochester collected donations at the Rochester Public Market on May 7.

More than 600 people were killed and more than 12,000 injured in the April 16 7.8-magnitude quake that struck Manta, according to news reports. Families in Rochester lost family members in the earthquake, according to a press release from Grupo Cultural. Some Rochester residents’ properties in Ecuador also were damaged, and aftershocks have exacerbated the collapsing buildings, food shortages and spread of infections, according to group members.

During the May 7 fundraiser, Lorena Mendoza, a native of Ecuador, said that her parents’ home suffered damage. They will be traveling back home later this month and she expects to accompany them to personally distribute the donations the group collects. Mendoza said she also plans to take photos and video to post on Grupo Cultural Facebook page to document how the donations are helping families affected by the earthquake.

"The recovery is going to take years," she noted.

The group recently learned that donations are needed most for reconstruction and medical supplies, Mendoza said. In addition to the May 7 fundraiser, the group is also collecting donations at www.gofundme.com/rochester4manta.