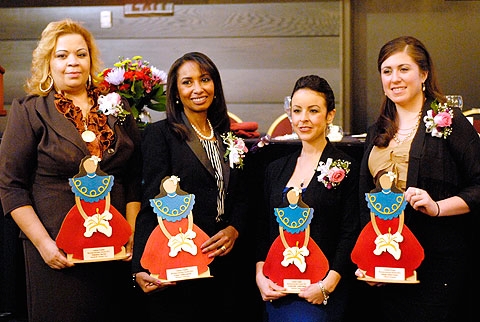 ROCHESTER — A supportive family as the foundation for success was the comment thread that ran through the words of gratitude expressed by the four women recognized during the 18th-annual Latinas Unidas Reconocimiento Awards.

"I thank my parents … who placed in me great leadership and were great mentors," said Ineabelle Geena Cruz, who was honored for her volunteer achievement in motivating youths in the community to serve others as a member of New Life Fellowship.

Cruz, a youth-employment specialist for the Monroe County Department of Health and Human Services, also will serve as president of the Puerto Rican parade next summer.

More than 200 people attended the Latinas Unidas luncheon Nov. 10, which included a performance by members of the Rochester Philharmonic Youth Orchestra. This year’s theme was "Garden of Pride."

The other honorees were:

Velázquez said that she appreciated that her brother, who nominated her, and her parents provided her with encouragement and motivation to do more throughout her life.

"Getting an education … was non-negotiable," she said. "And in today’s world, a willingness to learn is critical."

In describing Campos during the presentation of the leadership award, Marisol Ramos-López said that Campos has a smile that radiates positive energy. She also said Campos possesses a courage that began when she was a young child who stood up for a classmate who was being bullied by inviting her to a sleepover.

"If only more young people could be that brave today," said Ramos-López. "She prefers to be the silver bullet that makes things happen."

Campos said that her brother has always been her cheerleader. Her father has served as her moral compass, and her mother taught her what it means to be selfless by putting her own career on hold to raise her children and then being the model of community service. Campos’ mother, Hilda Rosario Escher, is president and chief executive officer of Ibero-American Action League.

"The apple doesn’t fall far from the tree," she joked. "I thank her for being a role model. She inspired me to want to do the same."

EDITOR’S NOTE: Look for a story about Brandy Soublet, a former youth Latina leadership honoree who now serves as a U.S. Marine Corps officer, in next month’s issue of El Mensajero Católico at www.elmensajerorochester.com.